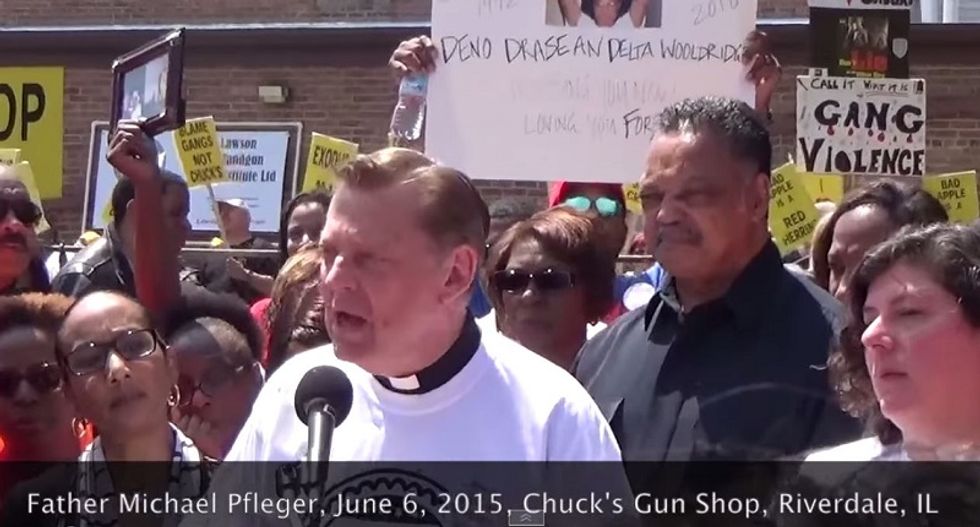 Emotions in a Chicago Catholic church ran high Thursday when the Illinois State Rifle Association urged members to voice their opinions during a talk given by Father Michael Pfleger, who has been outspoken about the role of the NRA and gun dealers in Chicago's gun violence.

Pfleger spoke at St. George in Tinley Park wearing a red T-shirt covered in photos of people killed by guns over his priest's collar. The ISRA urged as many members as possible to attend, calling the talk a gun control recruiting event, according to CBS Chicago.

People seated in the pews booed and cheered the priest as he started talking. Many also heckled attendees that sided with Father Pfleger, who is well-known on Chicago's South Side.

"I want people who own guns to be held responsible for the guns that they own," he told the crowd in a speech aired by WGN, denying that he is against the Second Amendment.

Last weekend, Pfleger gave an impassioned speech at a protest in front Chuck's Gun Shop in Riverdale, a suburb south of Chicago.

"I'm just tired, tired of the NRA. Tired of them prostituting themselves and buying politicians in this country. I'm tired of gun manufacturers and John Riggio from Chuck's making money off the blood running down our streets and our children laying in cemeteries," Pfleger said during the protest, with Rev. Jesse Jackson standing behind him. "See what I want is for Chuck's to be responsible. Title guns like cars. You title a car, title a gun."

During his Thursday speech, the priest discussed with the congregation what he believed the Catholic response should be to gun violence. WGN reports some audience members had lost loved ones, and were also heckled by pro-gun activists. At one point, a woman can be seen waving her arm and chanting "shame on you."