It's dismally apparent that some black lives matter more than others 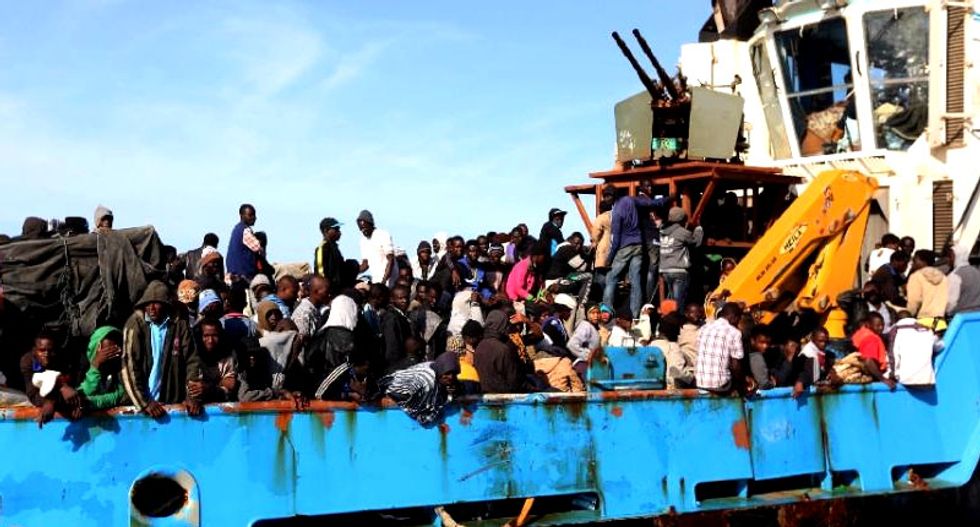 A Libyan coastguard boat carrying around 500 mostly African migrants arrive at the port in the city of Misrata on May 3, 2015, after the coastguard intercepted five boats carrying people trying to reach Europe (AFP Photo/Mahmud Turkia)

Following the killings of unarmed men and boys such as Trayvon Martin , Tamir Rice , Eric Garner and Walter Scott , the United States is entering what’s being called a new civil rights movement, with activists ensuring that the world now knows about the ongoing onslaught against black life.

Movements such as #BlackLivesMatter have been huge in their reach, spreading far beyond the US and capturing the imaginations of people of all colours and nationalities. In November, as many as 5,000 protesters marched in London to condemn the grand jury decision not to prosecute the police officer who shot unarmed teenager Michael Brown in Ferguson, Missouri . Patrisse Cullors, one of the creators of #BlackLivesMatters, said: “We are in a historical moment where we can make great shifts inside and outside US borders to ensure that #BlackLivesMatter around the world.”

But do all black lives really matter? In contrast to the thousands who protested at the US embassy in London, far fewer organised for the 900 Africans who drowned in the Mediterranean last month. So where are the protests to demand that European governments deal with this situation in a humane way?

In fact, after weeks in which viewers have been gripped by the tragic human stories of those fleeing for a better life across the Mediterranean, it seems that hearts are now hardening. British home secretary Theresa May stated uncategorically last week that “economic migrants” fleeing across the Mediterranean should be forcibly returned to Africa, slamming the door on accepting as few as 2,309 migrants under the EU’s suggested resettlement plan.

And this week EU ministers agreed to launch a sea and air mission to destroy the people traffickers’ boats . Britain is expected to offer drones and surveillance equipment. Libya, where most migrants begin their sea crossing, has already described this development as “very worrying”, believing that innocent fishermen could fall victim to the EU military.

Already the story of the refugees, and the desperation that causes them to risk their lives in the Mediterranean waters on overcrowded and barely seaworthy vessels, is being subsumed within a “war on traffickers” narrative. It says little about the migrants’ plight, assuming that everything will be solved by destroying a few boats.

May herself contrasts “legitimate” refugees – Syrians – with sub-Saharan Africans who are merely “aspirational economic migrants”’. On those ships full of the most vulnerable people in the world, African lives, it seems, have less value than others.

So why has there been so little popular outrage about these new tactics? Why haven’t there been protests about the Mediterranean situation under the banner of #BLM? Where is the solidarity when it comes to African lives? While both African-Americans and Africans remain victims of global anti-blackness, there is a far greater sense of disconnect when it comes to stories of extreme suffering in Africa. The drowned become little more than the anonymous, nameless, faceless victims we’ve come to expect from the continent. Perversely, that they die in their droves only increases their invisibility. The higher the death toll, the less we can imagine the individual life.

African-Americans on the other hand are recognisable; somewhere between Hollywood and hip-hop, they have gained a mythology. We appropriate their music, their language, their style, their swagger. Black American culture has a global reach.

Meanwhile, we are more than capable of signing petitions. More than 300,000 people called for Sun columnist Katie Hopkins’s dismissal when she talked of migrants as “cockroaches”, yet the Amnesty Don’t Let Them Drown campaign languishes at only 46,000 signatures. Perhaps this highlights online activism’s preference for simple issues. It’s pretty straightforward to get your head around the fact that Hopkins is a loathsome creature. It’s not as easy to get your head around the complex interplay of factors contributing to the current crisis in the Mediterranean.

We must not allow the governments’ lack of interest in Africans to go unchallenged. With new and increasing opportunities to make our voices heard, to take direct action, we must seize the gathering momentum to ensure that all black lives matter equally, and in doing so demand recognition of the fact that #AfricanLivesMatter too.