Jeb Bush in Berlin: Remember my dad's role in the Cold War, not my brother's in Iraq 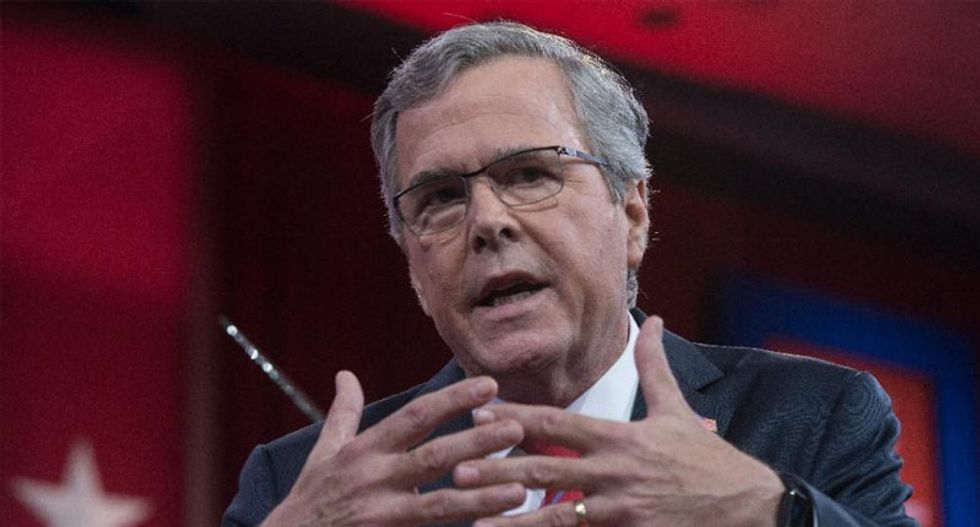 Jeb Bush evoked the symbolic power of his father’s cold war ties with Germany during a speech in Berlin on Tuesday aimed at bolstering his foreign policy credentials ahead of the probable declaration of his presidential candidacy in Miami next week.

But he made no reference to his older brother, who is still widely vilified in Germany for ordering the invasion of Iraq and for the US surveillance programs exposed by NSA whistleblower Edward Snowden.

In his first major international appearance since signaling his readiness to run for office, the former governor of Florida acknowledged that some might question the setting of his speech. “One possible question which might be asked is: why is an American politician who might run for president in Berlin, Germany? And not in places like Berlin, New Hampshire, or Berlin, Iowa?

“The short answer is, this journey has other purposes. America’s next president –whoever earns that responsibility – will have friendships here in Europe, committments here, that are vital as any we have in the world,” he told an audience of business leaders.

Berlin, he said, symbolized the “full story of America’s commitment” to its allies – “from liberation and post-war ruin, to bitter division, to peaceful unification and now, the most dynamic economy in Europe, whole and free”.

Bush was following in what has become something of a tradition for presidential candidates seeking to prove their foreign policy bona fides: during the 2008 election campaign, Barack Obama was given a rapturous reception in Berlin , though Angela Merkel famously prohibited him from making a speech in front of the Brandenburg Gate.

In a 15-minute speech that tried hard to tap into the emotional charge of cold war-era speeches by US presidents including John F Kennedy and his own father, Bush said: “This city is a reminder for the ages that freedom cannot be walled off, at least not forever.”

Most of the audience members were old enough to recall George HW Bush’s support for German reunification after the fall of the Berlin Wall 25 years ago – a stance for which many Germans continue to hold him in high regard and affection.

Jeb Bush was clearly hoping that some of his father’s magic might rub off on him, repeatedly reminding them that it was the elder Bush who – together with Germany’s then chancellor Helmut Kohl – had shown the foresight and courage to push for unification, despite the doubts of others in Germany and elsewhere.

“But Chancellor Kohl was adamant and my father was deeply supportive. The work was done. And today, because of that, Germany is whole and Germany is free,” he said.

Switching to the challenges of today, Bush called Vladimir Putin a “ruthless pragmatist” who would “push until someone pushes back”.

He described events in Ukraine as a “tragedy” and roundly praised Angela Merkel for warning at the G7 conference on Sunday that Russia would face tougher sanctions should the conflict escalate – although he failed to mention that Barack Obama had delivered even stronger criticism of the Russian president at the same meeting.

Bush instead took aim at the Obama’s administration’s early efforts to reframe relations with Moscow, saying: “We’re beginning to realise that the reset button didn’t turn out so hot.”

In another thinly disguised criticism of Obama’s foreign policy, Bush suggested that conflicts have emerged in places where the US has reduced its military presence – but he appeared to get into knots at one point when he realised that his comments could also be interpreted as a dig at his brother’s Iraq policy.

“As we pulled back from Iraq, the vacuum was filled. As we pulled back, or gave the perception at least, because I don’t think we’ve pulled back significantly in Asia ... voids are filled ... but the United States cannot pull back. It has to lead.”

Related: On the Iraq war, Jeb Bush had a terrible, horrible, no good, very bad week

It was not the first time Bush has run into difficulties on the subject of Iraq, widely seen as the signal failure of his brother’s presidency: last month he stumbled repeatedly after telling an interviewer that he would have still supported the invasion of Iraq even “knowing what we know now”.

Bush’s comments on Iraq have made him a figure of some suspicion in Germany, although Die Zeit did grudgingly call him “a better Bush” than his brother.

Bush flatly denied the recent allegations that German intelligence agents spied on European companies on behalf of the National Security Agency, shooting down a question on the topic.

But he acknowledged that the wider spying revelations exposed by Edward Snowden had damaged German-US relations.

“The Snowden revelations created real problems between Germany and the United States, that I think over time needs to be fixed,” he said. “Because this relationship trumps everything else ... But to say that we’re acting on industrial espionage, I just don’t believe to be the case.”

His address to business leaders was the highlight of a visit which included discussions with politicians and policy makers. The trip was organised by a Bush family friend, former World Bank chief Robert Zoellick, who was also involved in reunification negotiations as the elder Bush’s White House adviser.

After his speech, Bush briefly met Angela Merkel as she arrived at the forum to a standing ovation, fresh from her G7 summit success in Bavaria. The two shook hands briefly while photographers captured the encounter.

But Merkel, who nearly always sticks to her own rule not to support a candidate ahead of an election regardless of their political colours, made a swift escape, as Bush posed for pictures with other participants.

What Berliners think of Bush matters a lot less than how the speech will go down in the United States. But he remains a largely unknown quantity in Berlin.

Germans are comparatively well informed on international affairs, but only one out of eight people shown a photograph of Bush recognised him. One asked if he might be a Fifa executive, another speculated he was “someone from the EU”.

“I guess he’s been rather overshadowed by his brother,” Jürgen Blom, 38, an internet technician, said.

“It’s perhaps to his advantage that he bears no strong resemblance to GW,” said a participant at the Wirtschaftstag, the conference of the CDU’s Economic Council where Bush spoke, who did not wish to be named. “The more he stands apart from him, the better.”

In a profile of the putative candidate, the economic weekly Wirtschaftswoche said Jeb Bush would do well to distance himself from his brother, saying that in Germany the name Bush “stands for yobbishness and dilettantism, as well as for a world in which there is a belief that only the fittest should survive”.