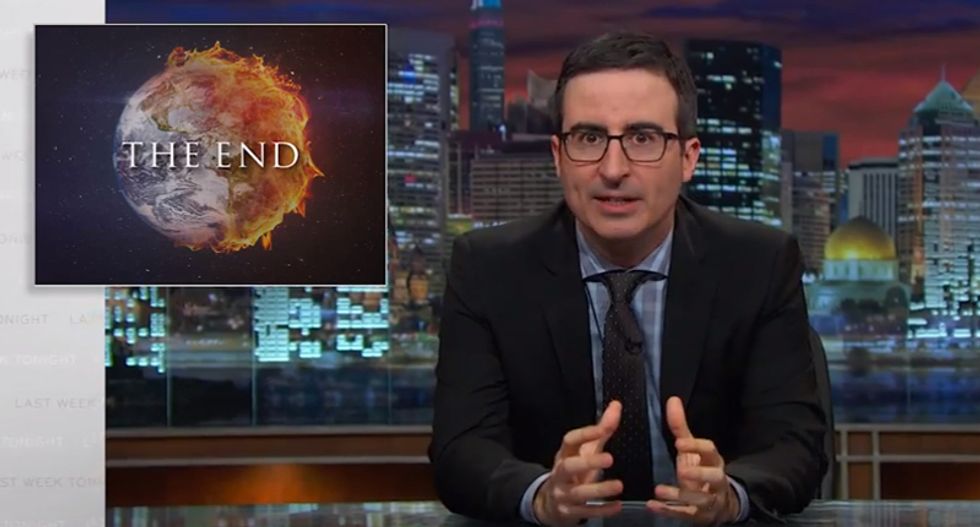 The problem when it comes to making comedy about climate change is that it’s about the world falling into an open sewer, and it’s too impersonal

Comedy = tragedy plus time. That’s the equation to make ha ha’s happen. You may not know it, but all us lot in the comedy production line just hang out riffing maths formulas and that’s how we come up with the gold. Simples. (Winky face.)

So I’m not that great at math(s) – NB I do like to keep in with the Yanks. But I can still do the sums when it comes to melting all the ice caps away with our long baths; destroying Mr P Bear’s ice house with our TripAdvising globe trots; and finishing off the fossil fuels by blowdrying our hair to bits. Once we’ve done all that it’ll be too late. There’ll be no time left for the punchline: set up and then just tragedy. The laughter will be stranded and left for dead, marooned like one of those polar bears balancing on a singular floating block of ice.

Wow, Holly, #Truthbomb! What next – you going to tell us some people don’t like Michael Gove, Putin prefers to go topless and rain is wet?

Related: Why it's good to laugh at climate change | Adam Corner

Yes, climate change banter has been a thing since forever … well I did a project on it in Geography at school – so a while. But really it’s just hummed away quietly in the corner like a old fridge – not much of a stink has been made of it and certainly not in comedy quarters. That’s weird Holly, I hear you cry, I thought nothing was off limits in comedy – cause I’ve seen you set yourself on fire, be pelted by raw meat and berate audience members dressed as a lap dancing dog, chasing that elusive laugh. Surely that’s all much more offensive than gags about carbon footprints and solar panels?

So why is there so little comedy about climate change and why’s it so hard? Comedy is truth, it’s about failure, it deals with the fall of man and the human condition – it helps us understand ourselves and the world we live in. So surely climate change is perfect fodder?

US actor and comedian Mel Brooks said : “Tragedy is when I cut my finger. Comedy is when you fall into an open sewer and die” (and he charged £500 a ticket for his show in the West End recently so he must be right?). The problem when it comes to making comedy about climate change is that it’s the world falling into the open sewer. It’s this mammoth problem too big for any of us to get our heads round, too impersonal to understand and too far removed for any of us to grapple tangibly with. Most of us feel we are not yet living directly with the consequences of climate change. Human peeps are a selfish lot bothered with the here and now and if we can’t see it it ain’t happening and we don’t care.

For comedy to work – it needs to deal with topics we relate to on a daily basis, things which we interact with on some level so the jokes can resonate. But we are not grappling with climate change on a daily basis. It’s not fashionable or part of the zeitgeist or a front page world event like a Khardashian having a baby. It’s just there like the person in the queue for the loo at Café Nero hovering over us while we quaff our americano. It may be part of the chat at a lefty north Londoner’s dinner party but no one is going to be commissioning the sitcom ‘WindFarmers’ to air after ‘Take Me Out’ on Saturday night any time soon. It’s not part of the mainstream consciousness, which leaves it as a tricky subject for audiences and comedians to find common ground.

The best way in comically, would be to make the big issue small, make the impersonal personal and find the real human moments. But when there are no distinct characters involved, no recognisable figures to ape and no reality TV stars to mock there is little to grasp hold of. Our generic personal experiences of climate change amount to someone called Al Gore about 100 years ago; struggling with storing all the plastic bags we all store forever for no reason; laughing at climate change deniers; Buzzfeed lists about bees; and having to wash out tin cans when you recycle. Actually you never bother because you don’t think they ever get recycled. Someone once told you at a dinner party that your council just puts the recycled in with the normal rubbish anyway, so you are hit and miss with it at best. And let’s face it even those jokes are recycled over and over again!

Of course someone like comedy’s reigning king, Louis CK makes it work – he transfers the whole thing into a father and child relationship we understand. John Oliver pulls it off , once again, by satirising the deniers and I don’t think I need to tell you that Russell Brand’s been soapboxing again Trewsing about the weather like a leather panted Michael Fish for the Emoji generation.

Making comedy out of the demise of the planet is a barely trodden path. The subject is heavy and demands a light touch and a willing audience. I did it once, but let’s face it, comedy much like the climate is unpredictable and at times an unforgiving, cruel mistress. (Winky face – wearing a sowester.)

Holly Burn will be appearing at the Edinburgh Fringe this year with her show Holly Burn: I am Kirsty K . She is also on Twitter @HollyBurnComedy .