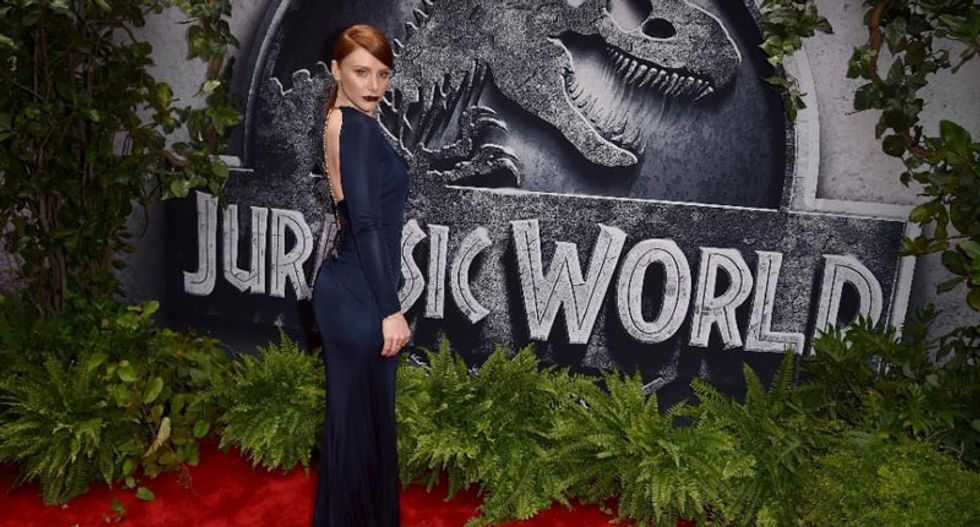 The fearsome "Jurassic Park" dinosaurs have done it again, gobbling up the competition to score the biggest worldwide box office opening weekend ever with the latest franchise.

Action-packed "Jurassic World," featuring a new and particularly lethal hybrid dino, raked in a whopping $511 million globally in its debut at cinemas, according to box office tracker Exhibitor Relations on Sunday.

That was the largest weekend take in history, eclipsing Harry Potter and the Deathly Hallows: Part 2 ($483 million in 2011), according to The Hollywood Reporter.

The unprecedented haul for "Jurassic World" -- which has had largely good, if not sparkling reviews -- was boosted by the $100 million earned in China alone and the blockbuster topped the box office in 66 countries.

"This is absolutely a four-quadrant movie and is working on so many levels. The release date was awesome and everybody stayed off of our date," The Hollywood Reporter quoted Universal domestic distribution chief Nick Carpou as saying.

In addition to Chris Pratt as chief dinosaur-keeper and Bryce Dallas Howard as the park's overzealous marketing guru, the cast of the film includes a multi-ethnic array of actors.

Co-produced by Steven Spielberg -- who directed the first two of the four films -- "Jurassic World" takes us back to the island theme park where scientists first revived T-Rex and Co for paying customers more than two decades ago.

Paul Dergarabedian, a media analyst at Rentrak, told AFP that "Jurassic World" benefited from something of a perfect box-office storm.

"Nostalgia, legacy, pedigree: Three things that can make a newly updated franchise a monster," he said.

"There are many reasons 'Jurassic World' is eating box office records like a hungry Indominus Rex: the original 'Jurassic Park' was the second coming of 'Jaws' and was for many the film that defined in the psyche their personal definition of the summer movie experience.

"At the time 1993's 'Jurassic Park' was released it was the first film to ever open with over $50 million and as such was seen and loved by a massive audience that were at once repelled and thrilled by its science-run-amok premise, its homage to the dinosaurs that everyone grew up learning about and were intrigued by in grade school.

"And not least of all, the collective movie theater popcorn experience that the iconic superstar director Steven Spielberg delivered."

Universal Pictures had also been smart with its marketing of the film, he added, noting that broadcaster NBC in the US had been showing the orignal in the run-up to the latest release to drum up interest.

"Jurassic World" dwarfed its rivals at theaters in North America at the weekend, bumping comedy espionage spoof "Spy" to second place, with a relatively paltry $16 million.

"Spy" stars Melissa McCarthy as a CIA analyst with a ho-hum desk job but a knack for being a hero in risky missions carried out by others.

But this time, she goes deep undercover in the world of arms trafficking when two agents -- played by Jason Statham and Jude Law -- get in trouble, and works to head off a global disaster.

Mega-disaster epic "San Andreas," which topped box office sales in its debut two weekends ago at $54.6 million, was in third place as the blockbuster summer season gathers pace, at $11 million, according to Exhibitor Relations.

The big-budget spectacular stars Dwayne Johnson as a rescue pilot teaming up with his estranged wife to save their daughter after earthquakes unleash chaos on Los Angeles and San Francisco.

The film's title refers to a real-life and much-feared major geological fault in California.

It is a prequel to the story of a family connected to the spirit world, and here a psychic contacts the dead to help a teen targeted by a supernatural entity.

President Joe Biden is scheduled to address America on Thursday as Congress prepares to advance his "Build Back Better" agenda.

"After hearing input from all sides and negotiating in good faith with Senators Manchin and Sinema, Congressional Leadership, and a broad swath of Members of Congress, President Biden is announcing a framework for the Build Back Better Act. President Biden is confident this is a framework that can pass both houses of Congress, and he looks forward to signing it into law. He calls on Congress to take up this historic bill – in addition to the Bipartisan Infrastructure Investment and Jobs Act – as quickly as possible," the White House said in a statement.

With apologies to Paul Simon, and despite all of the information available to the mortal man, there are still millions of Americans who currently believe they're gliding down the highway when in fact they're slip slidin' away.

As President Biden prepares to travel to Europe to meet with the Pope and our NATO allies next week, there remains a huge national security problem for him to grapple with, one that hasn't been addressed in any meaningful fashion for many years.