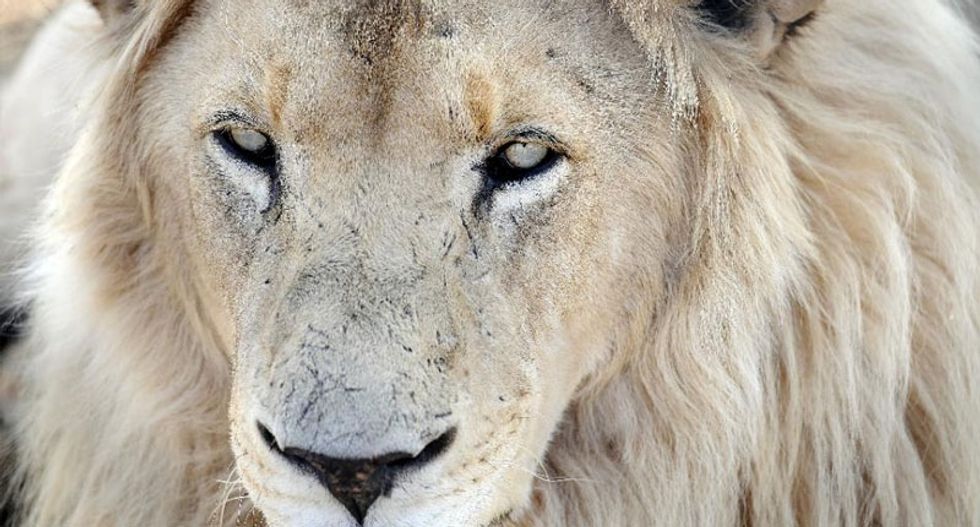 The incident occured at the The Lion Park, on the outskirts of Johannesburg (AFP Photo/Stephane de Sakutin)

The mighty lion, reclusive cave crabs and the world's rarest sea lion are among nearly 23,000 species at risk of dying out, a top conservation body warned on Tuesday.

In an update to its "Red List" of threatened species, the International Union for the Conservation of Nature hailed some clear advances in saving endangered species like the Iberian Lynx.

But, it warned, those successes have been overshadowed by declines in a range of species, with 22,784 species of animals and plants threatened with extinction.

Pointing to successes in increasing the populations of the long critically endangered Iberian Lynx and Guadalupe Fur Seal, she insisted "effective conservation can yield outstanding results."

Following six decades of decline, the population of the Iberian Lynx, considered the world's most endangered feline, has seen its numbers swell from only 52 adult cats in 2002 to 156 a decade later, IUCN said.

Intensive work to restore the rabbit populations the large spotted cats prey on, along with monitoring for illegal trapping and conservation breeding has allowed the species to move from the Red List's "critically endangered" to the "endangered" category, it said.

Reintroduction programmes in Spain and Portugal and compensation paid to landowners who made their properties compatible with habitat requirements had also played a role, IUCN said.

The Guadalupe Fur Seal, which was twice thought to be extinct due to overhunting in the late 1800s and early 1900s has also seen its numbers increase, IUCN said.

The silky sea mammal native to the west coast of California and off the Guadalupe islands of Mexico has now moved from the "near threatened" to the "least concern" category, largely thanks to the enforcement of laws like the USA Marine Mammal Protections Act, it said.

That, however, is still 10 times fewer than before humans started hunting the seal for its dense, luxurious underfur, IUCN said.

A range of other mammals have meanwhile fared far worse, due to hunting and the destruction of their natural habitats.

The lion remains listed as vulnerable at a global level, with its western African subpopulation listed as "critically endangered" due to over-hunting and dwindling prey.

Rapid decline has also been recorded in eastern Africa, which historically has been a stronghold for lions, IUCN said, warning that trade in bones and other body parts for traditional medicine in Africa and in Asia was a new and emerging threat to the species.

The organisation also highlighted the decline in the extremely reclusive African Golden Cat, a cinnamon-coloured feline about twice the size of a house cat living in central Africa, which is now listed as "vulnerable".

And it pointed to the New Zealand Sea Lion -- one of the rarest sea lion species in the world -- which now is listed as "endangered", due mainly to disease and changes to its habitat caused by fishing.

IUCN also warned that two species of crab, Karstama balicum and Karstama emdi, found only in a single cave on the island of Bali, are now considered "critically endangered", as they have been increasingly threatened by growing tourism and numerous religious ceremonies held in the cave.