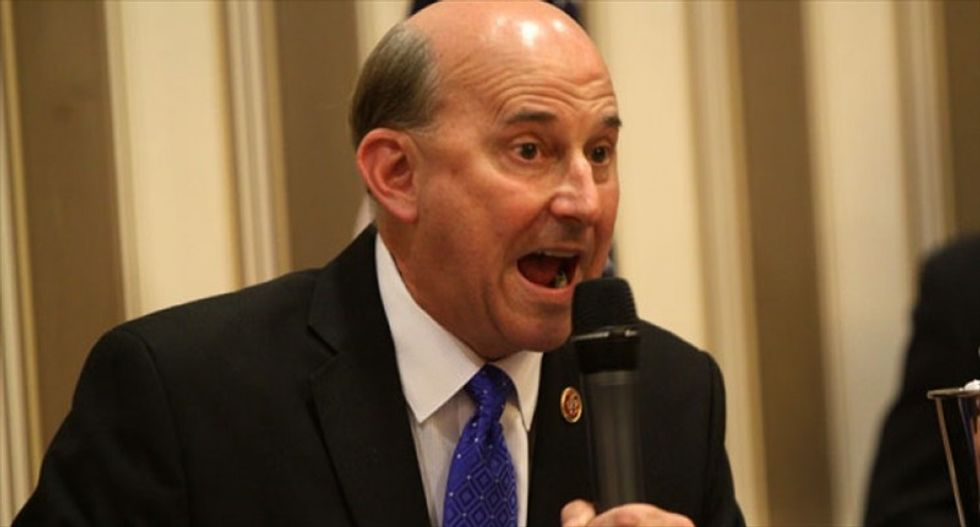 Texas Rep. Louie Gohmert added himself to the Christian conservative chorus complaining on Friday about the Supreme Court decision legalizing same-sex marriages, releasing a statement that invoked not only the Bible, but multiple former presidents.

"Founders and leaders including George Washington, Abraham Lincoln, Franklin Roosevelt, John Kennedy, Ronald Reagan and most all of the Presidents have noted that it is God who has been the source of this nation’s unfathomable blessings," Gohmert stated. "But if Moses, Jesus, and contributors to the Bible were correct, God’s hand of protection will be withdrawn as future actions from external and internal forces will soon make clear. I will do all I can to prevent such harm, but I am gravely fearful that the stage has now been set."

Gohmert, who invited anti-LGBT pastor and Fox News contributor Robert Jeffress to deliver a prayer in the House of Representatives late last year, and also encouraged black communities to discriminate against the LGBT communities, also recycled the conservative argument that Justices Ruth Bader Ginsburg and Elena Kagan should have recused themselves from the case because they had presided over same-sex weddings in the past.

"When Justices of the highest court in the country believe they do not have to comply with essential laws governing courts themselves, then there is no overriding legitimate law of the land, which action standing alone is enough to substantiate tyranny," Gohmert argued.

He also complained that the five Justices in the majority were unelected, predicting that the decision would bring about "turmoil."

"“It is a tragic and ominous day for the United States when a decision by five unelected justices of the U.S. Supreme Court blatantly violates the law in order to destroy the foundational building block for society provided by Nature and Nature's God -- that was stated as divine law by Moses and Jesus," he said.

Gohmert's only online statement since the ruling was a link to his remarks, as seen below:

It's a tragic day for the #US when a decision by five unelected justices of #SCOTUS blatantly violates the law... http://t.co/vFGfbK2IeX
— Louie Gohmert (@Louie Gohmert) 1435334533.0