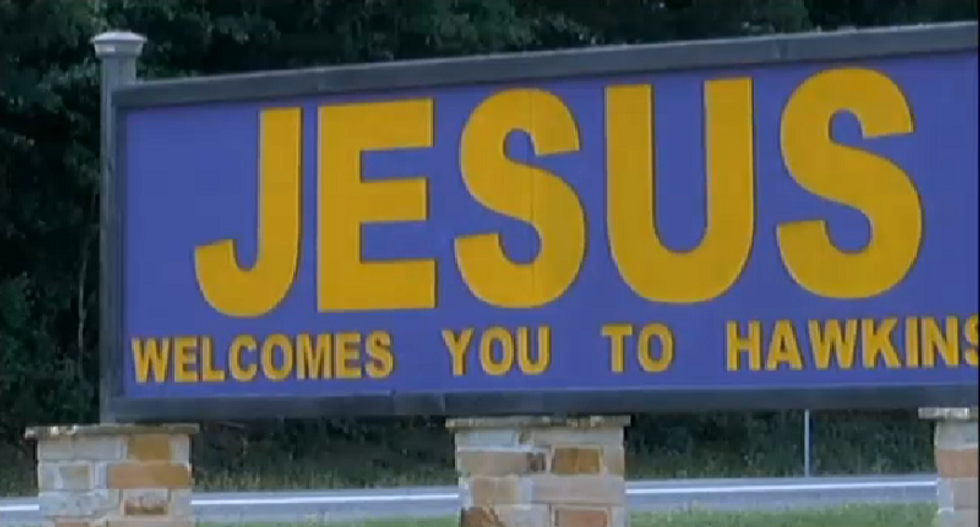 A Texas town is heatedly debating what to do with a large sign on public property that reads, "Jesus Welcomes you to Hawkins," with the town's mayor this week stating if their sign comes down, so do all signs across the country referencing Superman.

"If you don't believe that Jesus existed then he would be fiction,” Hawkins mayor Will Rogers told local television station KLTV. “If he's fiction, and you want to remove his name from everything, then you have to remove every fiction name from across the country. That means we couldn't say 'Superman welcomes you to town.'"

Residents packed into City Council chambers Monday night, mostly to voice impassioned support for keeping the sign. But doing so could be costly.

The sign is loud - 18 feet and purple with gold lettering. It's located on city-owned property at Highway 80 and Blackburn Street. The Freedom From Religion Foundation (FFRF) caught wind of it and on June 1 sent the city a letter saying it violates the Establishment Clause of the US Constitution separating church and state, KLTV reports. The sign has been there since 2011.

Last week, Rogers defended the sign, saying it was a community project approved by the City Council, local KMOO reports. He also said "you can't pin one religion on Jesus."

Monday, Hawkins residents were up in arms.

"I say come and take it, baby," one man says. "Draw the line." Later he adds he doesn't like "Northern aggression."

Another woman voiced fear that taking the sign down would result in a snowball of secularism.

"Rest assured, it will not stop with one sign," she says. "When is the day coming when they're gonna take it from our own private property?"

One resident had a solution she hoped would be a compromise without putting the tiny city of 1,300 through an expensive lawsuit.

"We can move the sign, we can make it bigger, we can do whatever we want with it once it's on private property," she said on Monday.

As of now, the city is looking into whether the sign is in fact on public property before moving forward, KLTV reports.

Watch the report from KLTV here: