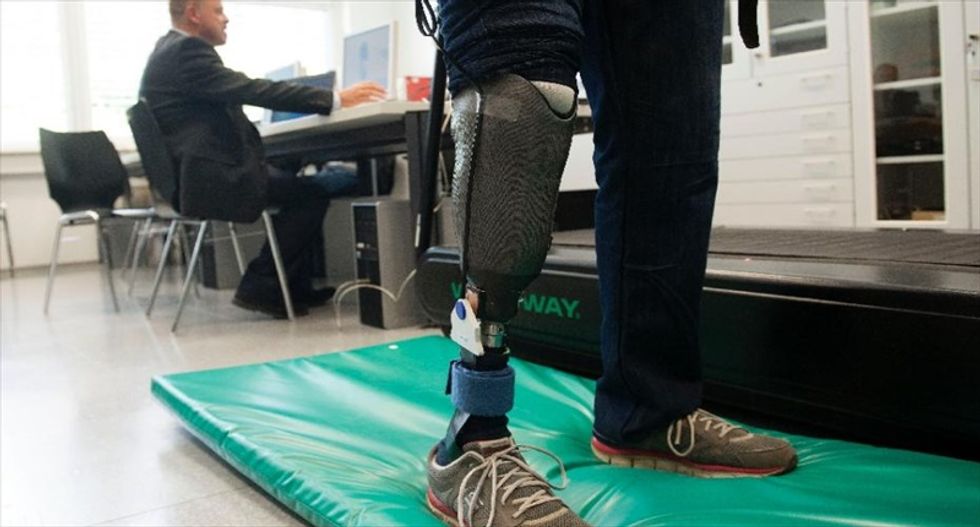 The world's first artificial leg capable of simulating the feelings of a real limb and fighting phantom pain was unveiled by researchers in Vienna on Monday.

The innovation is the result of a two-fold process, developed by Professor Hubert Egger at the University of Linz in northern Austria.

Surgeons first rewired remaining foot nerve endings from a patient's stump to healthy tissue in the thigh, placing them close to the skin surface.

Six sensors were then fitted to the foot sole of a lightweight prosthesis, and linked to so-called stimulators inside the shaft where the stump sits.

"It's like a second lease of life, like being reborn," Austrian amputee Wolfgang Rangger, told AFP ahead of Monday's media launch.

The former teacher, who lost his right leg in 2007 after suffering a blood clot caused by a cerebral stroke, has spent the last six months testing the new prosthesis.

"It feels like I have a foot again. I no longer slip on ice and I can tell whether I walk on gravel, concrete, grass or sand. I can even feel small stones," he said.

The 54-year-old also runs, cycles and goes climbing. When he moves, the limp is barely noticeable.

Every time Rangger takes a step or applies pressure, the small sensor devices send signals to the brain.

"In a healthy foot, skin receptors carry out this function but they are obviously missing here. However, the information conductors -- the nerves -- are still present, they're just not being stimulated," Egger said.

"The sensors tell the brain there is a foot and the wearer has the impression that it rolls off the ground when he walks. All things considered, the procedure is a very simple one given the results."

This is not the first time the Austrian scientist has caused a stir with his research.

In 2010, he presented a mind-controlled prosthetic arm, which the user directed with motor neurons previously connected to the lost limb.

For the artificial leg, the principle remains the same except that the process works in reverse: information is guided from the prothesis to the brain, rather than the other way around.

In addition to increasing balance and safety, the prosthesis provides another remarkable function: it has helped eradicate the excruciating pain Rangger had experienced for years following his amputation.

"I was barely able to walk with a conventional prosthesis, didn't sleep for more than two hours a night and needed morphine to make it through the day," he recalled.

But within days of undergoing the operation last October, the pain vanished.

As Egger points out, phantom pain occurs because the brain gets increasingly sensitive as it seeks information about the missing limb.

"Plus the amputation is often tied to a traumatic experience like an accident or illness, and the mind keeps reliving these memories," he noted.

The advantage of the "feeling prosthesis" is that the brain once again receives real data and can stop its frantic search.

"Rangger is a very different person now to the one I met in 2012," Egger said.

The two men were introduced to each other at a support group for amputees.

"It struck me that he never laughed and he had these dark rings under his eyes. It was awful."

Importantly, post-surgery recovery is quick and there are no known health dangers associated with the intervention, he added.

"The only risk is that the nerves don't reconnect properly and the feelings fail to return," he said.

With the new technology ready, Egger now hopes that small companies will join his venture and start building the prosthesis to help bring down the market price.

Egger believes his latest project could vastly improve quality of life for amputees, including in developing countries.

"People with amputations aren't patients in the traditional sense, they aren't sick –- they're just missing a limb," he said.

"By giving them back mobility, they also regain their independence and are able to reintegrate into society. That's what I work for."

On Monday, WKRG News reported that a suspect in a bank robbery in Navarre, Florida decided to try an unusual means of fleeing the scene: taking a taxi.

"Santa Rosa County Sheriff Bob Johnson said to rob the bank, Shelton ordered a taxi from the Johnny on the Spot Taxi service," reported Daniel Smithson. 'Elijah Shelton, who after this will be referred to as 'the genius,' decides he wants to rob a bank in Santa Rosa County,' Johnson said. 'Normally, you grab a fast car so you can get away and everything. He calls a cab to his house.' Shelton arrived at the bank, Johnson said, and went inside demanding cash. Shelton got away with about $8,300, gets back into the cab and is dropped off back at his home, according to Johnson."

MSNBC host Nicolle Wallace was once a dedicated Republican staffer to President George W. Bush. Now, she's accusing her former allies of being an anti-democracy movement.

Speaking to former Republican Party Chairman Michael Steele, she showed an interview Fox's Chris Wallace did with Rep. Jim Banks (R-IN) in which the congressman hedged both that he believed Joe Biden was the lawfully elected president of the United States, but that he had concerns over the election.

On Monday, the Associated Press released the results of its latest polling on the new president. Joe Biden enjoys an approval rating of 63 percent over four months. When it comes to his response to the covid, it's even better. Seventy-one percent of Americans give him a thumbs-up, including nearly half of Republicans (47 percent). The survey also "shows an uptick in Americans' overall optimism about the state of the country. Fifty-four percent say the country is on the right track, higher than at any point in AP-NORC polls conducted since 2017; 44 percent think the nation is on the wrong track."

This is one of two polling stories I want to share. The other poll was leaked to the Post over the weekend. A survey of battleground districts, it was conducted by the National Republican Congressional Committee (NRCC). Its results were reported during a recent gathering of GOP leadership, but a key part was suppressed. Why? Because it showed support for the former president is much softer than generally believed. "Trump's unfavorable ratings were 15 points higher than his favorable ones in the core districts, according to the full polling results … Nearly twice as many voters had a strongly unfavorable view of the former president as had a strongly favorable one."

US ship fires 30 warning shots at Iranian boats in Strait of Hormuz: Pentagon