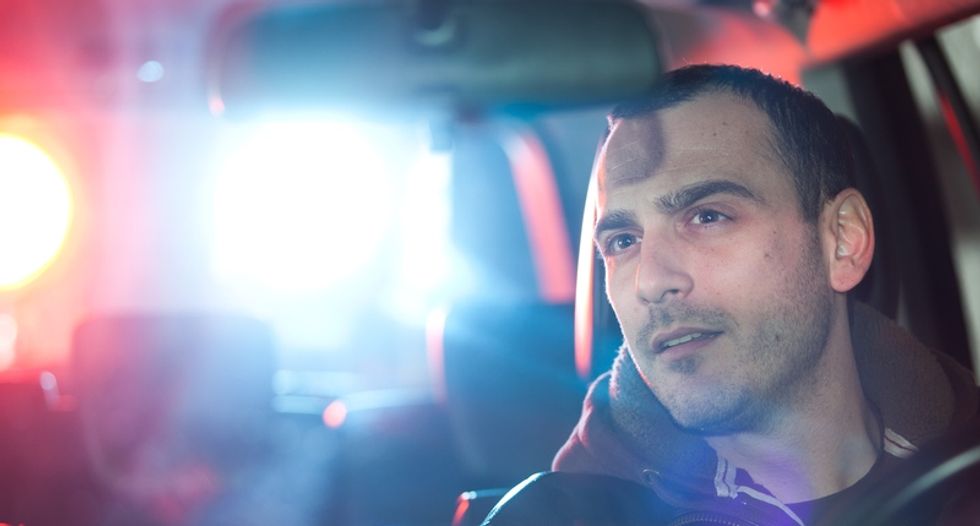 A man gets pulled over (Shutterstock)

A New York judge has dismissed the case against Adam Rupeka, a man from Troy who raised his middle finger in the direction of a cop -- and who got pepper sprayed in the face, assaulted, handcuffed, and detained in return, the Saratogian reports.

Baker has reportedly been on administrative leave since supervisors learned of his May 16 attack on a citizen who had committed no crime. Still a member of the force, Baker is now suspended without pay pending a disciplinary hearing to take place within the next 30 days. The Saratogian reports that Police Chief Greg Veitch "will be seeking Baker’s termination."

Rupeka says he will pursue a civil case against Baker, and is weighing legal options regarding action against the department.

Earlier this month, Rupeka -- who works for CopBlock, police transparency advocate -- was driving "near the Hampton Inn in downtown Saratoga Springs," with two running cameras set up in his car. As he passed by, Rupeka flipped off a cop to test whether the officer would respect his first amendment right to free speech.

The officer, who happened to be Baker, did not.

In a WNYT video clip of the incident, Baker approaches Rupeka's car after pulling him over, and demands the citizen's license and information. Through an open driver's side window, Rupeka tells Baker he will do that, if Baker can "articulate what crime I've committed."

Baker articulates, "Step out of the vehicle," as he removes a can of pepper spray from his pocket and begins shaking it. "You're under arrest for disorderly conduct," Baker says, and sprays burning liquid directly into Rupeka's face.

Commanding Rupeka again to "step out of the vehicle," Baker grabs Rupeka's arm, and twists it backwards out the window.

"You gonna comply?" Baker demands, twisting Rupeka's arm farther upward and back. Rupeka, whose head is pressed against the steering wheel at this point, grits his teeth and emits a painful groan: "I can't." The officer twists the driver's arm still more until Rupeka relents, and exits the vehicle with Baker still pulling on his arm.

The video clip ends with Baker putting Rupeka in handcuffs and escorting him away from the vehicle.

On its Facebook page, CopBlock describes itself as "a decentralized project supported by a diverse group of individuals united by their shared goal of police accountability... documenting police actions whether they are illegal, immoral or just a waste of time and resources then putting direct pressure on the individuals responsible (ideally while recording and then later sharing), we can work together to bring about transparency and have a real impact... We do not “hate cops.” We believe that no one – not even those with badges – has extra rights. The failure to realize and act on that is to our detriment. By focusing the disinfecting light of transparency on public officials we safeguard not just our rights but those of future generations."