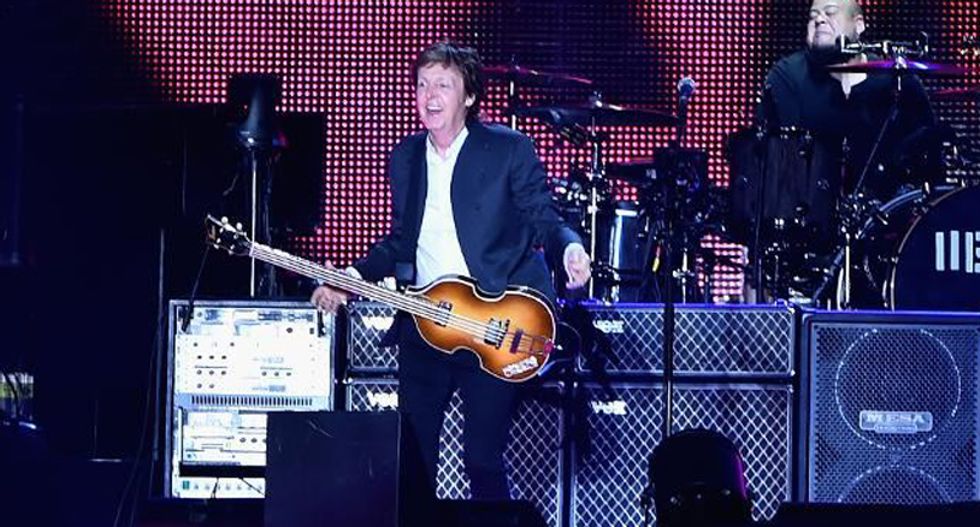 Paul McCartney dedicated a Beatles ballad to the victims of the Charleston church massacre as he voiced hope for peace among races.

The former Beatle enjoyed a rapturous welcome by thousands Friday night as he played the Firefly Music Festival in the eastern US state of Delaware, where another British music legend, Morrissey, offered his own, more provocative brand of on-stage activism.

Early in a two-and-a-half-hour set on a steamy night, McCartney played "The Long and Winding Road" -- the melancholy 1970 song that spoke of The Beatles' breakup -- in tribute to the nine African Americans gunned down at a historic Charleston, South Carolina church by a suspected white supremacist.

McCartney called on the momentarily hushed audience to "take a moment to pray for peace and harmony among the people of different colors."

He returned to the theme with The Beatles' "Blackbird," with its call to "take these broken wings and learn to fly."

McCartney recalled that he recorded "Blackbird" in 1968 as he looked at racial tensions engulfing the United States and added: "It has echoes today."

But the rock icon was not exclusively somber, as he delighted the crowd with Beatles classics such as "Can't Buy Me Love," "Helter Skelter" and "Live and Let Die," electrified by pyrotechnics on stage and fireworks overhead.

McCartney also dedicated songs to his late bandmates John Lennon and George Harrison and played a cover of "Foxy Lady" by Jimi Hendrix, as he spoke fondly of his time with the late guitar visionary.

McCartney, sweaty but with unmistakable stamina, turned 73 on Thursday. He was starting the latest US leg of his "Out There" global tour that opened more than two years ago.

Choosing a different path than the crowd-pleasing McCartney, Morrissey was characteristically unflinching in confronting the audience with his views.

Showing solidarity with the burgeoning US protest movement against alleged police brutality, Morrissey sang underneath a video montage of officers roughing up citizens -- including the notorious 1991 beating of Los Angeles motorist Rodney King.

"They say, 'To protect and to serve' / But what they really mean is / Get back to the ghetto," Morrissey sang as he brought out his relatively obscure song "Gangland."

But Morrissey faced the most emotive response as he showed grotesque images of the slaughter of animals, most writhing in pain, for "Meat is Murder," the title track of his former band The Smiths' cult classic 1985 album.

The video was presumably kept from a previous concert in Tel Aviv as it was subtitled in Hebrew and highlighted Israeli slaughterhouses.

Such videos are a mainstay of concerts by Morrissey, a staunch vegan. But the footage was clearly not anticipated by much of the Firefly audience, which was strikingly small for a Morrissey show and dominated by half-attentive revelers.

Several young men held up their middle fingers and chanted "KFC!", in response to Morrissey's denunciation of the fast food chain, although the jeerers were drowned out by applause.

Morrissey generally insists that his venues go vegetarian, with New York's Madison Square Garden complying for his June 27 concert, but Firefly was meat-heavy with the closest food stands to his stage including "Cheesy Pig" and "Sausage Haus."

Morrissey ended with the hard-charging Smiths track "What She Said," delivering an intense version reminiscent of the performance on the former band's live album "Rank," with drummer Matt Walker concluding at Firefly by trashing his kit.

Set in the woods near the Dover International Speedway, Firefly started in 2012 in hopes of giving the US East Coast a major music festival in the league of California's trend-setting Coachella.

Some 90,000 people are attending this year's four-day event, the first time Firefly has sold out.

While many festival promoters face local tensions, Firefly has enjoyed support as officials take notice of the rapid rise of festivals in the United States, said Greg Bostrom, its director.

As if to reinforce the point, Delaware Governor Jack Markell showed up and voiced enthusiasm -- not only for the economic impact to his small, tourism-friendly state, but for the music.

Citing recommendations from his son, the 54-year-old governor said he was most excited to see indie rockers Spoon.