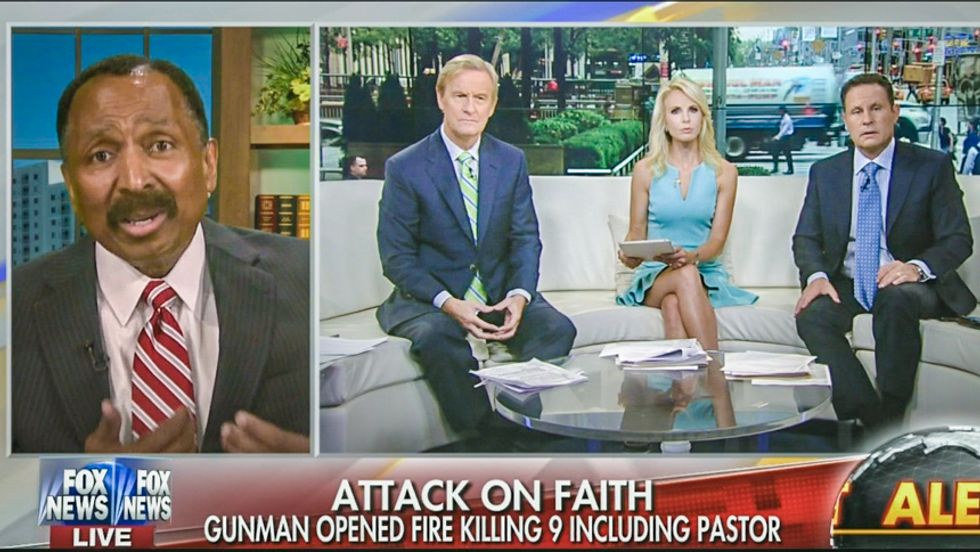 Conservative pastor E.W. Jackson, a former Republican candidate for lieutenant governor in Virginia, told Fox News on Thursday that all clergy should be armed because a white South Carolina shooter attacked a historically black South Carolina church for it's "biblical views," not because of racism.

At a press conference early on Thursday, Charleston Police Chief Greg Mullen released photos of a white man who was suspected of gunning down nine people at Emanuel AME Church in what was described as a "hate crime."

"You rape our women and you're taking over our country. And you have to go," witnesses recalled the gunman saying.

Speaking to the hosts of Fox & Friends on Thursday morning, Jackson encouraged viewers to "wait for the facts."

"But I'm deeply concerned that this gunman chose to go into a church because there does seem to be a rising hostility against Christians across this country because of our biblical views," Jackson opined. "And I just think that it's something that we have to be aware of and not create an atmosphere in which people take out their violent intentions against Christians."

He "urged pastors and men in these churches to prepare to defend themselves" by carrying firearms.

"It's sad but I think we've got to arm ourselves," Jackson insisted. "Look, I'm a pastor. If someone comes in to hurt my church members, I have an absolute obligation to defend them, to protect them."

"Extraordinarily, they called it a hate crime," Fox News host Steve Doocy noted. "Some people look at it because it was a white guy apparently and a black church. But you made a great point just a moment ago about the hostility toward Christians -- and it was a church -- so maybe that's what they're talking about."

"And we need to be looking at that very closely," he concluded.