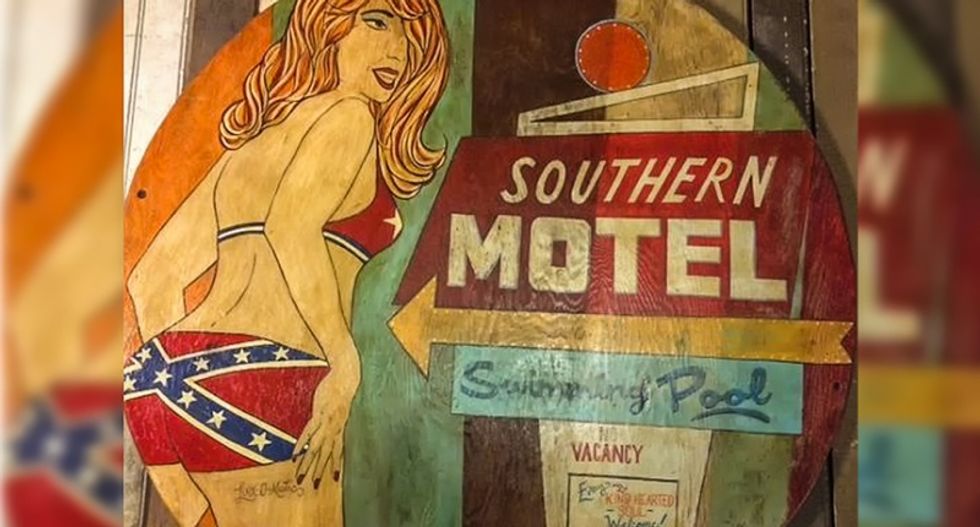 A Nashville restaurant has agreed to take down a piece of artwork featuring a woman wearing a bikini with a Confederate flag design.

The Tennessean reported over the weekend that Acme Feed & Seed removed the artwork, in which a Confederate flag can be seen on a woman's bikini bottoms, after one of its investors, Democratic mayoral candidate Charles Robert Bone, asked that it be taken down.

"In light of the recent events, Acme Feed & Seed has removed the piece of artwork so as not to confuse anyone about Acme's, our investors' and our supporters' commitment to all people of Nashville," Acme Feed & Seed owner Tom Morales told the paper in a statement on Saturday.

But supporters of Bone like the black pastor of North Nashville's Jefferson Street Missionary Baptist Church, Rev. James "Tex" Thomas, suggested that complaints targeted at Bone over the artwork had really been meant to distract from comments his rival made about the recent mass killing at a black church in Charleston.

At a debate on Thursday, centrist Democratic candidate Bill Freeman had suggested that the Charleston massacre was "not necessarily about racial profiling," and instead pointed to mental illness.

He later backtracked, saying that the murders were "obviously racially motivated."

"I have known Charles Robert Bone and his family for decades, I know their character and I know their heart," Pastor Thomas said in a statement. ""This accusation is obviously a misguided attempt by a flailing campaign to draw attention away from their own unfortunate, insensitive, out of touch mistakes. What is more telling is that this accusation is leveled by a Facebook group that was politicized after the Charleston massacre in attempt to capitalize on the situation. It saddens me that someone would stoop to this level instead of raising us up."

Artist Shelia B. Ware argued that her work had been misinterpreted.

"Anyone that has a vision, and not a set of blinders on, can view my artwork and see that there is a message that is not divisive," she said. "I have a message of inclusion. It is social commentary, and anyone seeing my work as anything other than opposing a divisive culture is delusional and s***-stirring at best."

For his part, Bone explained in a statement that he had never seen the artwork until it was brought to his attention recently.

"I'm an investor in this restaurant and proud of it," Bone insisted. "We've created a lot of jobs and supported Nashville's tourism economy. Acme has over 500 artifacts in it, and I've not seen this particular one."

"Anyone who knows me knows I don't support any symbol, gesture or word that is offensive to any community. I've asked the operator to remove this one as I don't want it representing Nashville, and anyone who knows me understands that. I appreciate this being called to my attention so I can address the issue openly."

Watch a video clip below of the Nashville mayoral debate.