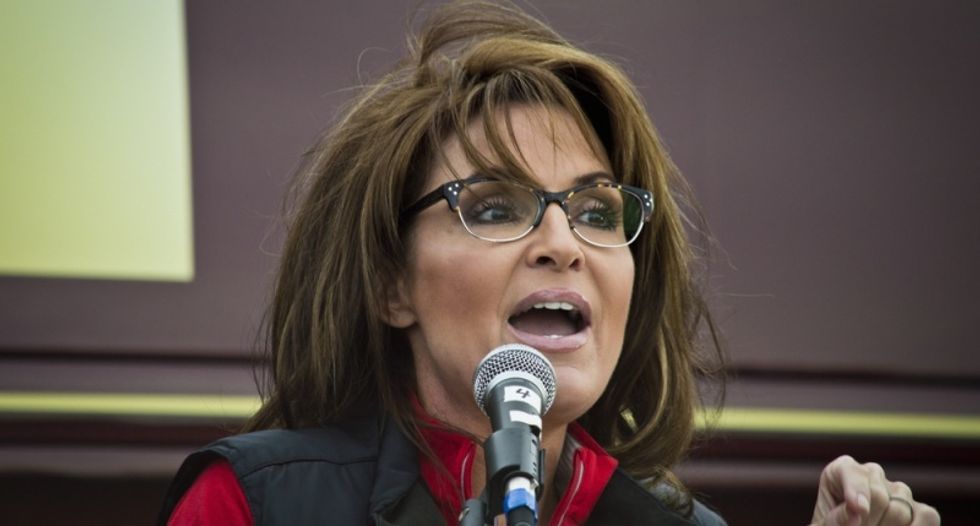 Former Alaska Governor Sarah Palin says "Big Daddy government" is enslaving American women, and calls on a new generation of feminists to declare independence not from men -- but from Big Brother.

In a Facebook post Monday titled, "Hey Girls! You Don't Need No Stinkin' Government to Succeed!," Palin encouraged conservative minded ladies with political aspirations to attend the Young Women’s Leadership Summit in St. Charles, Illinois. The political action committee that bears her name, SarahPAC, is sponsoring this week's conference of about 175 right-wing high school and college activists from around the country.

"These aren’t your mother’s feminists," Palin says of convention attendees. She writes that a new, tech-savvy generation of women leaders are "studying tools and techniques to spread an empowering, genuine feminist message back on their college campuses this fall. This gives us hope for America! The girls are going rogue!"

"The motto here is 'women don’t need government to succeed,'" Palin continues. "Right on! I admire them embracing one of the most politically incorrect positions the Leftist PC Police goes ballistic over – the truth that God has equipped women to be capable and courageous enough to make it without Big Daddy government enslaving us under its freedom-killing control."

Right-leaning women organizing classmates on college campus are the "vanguards of commonsense conservative activism," Palin says. "This is no surprise for anyone who’s witnessed the Mama Grizzly phenomenon!"

"The empowering truth that 'women don’t need government to succeed,'" Palin says in closing, "reminds our next generation that they don’t need 'big brother' for success, any more than they need a man for fulfillment, any more than a fish needs a bicycle. THAT'S the message of genuine feminism, and I’m heartened to see conservatives return to our roots and live it. Ladies, 2016 is time to put the heels on and take the gloves off! Best wishes on a successful summit!"

According to its website, the conference will have plenty of speakers for students to hear from, as well as programming designed to develop attendees' political leadership capabilities back home.

"Training sessions," the Young Women’s Leadership Summit's official description reads, "will cover a wide range of topics including how to organize on campus, how to plan and execute events, how to message conservatism on campus, how to launch a career in conservative politics, and how to use social media to advance conservative ideas.  We’re teaching the cutting-edge community organizing tactics of the left, and each of our Summit attendees will leave with an action plan so that they can be effective and efficient activists in their own campuses and communities."