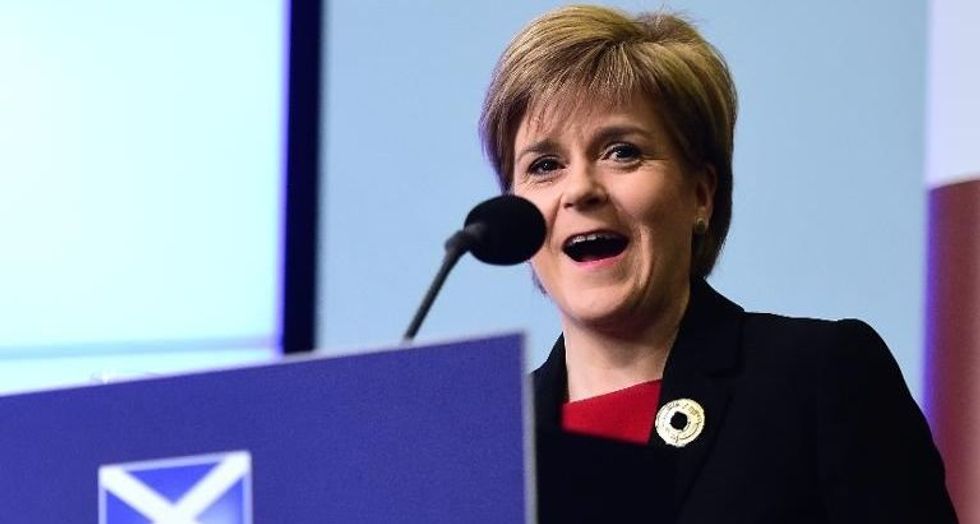 Scotland's First Minister Nicola Sturgeon lived up to her false billing as a comedian on cult US satirical programme "The Daily Show" -- provoking laughter from the audience as she sparred with host Jon Stewart.

The Scottish National Party leader -- fresh from her success in last month's British general election -- is in the United States on an official four-day trip for engagements in New York and Washington DC.

Sturgeon lost no time in setting the record straight on the popular late-night show after the programme's website had earlier listed her as a comedian.

"You billed me on your website as a comedian -- so you've raised all these expectations that I'm going to be funny," Sturgeon told the show's host Stewart.

"I'm a politician, and as you know, politicians are rarely very funny."

Amid laughter from the audience Stewart reassured Sturgeon she would be fine, saying: "You need not worry. They thought I was going to be funny for 17 years."

Stewart and Sturgeon discussed the SNP's electoral success in the May 7 poll, in which her party took an unprecedented 56 of 59 seats available in Scotland.

"I've ordered an inquiry into how come we didn't win the other three (seats)," Sturgeon joked.

"What, you think you're Saddam Hussein? You [want] 99 percent? Fifty-six out of 59 is pretty good!" Stewart jibed in response.

Sturgeon was following in the footsteps of former British prime ministers Tony Blair and Gordon Brown, although the former Labour leaders were grilled by Stewart after they left office.

Asked by Stewart whether Scotland could survive if it achieved independence -- the long-term goal of the SNP -- Sturgeon cited a list of the country's achievements.

"Scotland almost invented the modern world - the television, the telephone, penicillin, all of the these things were invented in Scotland so of course we can stand on our own two feet," Sturgeon said.

"You don't usually ask permission," the Scottish leader fired back.