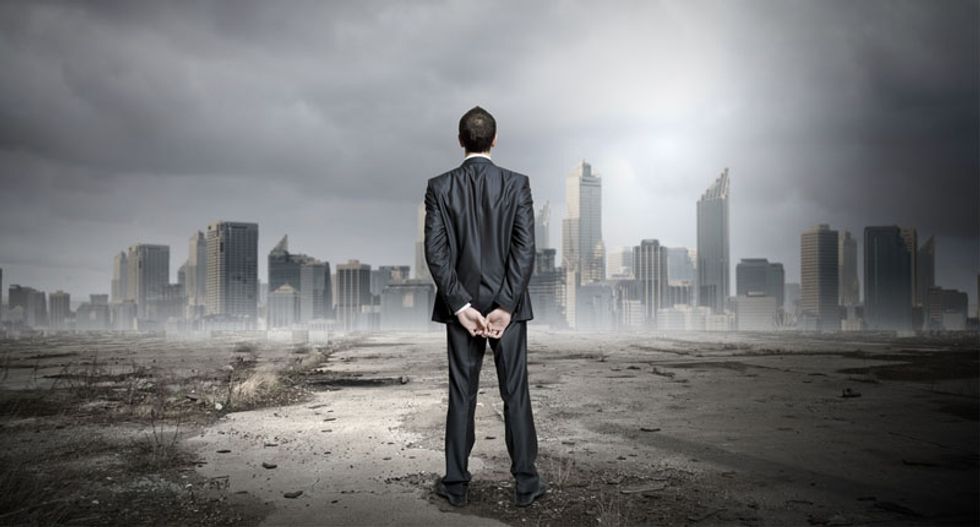 The secretive funders behind America’s conservative movement directed around $125m (£82m) over three years to groups spreading disinformation about climate science and committed to wrecking Barack Obama’s climate change plan, according to an analysis of tax records.

The amount is close to half of the anonymous funding disbursed to rightwing groups, underlining the importance of the climate issue to US conservatives.

The anonymous cash flow came from two secretive organisations – the Donors Trust and Donors Capital Fund – that have been called the “ Dark Money ATM ” of the conservative movement.

The funds, which when channelled through the two organisations cannot be traced to individual donors, helped build a network of thinktanks and activist groups. These worked to defeat climate bills in Congress and are mobilising against Environmental Protection Agency rules to reduce carbon pollution from power plants which are due to be finalised this summer. In many cases, the anonymous cash makes up the vast majority of funding received by beneficiaries – more than comes openly from the fossil fuel industry.

“The conservative thinktanks are really the spearhead of the conservative assault on climate change,” said Riley Dunlap, a sociologist at the University of Oklahoma who studies environmental politics. “They write books, put out briefings and open editorials, bring in contrarian scientists ... They are an immense megaphone that amplifies very, very minority voices.”

Organisations funded through the secretive donors operations are also working to roll back measures promoting wind and solar power and block planning for future sea-level rise in state capitals.

To trace how the money was spent, the Guardian obtained annual tax filings made to the US Internal Revenue Service by the Donor’s Trust and Donor’s Capital Fund and cross-checked grantees with organisations associated with the climate change counter-movement.

In 2011, 42% of funding, or $35.7m, went to groups promoting climate denial and opposed to environmental regulations, according to the tax filings.

In the last presidential elections in 2012, when Obama fended off a challenge from Mitt Romney, that figure jumped to 51% of the funds directed through Donors Trust and Donors Capital Fund – a total of just over $49m.

In 2013, the last year for which tax records are available, 46% of anonymous funding to conservative groups through the two Donors channels, or just over $41 million was spent that way.

Robert Brulle, a professor at Drexel University who first exposed the conservative network of think tanks and activist groups of the climate change counter-movement, said those funds helped hone opposition to regulations.

“It is a well-oiled, complicated, cultural and political machine of the right wing of the conservative movement,” he said.

In 2013, the two organisations took in just over $152m, distributing $90m to a constellation of groups. However, the ultimate sources of those funds were untraceable, an important consideration for companies or individuals wanting to avoid bad publicity for rejecting the scientific consensus on climate change.

“All these corporations that were getting bad press realised they can still fund conservative thinktanks,” Dunlap said. “Exxon or BP can still fund one of these things while doing all these great things on climate change to reduce emissions etc.”

Whitney Ball, the chief executive of Donors Trust and Donors Capital Fund, said the funds were set up to “promote liberty and help like-minded donors preserve their charitable intent”. She said that grants were made at the request of account holders, not the Donors Trust or Donors Capital Fund. “Our role is to ensure that recommended grants are to IRS-approved public charities, and we require that the charities do not rely on significant amounts of revenue from government sources,” she said.

Almost all of the thinktanks and activist groups on the Donors rolls work on a broad range of topics – and in most cases there was no way of tracking what portion of funding went to climate change related work.

But all of the groups have a record of rejecting climate science and fighting environmental regulations.

“You don’t have to be an outright science denier to try to prevent action on climate change,” Brulle said.

“You’ve got gradation – it’s not real; it’s real but we are not sure how much humans are contributing to it; I am not a scientist. There are all sorts of strategies.”

Funds sent through Donors Trust and Donors Capital Fund were allocated to 92 organisations that deny climate change or oppose environmental regulations – but only 24 organisations got donations of $1m or more over the past three years.

By far, the biggest overall beneficiary was the Franklin Centre for Government and Public Integrity , which received $22m over the three years. According to its website , the centre “trains and supports journalists working to detect and expose corruption and incompetence in government at the state and local levels”. It runs a network of online conservative websites in state capitals which are generally hostile to clean energy and pro-coal.

In 2011, the anonymous funding through Donors Trust amounted to 95% of Franklin’s budget, according to an investigation by the Centre for Public integrity.

Erik Telford, the president, denied that there was a conflict between the Franklin Centre’s watchdog mission, and its failure to disclose the ultimate source of its funds.

“As is the case with almost any news outlet in America, we have an editorial perspective, with a mission to expose government misdeeds, advance liberty, and look out for the taxpayers’ interest,” he said. “We welcome the support of citizens who believe in our mission, and afford them the right to privacy as established in the supreme court’s 1958 NAACP v Alabama decision.”

The Federalist Society, a networking group for conservative lawyers and justices which calls on states to reject the EPA authority to regulate carbon pollution, received $8.7m over the past three years.

Another top recipient, the State Policy Network, a network of ultra-conservative thinktanks, received a total of $8.2m over the last three years.

Thinktanks allied with the State Policy Network have worked with the American Legislative Exchange Council, a pro-business lobby, which has sought legislation to penalise homeowners who install solar panels.

The Hudson Institute, a Washington think tank whose climate expert opposes cuts to greenhouse gas emissions, took in $7.9m over three years. The Heartland Institute, which sent a delegation to Rome in April to try to upstage meetings between the Pope and the United Nations chief Ban Ki Moon on climate change, received $3.8m.

Another big beneficiary of the anonymous funds, the Competitive Enterprise Institute, which has received $4.3m over three years, claims on its website that climate change is its biggest programme.

The thinktank would not respond to requests for comment.

The Committee for a Constructive Tomorrow, whose communications director is Marc Morano, took $3.7m from donors in 2012 – its most ever. A year later, however, the organisation received $325,000.

New reporting from The Daily Beast reveals that advisers to Trump-backed Georgia Senate candidate Herschel Walker have serious reservations about his fitness for the job.

A person described as a "closely connected adviser" to Walker's Senate campaign has shared internal campaign messages with the publication that show a chaotic candidate who is mistrusted by his own campaign staff, who also express concerns that he "isn’t mentally fit for the job."