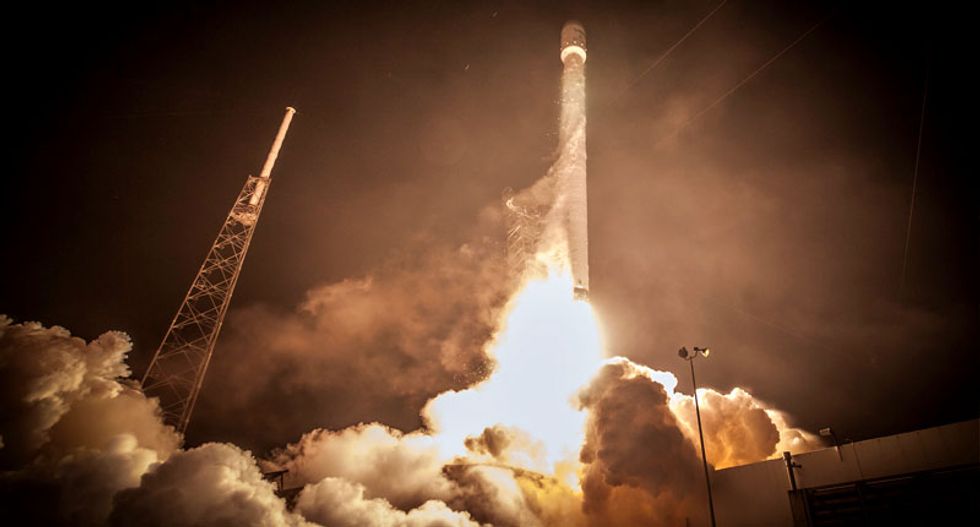 An unmanned SpaceX rocket exploded about two minutes after liftoff from Florida on Sunday, destroying a cargo ship bound for the International Space Station in the latest in a string of mishaps in supplying the orbiting outpost.

The 208-foot-tall (63-meter) Falcon 9 rocket had flown 18 times previously since its 2010 debut, all successfully. Those missions included six station cargo runs for NASA under a 15-flight contract worth more than $2 billion.

However SpaceX, a company founded and owned by technology entrepreneur Elon Musk, has twice previously tried and failed in an experiment to land the rocket on a platform in the ocean.

Sunday's accident soon after liftoff from Cape Canaveral Air Force Station was the second successive botched mission to resupply the space station. A Russian Progress cargo ship failed to reach the outpost in April following a problem with its Soyuz launcher.

The cause of Sunday’s explosion was not yet clear, officials said.

"This was a blow to us. We lost a lot of research equipment on this flight," NASA Associate Administrator Bill Gerstenmaier told a news conference.

The explosion also marks a setback for SpaceX, or Space Exploration Technologies. The company was poised to compete for the first time against United Launch Alliance, a joint venture of Lockheed Martin Corp <LMT.N> and Boeing Co <BA.N> and the current sole launch provider for military and spy satellite launches, to launch a GPS III satellite.

An investigation into the explosion will ground the Falcon 9 rockets for "a number of months or so" but less than a year, SpaceX President Gwynne Shotwell told the news conference.

A preliminary analysis indicated a problem with the rocket's upper-stage engine, Musk said on Twitter.

The company had hoped to use the rocket’s discarded 14-story-tall first stage in an innovative landing test, part of its overall goal to refurbish and refly its rockets, slashing launch costs.

A platform had been stationed in the Atlantic Ocean in hopes of serving as a landing pad. Instead, the rocket broke apart in mid-air. Recovery teams were dispatched to attempt to collect debris for analysis.

Two previous experiments, in January and April, came close to succeeding but technical problems caused the rockets to crash into the platform.

The International Space Station crew - two Russian cosmonauts and an American astronaut - has about four months of food and supplies on board, so the loss of the cargo shipment does not pose an immediate problem for them, said NASA station program manager Mike Suffredini.

The station is expected to be returned to its full, six-member crew in July. But if food or water supplies dwindled to 45 days, some of the crew could return home via the Russian Soyuz capsules that are parked at the outpost.

Russia hopes to return its troubled Soyuz rocket and Progress cargo ship to flight on Friday. Japan is slated to fly its HTV capsule to the station in August.

The accident occurred just before the rocket was to discard its first stage two minutes and 39 seconds after liftoff.

Despite the explosion, one SpaceX customer voiced support in the company and the Falcon 9.

"One inevitable failure for such a young system should not in any way shake anyone's faith in the rocket or the team. What's amazing is that it took this long to happen," said Mike Gold, business operations director with Nevada-based Bigelow Aerospace.

The Dragon capsule was loaded with 5,461 pounds (2,477 kg) of food, clothing, equipment and science experiments for the space station, a $100 billion research laboratory that flies about 260 miles (420 km) above Earth.

Dragon is the only one of the four cargo ships flying to the station that can return science experiments and gear to Earth. The other spacecraft - Russia’s Progress, Orbital’s Cygnus and Japan’s HTV - burn up in the atmosphere after they make their deliveries and are released back into space.

Equipment lost aboard Dragon include a spacesuit, water filtration equipment, an oxygen tank and a docking system so space taxis under development by SpaceX and Boeing can park at the station. NASA hopes to turn over crew transportation to the U.S. companies before the end of 2017, breaking Russia’s monopoly.

Including its station cargo runs for NASA, SpaceX has a backlog of nearly 50 missions, worth more than $7 billion, including dozens of commercial communications satellites.

SpaceX holds a second NASA contract, worth up to $2.6 billion, to upgrade its Dragon capsule to fly astronauts to the station. Boeing’s contract is worth up $4.2 billion.