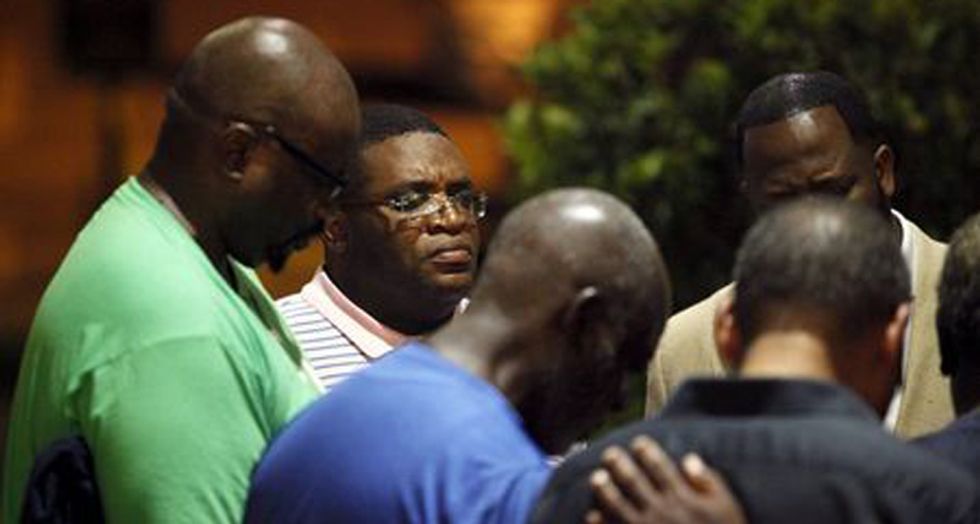 A small prayer circle forms nearby where police are responding to a shooting at the Emanuel AME Church in Charleston, South Carolina June 17, 2015. (REUTERS/Randall Hill)

A white gunman was still at large after killing nine people during a prayer service at an historic African-American church in Charleston, South Carolina, the city's police chief said on Thursday, describing the attack as a hate crime.

The gunman had yet to be caught hours later and was considered extremely dangerous, he said.

"To have an awful person come in and shoot them is inexplicable, obviously the most intolerable and unbelievable act possible," Charleston Mayor Joe Riley told reporters. "The only reason someone could walk into a church to shoot people praying is out of hate."

The shooting recalled the 1963 bombing of an African-American church in Birmingham, Alabama, that killed four girls and galvanized the civil rights movement of the 1960s.

The Charleston church is one of the largest and oldest black congregations in the South, its website says. It has its roots in the early 19th century, and was founded in part by a freed slave who was later executed for organizing a revolt, according to the U.S. National Park Service.

The attack follows the April shooting of an unarmed black man in neighboring North Charleston by a white police officer. The officer has been charged with murder in that case, one of a number of deaths of unarmed black men in encounters with police that have raised racial tensions in the United States.

The community reacted with shock and grief after Wednesday's shooting.

"I'm heartbroken," said Shona Holmes, 28, a bystander at the aftermath of the shooting. "It's just hurtful to think that someone would come in and shoot people in a church. If you're not safe in church, where are you safe?"

The FBI, the Bureau of Alcohol, Tobacco, Firearms and Explosives and other agencies have joined in the investigation, Mullen said.

Eight victims were found dead in the church, Mullen told reporters, and a ninth person died after being taken to hospital. One other person was wounded and was being treated at a local hospital, Mullen said, adding that there were other survivors.

None of the victims were immediately identified. But the Reverend Al Sharpton, the New York-based civil rights leader, said in a tweet that the Reverend Clementa Pinckney, the church's pastor and a member of the state Senate, was among the dead.

Early on Thursday morning, Mullen released photos taken from the church of the suspect, as well as of a black sedan he was seen leaving in. Mullen added there was "no reason to believe" that he was not in the Charleston area.

President of the Charleston NAACP, Dot Scott, told the local Post and Courier newspaper that a survivor told family members that the gunman first sat in the church before rising and opening fire. The shooter told her he would let her live so she could tell others what had happened, according to Scott.

After the shooting, a bomb threat was reported near the church, Charleston County Sheriff's Office spokesman Eric Watson said, and people who were gathered in the area were told by police to move back.

Mullen said that the all-clear had been given after checks following the bomb threat.

A police chaplain was present at the scene of the shooting, and a helicopter with a searchlight hovered overhead as officers combed the area.

Following the attack on the church, Republican presidential candidate Jeb Bush, the former governor of Florida, canceled an appearance in Charleston that had been scheduled for Thursday morning.

"Governor Bush's thoughts and prayers are with the individuals and families affected by this tragedy," his campaign team said in a statement.