Tim Robbins: 'I know Republicans who love their children and are not evil' 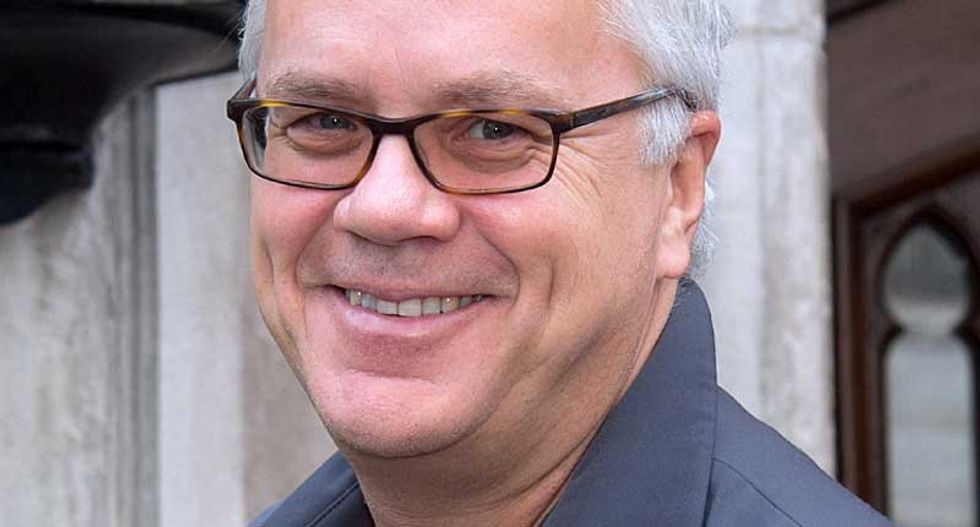 He’s one of Hollywood’s biggest stars, but these days you’re more likely to find Tim Robbins on stage. He talks about shouting at Fox News, punk Shakespeare and finding common cause with Clint Eastwood

The sun is low in the sky when Tim Robbins strides into view in the grounds of the amphitheatre in Lyon . He is 56, tall (6ft 4½ inches “with a temper” as he once put it) and his white shirt is unbuttoned. He stoops to greet me beneath a cluster of cherry trees in the sloping gardens and I notice he has the combination of stature and softness that suggests a kindly fairytale character — a Silver Giant, rather than a Selfish one. His hair, a mishmash of grubby grey and bright white, is swept back in a mane that nearly reaches his collar.

In his two signature roles, as an innocent man imprisoned in The Shawshank Redemption , and as a victim of child abuse victimised again in adulthood in Mystic River ( for which he won an Oscar ), he was made to seem pitiful. His size seemed to give him further to fall, more to lose. He has used his body equally well to get laughs, not least as a gormless, oversexed pitcher in Bull Durham , the brilliant 1988 baseball comedy which gave him a breakthrough hit as well as a partner (his co-star, Susan Sarandon , from whom he separated in 2009). He still turns up in the occasional part but films don’t seem to interest him much these days. While he is a celebrated film-maker, Oscar-nominated for Dead Man Walking , he hasn’t directed one for 16 years. “They’re not doing those kinds of movies any more,” he tells me. “Or, if they are, they’re doing them for $10. And they want you to get a major star before they give you that $10.”

Theatre, his first love, is taking up most of his time, and in particular the Actors’ Gang , which he founded nearly 35 years ago. He mentioned the company in his Oscar acceptance speech and it is with them that he has come to Lyon. His spare, inventive production of A Midsummer Night’s Dream has toured the world for the past year. On the evening we meet, it is about to be performed under the stars at Les Nuits de Fourvière , a two-month festival of theatre, music and dance. (He will also play a gig with his band, the Rogues’ Gallery , which specialises in good-natured rock. A folk tinge has been passed down from his late father, Gil, a member of the Highwaymen .)

Why, I wonder, is it an actors’ “gang”? “We were a bunch of punk rockers when we started out,” he explains, settling into a chair beneath the tree and pulling a cigarette from a pack of Natural American Spirit (“100% organic tobacco”). “We had that aesthetic: we’ve got each other’s backs.” Early shows could be shambolic. “Then we acquired a discipline for our anarchy.” Recently the group hit a crisis. “In changing management, we found that our old management had…” He takes a long draw on his cigarette and picks a ladybird off his wrist. “Things had been done which had left us in debt. I had to rally the troops. It was one of those moments where you say, ‘Is this it?’” After some fundraising, A Midsummer Night’s Dream was mounted. They were in the enchanted forest but they weren’t out of the woods. “We were still struggling economically so I put a mandate out that we had to do the show for $500. That forced us to really get creative. How do you make a forest without a set? Well, you do it with actors.”

I'm less likely now to judge people. I can see someone is angry yet not have to engage

Productions such as this represent only one branch of the work of the Actors’ Gang. Pride of place in Robbins’s affections belongs to the Prison Project , the brainchild eight years ago of the company’s British member Sabra Williams . The group, led by Robbins and Williams, goes into jails in the US for improvisation workshops; they have had an immediate and beneficial effect on the prison population. Robbins says he never had any qualms about the project, which is now a permanent fixture. “Not one. We do exactly the same thing with the prisoners as we do with our actors. Same training, using masks and make-up and improvisation. It transforms them. They’ve told us that it puts them in touch with emotions they haven’t felt in years. If ever. It helps them deal with their incarceration. It provides a new openness for them to communicate with their families. Guards have told us that it has an effect on how prisoners relate to one another — these people are reaching out across racial lines, rival gang members are bonding. ”

Acting has unlocked emotion for Robbins too. “It continues to expand my empathy,” he says. “I’m less likely now to judge people. I can see someone is angry yet not have to engage.” Having children — he has two sons, aged 26 and 23, by Sarandon —has helped. “You don’t want to be getting into a power struggle with a six-year-old.” His voice is languid and soothing. The temper he once acknowledged flares up less nowadays. He is first amused, then apologetic, when the photographer recalls the last time they met: “The paparazzi had been on your back. You were well fucked off.” A quick exchange of information establishes that this was in the early 00s. Robbins was likely being hounded over his opposition to the Iraq war . In the wake of their protest, he and Sarandon had been disinvited from a Bull Durham anniversary event held by the Baseball Hall of Fame. “Crazy times,” he sighs.

Prisoners in his acting workshops aren’t the only ones who have cottoned on to the downside of tribalism. The same thought occurred to Robbins when he was directing a production of 1984 . He realised that the “two-minute hate” that Orwell imagined, in which citizens scream at the TV screen, was part of his own life, only it involved watching news programmes that demonised the right, or getting riled at Fox News. “Maybe it’s no accident.” He stubs out his cigarette thoughtfully on the heel of his shoe. “Maybe the design is that we stay divided.”

For years, he was caricatured, along with Sarandon and their Dead Man Walking collaborator Sean Penn , as a bleeding-heart Hollywood liberal. (He is among those lampooned in Team America: World Police .) His political allegiance hasn’t switched. He’s very forgiving of Obama, for instance: “I happen to think he approached office with good intentions.” But his outlook has altered since his right to free speech was defended during the Iraq war by the sort of industry figures, including Clint Eastwood and Kevin Costner , who might not naturally be his political allies. “I know Republicans who love their children and are not evil. We might disagree on a lot of things but there is common ground. I know some Republicans who acknowledge climate change. I don’t think it gets us anywhere to be in a constant battle.”

That's such a strange thing [sending $500 cheques to 10 Republicans]. I think I was angry at some Democrats over the war

Even so, it was downright perverse of him to send cheques for $500-a-piece to 10 Republicans in 2006 . “Yeah, that is such a strange thing,” he laughs, as though we are discussing crop circles or spontaneous human combustion. “I called my accountant and said, ‘Was this real?’ I really don’t remember what happened. I think I was angry at some Democrats for supporting the war. There was an article. In a men’s magazine. It said, ‘Here are some candidates that are not so awful.’” He is talking in slow, faltering sentences, trying to make sense of this contradictory evidence. “I don’t think I can get my money back.” He’s giggling now. “I can’t deny I did it. I was following bad advice.”

Whatever the reason, he seems happy to have contributed some good-natured mischief to the world. It is into that category that his rambunctious version of A Midsummer Night’s Dream also falls. A few hours later, as Robbins joins the curtain call beneath a spotlight provided by the full moon, he is wearing a smile that looks ready to spill off the sides of his face. Cushions on which the audience have been sitting rain down on him and his cast. Making his exit, he slips backwards on one, only to transform the mishap into a full-blown slapstick moment: he turns each subsequent step into an identical stumble, his arms windmilling, so that it appears to have been his intention all along to play the goofball. He looks like he’s having the time of his life.