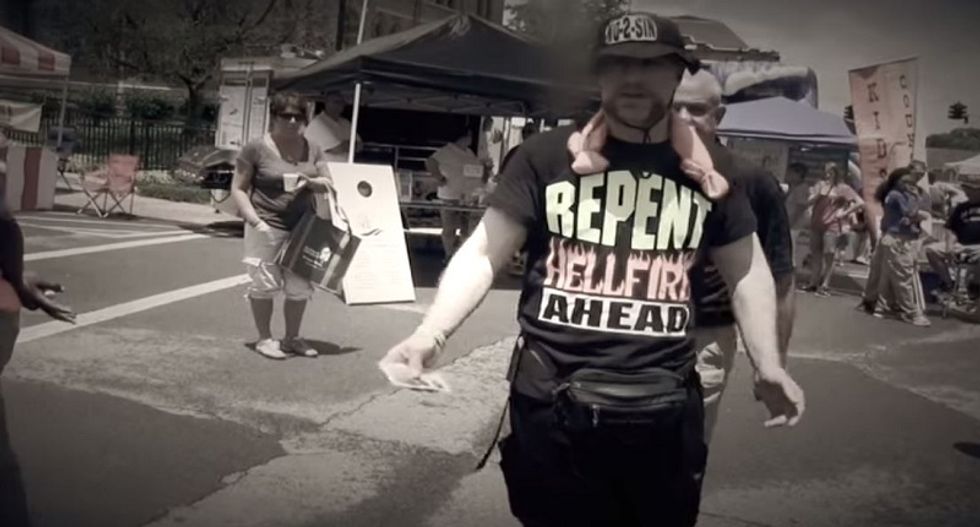 Two street preachers who got in people's faces and tried to instigate fights with Springfield, Tennessee's "Taste of Country" festival goers were arrested Saturday, the Tennessean reports.

Police arrested John Laymond Davis, 49, of North Carolina and John McGlone, 54, of Kentucky on disorderly conduct charges. Both were released the same day on bond.

Video of the incident posted to McGlone's Facebook page, shows the men, along with several others including a young boy, wearing clothing emblazoned with messages like "Repent," "Trust Jesus" and "Fear God" confronting festival goers and then police. It's accompanied by dramatic theme music.

Springfield police Chief David Thompson told the Tennessean the group was instructed to "tone it down" and "follow the code of conduct posted for the event. But they were exhibiting aggressive behavior."

They became belligerent, calling people sinners and telling them they were going to hell, Thompson said. They were carrying around a photo of an aborted fetus and were "looking for a fight."

Springfield Chamber of Commerce vice president of operations Jordan Osborne said the men harassed her and called her a "jezebel."

"When you see people wanting to fight, it's scary," she told the Tennessean.

The video shows the men with the rest of the group standing outside the jail, apparently after being bailed out, talking about proselytizing other prisoners.

Crashing outdoor community events to tell unsuspecting people they're going to hell seems to be the M.O. for the group. Another video posted to McGlone's Facebook page shows them at Mardi Gras with "rebukes to the God haters."

The video shows him facing a young woman with a megaphone, saying, "but Jesus Christ, you know what he'll do for you? He'll give you a new heart. He'll make all things new. He'll clean you up. You'll no longer have to be a whore any more."

View the video of the Springfield incident, from McGlone's Facebook page here:

Problems with the launch of Donald Trump's "TRUTH" social media platform continue to pile up as Gizmodo's Lucas Ropek writes that observers are pointing out there is evidence the beta version of the website contains what appears to be stolen code.

In just a few days, the conservative social media platform has seen early investors pull out after discovering that the former president was attached to "Digital World, a special purpose acquisition company, or SPAC, formed for the purpose of acquiring another company," the HuffPost reported.

The American Civil Liberties Union of Texas is suing a Houston-area school district over a dress code policy it says has led to multiple students being disciplined for having long hair.

Plaintiffs in the lawsuit include six boys and a nonbinary student ages 7-17 from Magnolia Independent School District. According to the lawsuit, which was filed in federal district court Thursday morning, the Magnolia ISD gender-based policy "imposed immense and irreparable harm" on the students, some of whom claim they have worn long hair for years while attending school in the district without any repercussions.