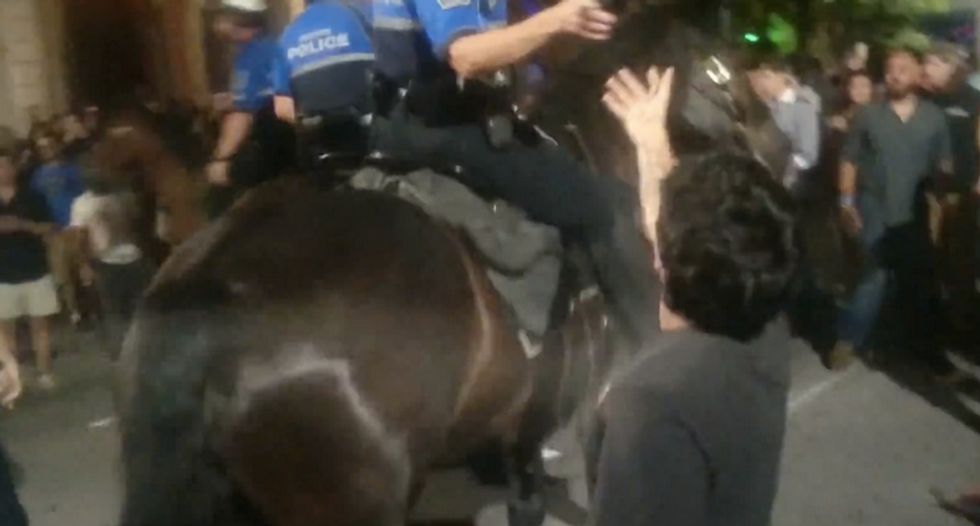 Around last call on Saturday night in Austin, Texas, a tourist from Los Angeles taped several white police officers tackling a black man in the middle of a busy street, confiscating the phone of a filming bystander, and then pepper spraying the man who'd been taping in the face.

Jericho Tucker, a "video game player and online entertainer" was in Austin this weekend for the X Games, the Austin American-Statesman reports. Tucker and friends were walking along the city's famously boozy 6th Street close to 1:30 AM on Sunday, when the group observed what appeared to be a team of white cops pinning a black man to the ground, handcuffing him, and taking him away. Tucker caught the confrontation on his camera phone, as well as footage of a police officer taking away a filming device from someone in the crowd, and then aiming burning liquid in his direction.

Tucker's video shows officers picking a black man -- who remains silent throughout the filming and whose crime is unclear -- off the ground, and escort him in handcuffs away from a gathering mass of onlookers. Some police are on horseback, and use the horses' bodies to push back the crowd from the street onto the sidewalk. "Hey, watch the fuck where you going with your fucking horses," someone can he heard saying in Tucker's video.

And then, a cop smacks a camera phone from a man's hand, and pepper sprays him in full view of Tucker's lens.

"Austin police confirmed Sunday that they are looking into an incident," the Austin-American Statesman reports. "The Police Department “is aware of this incident and is conducting a review to determine if the officers’ conduct is compliant with our policy."

Shortly after Tucker recorded what he perceived as an incidence of police brutality, he took to Twitter to describe the event -- and later uploaded his video. What follows are a few of Tucker's tweets from Sunday:

Watch the initial attack and the pepper-spraying of the photographer below: