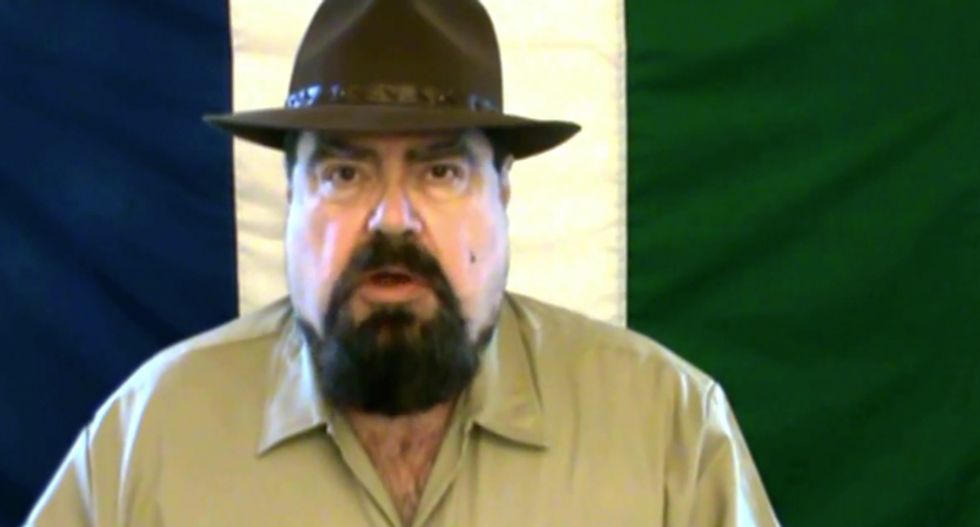 Dylann Roof refers to Harold Covington’s white separatist group, the Northwest Front, in his alleged manifesto. The rightwing sci-fi writer distances himself from the shooting, but his followers speculate if his work influenced Roof’s actions

One of the shadowy figures who appears to have influenced alleged Charleston killer Dylann Roof is Harold Covington, the founder of a white separatist movement and, within supremacist circles, an influential sci-fi author. Covington, the latest in a long line of rightwing sci-fi writers, has been linked to racist crimes in the past and this week called the massacre “a preview of coming attractions”.

The racist manifesto and photos apparently posted by Roof makes mention of the Northwest Front, created by Covington, a former member of the American Nazi party who traveled to South Africa and Rhodesia in order to agitate for white power. In the accompanying photos, Roof wore patches with Rhodesian and apartheid-era South African flags on them.

Covington, if you believe his website, runs a growing enclave of white supremacists near Seattle called the Northwest Front. The non-profit group is reflected in a series of sci-fi novels, authored by Covington, about a dystopian future in which a white nation is the only answer to US economic and racial woes.

American science fiction has long had a rightward tilt, from the contemporary strain of small-press sci-fi Tea Party fantasias swarming the Hugo Awards nominations all the way back to libertarian deity Ayn Rand. But Covington’s novels are a breed apart.

His followers see conspiracy in Covington’s connections to Roof. “And why did this young man have a flight jacket with flag patches from the old White ruled southern African countries, which is where HAC spent part of his early days in the Cause, hmmm,” wrote a commenter called Wingnut under a recent podcast on the Northwest website. “Wonder if they’ll ‘find’ a pile of NF-HAC stuff in this young man’s home? Then they can pull one of those ‘the devil made me do it’ numbers on HAC.”

Covington doesn’t advocate for randomized violence; he wants revolution, to the extent that he calls his followers “comrades” and lectures them on “the purpose of revolution” among other phrases more characteristic of the left than the right. While it was clear Roof knew about the Northwest Front and seemed familiar with it, Covington condemned Roof’s shooting on his Tuesday podcast because “it doesn’t work.”

“People, don’t do this shit, this flipping out with a gun lunacy,” he said. “No, this is not just ritual disclaimer, Harold trying to cover is ass, this is what Harold really thinks.”

The Roof killings are not the first time Covington’s name has come up in connection with an allegedly racist murder. Covington was part of a group of white supremacists in the 1970s who massacred black people at a rally in Greensboro (Covington didn’t kill anyone and wasn’t in attendance on the day of the violence). He was also at one time close with Frazier Glenn Miller , who is charged with killing a one woman, a 69-year-old Jewish man and that man’s 14-year-old grandson in front of their temple last year.

Elizabeth Wheaton wrote about Covington in her book Codename Greenkil: The 1979 Greensboro Killings. “Covington was pretty much a minor player,” she told The Guardian. “He liked the Nazi image on the white power kinds of things, but he was kind of nerdy. Most of [the others] were country people or ex-military.”

“For all of his lacks, he does not lack the ability to turn a phrase,” said Wheaton. “He’s very articulate in presenting his message.”

Covington said he’d never heard of Roof before the massacre and told The Guardian to “try Stormfront. That’s usually where newbies in the Movement end up leaving their first electronic footprint.”

Much of Covington’s influence on his followers comes from his novels, which are written in a style that reads like someone spilled a 50-gallon barrel of ethnic slurs all over a stack of early-draft Robert Heinlein novels. His choice of cultural icons dates his books considerably, even the recent ones, which are filled with up-to-the-minute references to Jane Fonda and Gilligan’s Island, but the author probably doesn’t care about these criticisms. The books are not primarily novels, anyway.

The Northwest novels “are not meant to be mere entertainment”, according to Covington’s website Northwest.org. “They are meant to be self-fulfilling prophecies. The author wishes to inspire the creation of a real Northwest American Republic, and his novels are filled with a great deal of sound practical advice about how to do it.”

There are five Northwest novels are all populated with similarly brave and heroic white men (“domestic terrorist-type dudes” in the words of Shane Ryan, the narrator of Covington’s A Distant Thunder), cruel, DW Griffith-style black people whose speech is written in dialect, and hand-wringing liberals who want nothing more than to stifle the right to free speech of (white) people who just want to secede from the US.

“As the NVA [Northwest Volunteer Army, Covington’s heroes] vise had slowly clamped down on the Northwest over the past five years, Capitol Hill had lost much of its left-wing cachet, as those artsy-fartsy habitués who were dusky of skin or sexually inverted either fled to more hospitable climes or got well and truly wasted, shot dead on the pavement by the NVA gunners,” Covington explains in 2004’s A Mighty Fortress.

Shane Ryan, hero of the purported oral-history-of-the-revolution volume A Distant Thunder, recalls the heroism of his white brothers and sisters up to and including teams “specialty snipers” who pick off interracial couples and, of course, Conrad Baumgarten, who “came all the way from Germany with his SS officer grandfather’s scoped ’98 Mauser to hunt Jews”.

The conservative ‘fringe’ in science fiction

Covington comes from a long line of rightwing US fantasists, though most are far less extreme. Where film and literary fiction and visual art tend to trend left, American sci-fi has a definite rightward bent, from libertarian deity Heinlein (widely praised by both his ideological detractors and his fans) to Ayn Rand, Orson Scott Card and beyond.

“Science fiction has always had a strain in it that has been conservative and libertarian and some combination of the two; that’s been kind of a prominent feature for a very long time,” said John Scalzi, president of the Science Fiction & Fantasy Writers of America. “That in itself isn’t particularly problematic. Some of the most iconic writers in science fiction and fantasy have been conservative to libertarian. There’s nothing inherently wrong with them or the stories they tell. But like any group of people there are going to be folks whose politics are fairly fringe, and whatever comes out of their fringe is going to be fringe as well.”

Scalzi is currently the target of one of those fringe figures, the openly misogynist and racist sci-fi writer Vox Day whose logrolling campaign to include more white men and fewer women and minorities in the Hugo Awards has attracted ire across the political spectrum and from the current king of fantasy, George RR Martin.

There are also less fringey figures whose work has taken a sharp rightward turn. Dan Simmons, writer of the much-praised Hyperion Cantos, wrote a novel called Flashback that more or less explicitly blamed progressives for the coming collapse of civilization and featured an “Islamic caliphate” that swarmed across Europe. Tea Party politics infect the work of Simmons’ contemporary, Orson Scott Card, as well: Card’s 2009 novel Empire imagines a world in which a radical leftist army calling itself the Progressive Restoration takes over New York City and ignites a second civil war.

Scalzi said that it’s unwise to dismiss authors because of a single novel or late-career tendency toward the lunatic fringe, but that he’s seen a rightward shift in a baby-boomer sci-fi novelists in particular. “For some healthy slice of the baby boomers in general, 9/11 just caused a bend in their thinking and they’ve been thinking in a much more conservative and reactionary way,” he said.

In an email exchange with the Guardian, Covington said he was urging followers not to talk about Roof until “all the facts were out”.

What did he mean by that? “I mean that a lot of times these things are not as advertised and people like you have a tendency to try to use us as props and aids to support the Official Version. Oklahoma City being a prime example; there is a compelling case to be made that was a government sting operation gone very wrong, but I long ago gave up any hope of ever getting anybody to listen; anything we say is simply shouted down or kicked aside, we are treated as cranks at best, and facts are never allowed to interfere with the Received Wisdom from on high.

“For another example, I am well aware of the ideological orientation of the Guardian (I lived in the British Isles for a number of years [Covington spent time among skinheads in the UK – “a lot of them were great guys,” he said on a recent podcast]) and I understand that I have not a snowball’s chance in hell of getting our viewpoint represented honestly and fairly there.”

A few hours later, a new installment of his radio show went up on the Radio Free Northwest website, in which he did not advocate for violence, but did fantasize for a little while, saying that liberals were afraid of Charleston because it was “a preview of coming attractions”.

“They’ve been given a vision of a time in some imagined but possibly not too-far distant future when all of a sudden, on the street or in their office, or in some trendy fern bar, or Starbucks, or wine-and-cheese boutique on the Upper East Side or in San Francisco, they will look up, possibly from the laptop, where they are typing up their day’s quota of leftwing, liberal horseshit, and they will see a young white man like Dylann Roof standing in front of them with no steroid-pumped policemen in blue to protect their liberal candy asses from the consequences of years of their own behavior,” he said. “They will see in that young white man’s eyes, that he recognizes them. That he is now beyond deception or bullying or browbeating or Twitter-shaming or intimidation, that he knows them for what they are. And they will look down and see that he has something in his hand.”