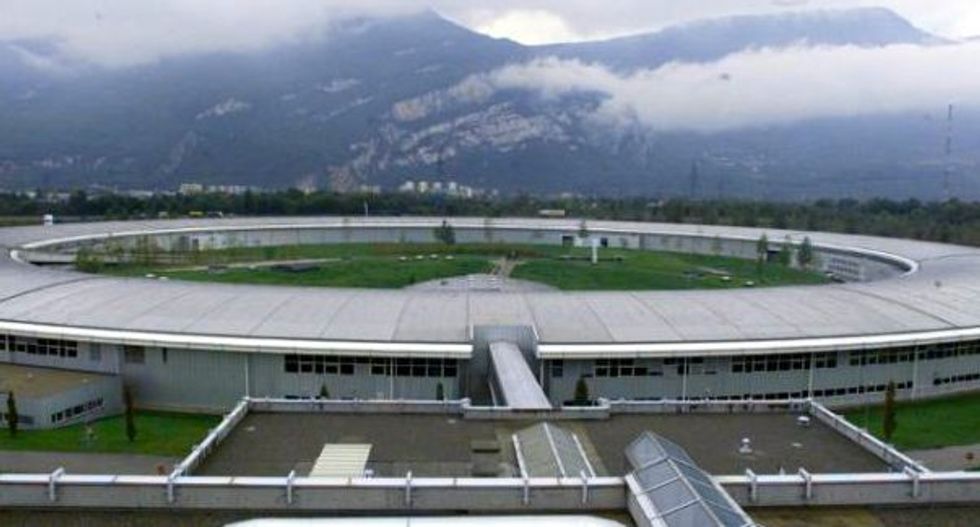 The eggs, roughly the size of a one-euro coin or sparrow egg, are about 125 million years old, and were discovered in Thailand in 2003.

They have hard shells, unusual for lizards, and initial examinations concluded they must have been laid by a small carnivorous dinosaur or early type of bird.

Not satisfied, an international team of scientists decided to look inside the fossil eggs using the powerful European Synchrotron Radiation Facility (ESRF) in Grenoble, France.

High-resolution, ultra-bright X-rays allowed them to observe the finest details of the minute bones inside the six knob-covered shells, and recreate the skeletons in 3D.

They found features of a "hitherto unknown lizard", including a long and slender skull ending in a pointed snout, and a "quadrate" -- a jaw articulation bone found in the lizard family.

"These embryos were neither dinosaurs, nor birds, but lizards from a group called anguimorph," the ESRF said in a statement.

The group includes komodo dragons and mosasaurs, a type of extinct marine reptile.

"The discovery of anguimorphs in hard-shelled eggs comes as a considerable surprise," said the statement -- and recast the evolution of lizard reproduction.

"So far, only geckos were known to lay hard-shell eggs."

The study was published in the journal PLOS ONE.

In a letter to Arizona State Senate President Karen Fann on Monday, Arizona Attorney General Mark Brnovich put to bed yet another conspiracy theory from Trump supporters alleging voter fraud in the state, according to local reporter Garrett Archer.

The claim in question, promoted by the security firm, Cyber Ninjas, that conducted a controversial partisan audit into Maricopa County's elections, was that ballots had been cast fraudulently in the name of dead voters — something that Brnovich's Election Integrity Unit investigated and found meritless.

Experts are weighing in on Monday evening's historic news that under the direction of President Joe Biden Americans have killed the top leader of al-Qaeda, the top terrorist who succeeded Osama bin Laden and was a top architect of the 9/11 terror attacks.

"A CIA drone strike has killed al-Qaida leader Ayman al-Zawahri in Afghanistan, according to five people familiar with the matter," the Associated Press reports. "Current and former officials began hearing Sunday afternoon that al-Zawahri had been killed in a drone strike, but the administration delayed releasing the information until his death could be confirmed, according to one person, who spoke on the condition of anonymity to discuss the matter."

Trump welcomed Cassidy Hutchinson on his post-presidency team despite claims he didn't: report

Business Insider has obtained documents that they say show Cassidy Hutchinson was working with former President Donald Trump even after he left office.

Trump and his allies have set their sights on attacking Hutchinson after she testified to the House Select Committee investigating the Jan. 6 attack and the effort to overthrow the 2020 election. Hutchinson was previously working with a lawyer paid for by Trump's political action committee, but several months ago, it was revealed she switched to her own counsel. It turned commentators to suspect it meant she was walking away from Trump World to cooperate with the committee. Up until that point, she had been quietly on the team.