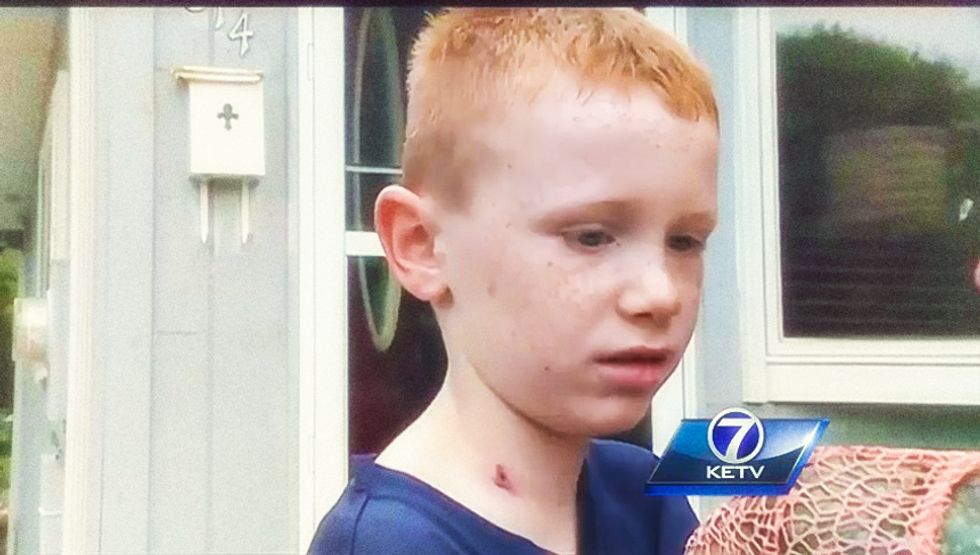 Leyton Riddle was shot during a fireworks celebration (KETV)

A 7-year-old Nebraska boy was recovering after being hit with a bullet that police believe was fired as part of a Fourth of July celebration.

Jim Riddle told the Omaha World-Herald that he was surprised on Saturday when his grandson, Leyton, did not come back out of the house to watch the rest of the neighborhood fireworks show. Then he heard his wife screaming.

Jim Riddle found Leyton inside the house, bleeding from the right shoulder. And then they noticed a bullet on the floor.

“I said ‘That can’t be a bullet,’” Jim Riddle recalled. “But there it was — a shiny brass bullet.”

"The saddest part of everything is he asked me if he was going to go to heaven, and that is what pretty much did it for me," Leyton's mother, Trish, told KETV.

A spokesperson for the Council Bluffs Police Department told the Omaha World-Herald that someone celebrating the holiday as far as five miles away was thought to have fired the .223-caliber round.

Leyton was treated at Mercy Hospital and released. Jim Riddle said that the boy would have a scar, but he was expected to recover.

“He was more scared than hurt,” Jim Riddle explained.

“Hopefully the person who did this will find out and realize ‘Boy, I can’t do that anymore, because I could really hurt somebody — especially a kid,’” he added. Even if there’s nobody arrested, I at least hope for that.”