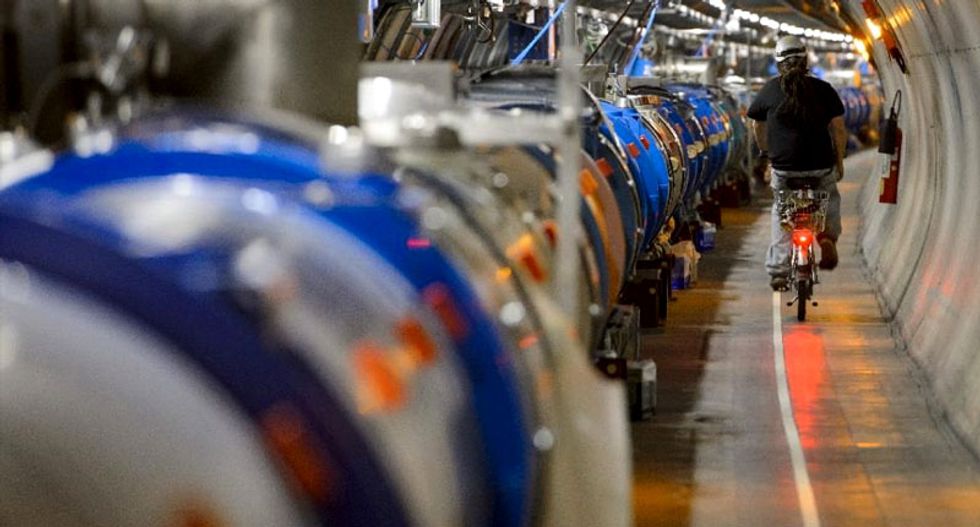 Data from the Large Hadron Collider (LHC) outside Geneva appears to have proved the existence of particles made of five quarks, solving a 50-year-old puzzle about the building blocks of matter, scientists said on Tuesday.

Quarks are the tiny ingredients of sub-atomic particles such as protons and neutrons, which are made of three quarks. The less common and more unstable mesons, particles found in cosmic rays, have four.

A five-quark version, or "pentaquark," has been sought, but never found, ever since Murray Gell-Mann and George Zweig theorized the existence of such sub-atomic particles in 1964.

Guy Wilkinson, spokesman for the LHCb experiment based at CERN, the physics research center that houses the LHC, said a telltale "bump" seen in a graph of billions of particle collisions could only be explained by a five-quark particle.

"From the point of view of our experiment, we think it has fulfilled all criteria of discovery. We have no other way of explaining what we have seen. But the scientific method is such that we have submitted a paper to a journal, the journal will consider it, then the community will judge," he told Reuters.

The LHC, a circular 27 km (17 mile) underground particle accelerator, has provided reams of data since it started smashing protons together at close to the speed of light in 2010.

Analysis of the collisions has already proved the existence of the Higgs boson, a particle that gives mass to matter, and scientists are now looking for a "dark universe" that they believe exists beyond the visible one.

The pentaquark discovery has opened even more new avenues.

"What we want to do now is to look for other five-quark particles and try and understand more about their nature, and this may tell us something about how even the matter inside our bodies is bound together," Wilkinson said. "It may also have cosmic consequences for ... understanding what happens to stars at the end of their life."

He said it was still a mystery why it had taken 50 years to find pentaquarks.

"There must be many, many pentaquarks out there. In fact in our analysis we found two. One is very evident, the other is a little harder to see. There should be many out there."