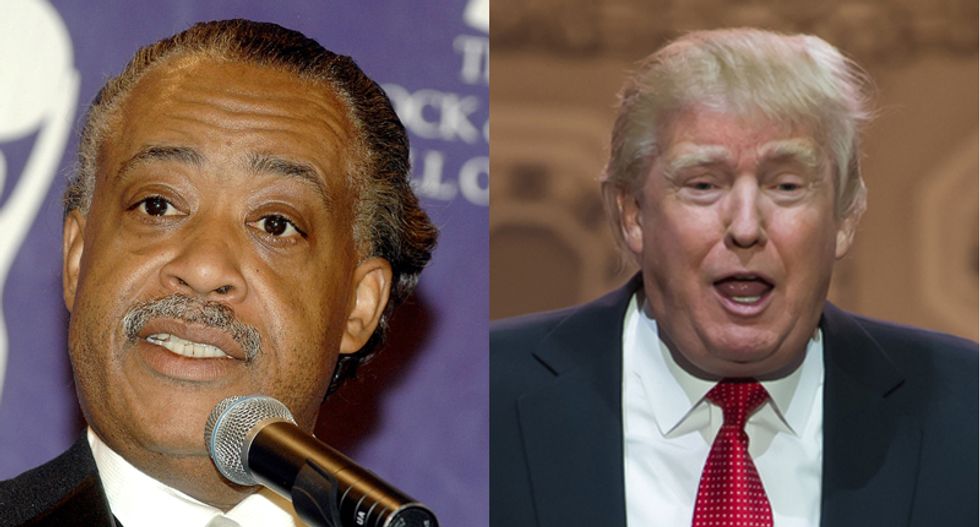 In the piece -- published Tuesday under the headline "What Al Sharpton learned from James Brown that Donald Trump hasn’t" -- Sharpton said of the former real estate baron, "What plays at Lincoln Center don’t play at the Apollo. And I think that he is an Apollo act in Lincoln Center.”

Capehart figured there was no better person to ask about Trump and this bizarre, how-else-can-I-offend-you approach he has taken from the outset of his 2016 campaign.

"Sharpton and Trump are both New Yorkers who have known each other and done battle with each other for years. And they are both targets of and survivors of the Big Apple tabloids that make sport of high-flying folks like them," Capehart said. "That’s why Sharpton’s assessment of Trump’s campaign and its future is as vivid as it is correct."

“When you run for president, in my opinion, you run either to win or you run to further a cause,” Sharpton said. To his thinking, both former Secretary of State Hillary Clinton and ex-Florida Gov. Jeb Bush are both running to win.

Sharpton said that when he ran in 2004 in the Democratic primary, it was to further a cause, to draw attention to issues which "we wanted to raise like criminal justice and all," issues that "were not going to be in the center stage if we didn’t have a candidate.”

He went on to say the following:

Donald Trump is not running to win or [for] a cause. HE was the cause that furthered the branding and popularity of him and his businesses. So when you have somebody that does not have to, in any way, monitor or tailor what he’s doing based on gauging a win or gauging does it hurt a cause, you end up with anything goes. And anything goes has worked for him because he’s been basically a business slash celebrity slash cultural figure. What he does not understand is that does not apply in the political mainstream.

What plays at Lincoln Center don’t play at the Apollo. And I think that he is an Apollo act in Lincoln Center. I think that what worked in his tabloid, playing the New York celebrity thing does not work when you’re on a serious thing.

First time, I went to Vegas … [James Brown] took me there. And [he] said to me, “Reverend, let me tell you something. … There’s a difference between the lounge act and the acts that play the main room.” We’re at Caesar’s Palace. I’m about 19 – 20 years old.

And I said, “What do you mean?” And he said, “When you’re in the lounge, you’re competing with the bars and the barmaids and the slot machines and people gambling. So you do whatever you can to get attention. But when you’re in the main room, they paid to see a show. You’ve got to be ready. You gotta have choreography. You gotta be rehearsed. You gotta have polish.” He says, “When you get on the main stage, Reverend, whatever you did to get out the lounge don’t do that on the main stage.”

He went on, "Donald Trump never made that [transition]. So in the assessment of that, why not take a shot at McCain? He’s ad-libbin’, freelancin’, lounge-talking anyway. And he doesn’t understand you are now on center stage. You can’t talk about McCain like you’re talking about the real estate guy bidding against you for a building in downtown Brooklyn.