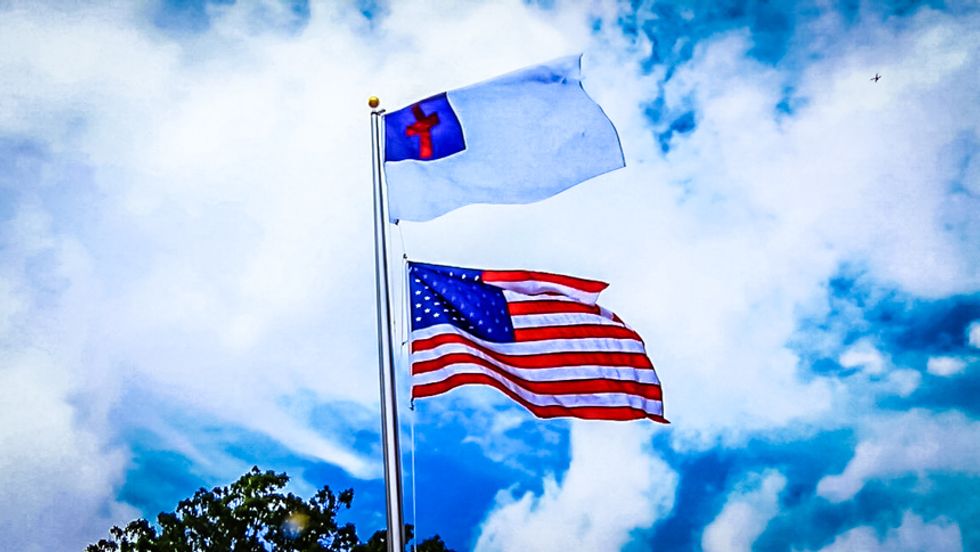 A North Carolina pastor is calling on churches across the United States to install flag poles so that they can fly the Christian flag above the American flag to protest same-sex marriage.

In a video posted to YouTube last week, Pastor Rit Varriale of Elizabeth Baptist Church in Shelby explained that his church had installed a flag pole so it could hold a "special ceremony" to raise the Christian flag above the American flag.

That ceremony took place on Sunday.

"We hope congregations all across the U.S. will join us on this," Varriale said. "And prayerfully it will sweep across our country as a message to congregations to reevaluate our priorities. We serve God first."

"If you already have a flag pole at your campus, go ahead and flip that order around. Start putting the Christian flag above the American flag," the pastor recommended. "If you don't have a flagpole -- we didn't have a flagpole -- get one, put those flags up there, and demonstrate to everybody that drives by you're a congregation that's committed to God first."

"We should be flying the Christian flag above the American flag" as a demonstration that Christians will respect and obey the federal government up to the point that the government asks something that is inconsistent with what God has called His people to do," he opined.

Varriale pointed to LGBT rights as proof that things in the country were "going wrong."

"In large part we started going wrong when we stopped standing up for things that are inherently part of the Christian life, like prayer," he lamented. "The admonition from the government to stop praying in the public school system was packaged under the notion of rights -- the rights of the individual."

"Now, stepping back and looking at the issue of prayer in school from a biblical perspective, the church made an incredible mistake by listening to and appeasing the government and refusing to pray with our children," Varriale added. "Now we are reaping what we have sown by not standing up for the things we believe in."

In the future, Varriale said that he hoped to see Christians practicing the same kind of civil disobedience that had made the LGBT movement successful.

"That is the level of commitment they have, and that's why they are winning. The church is going to have to be as committed to the lordship of Jesus Christ as the LGBT community has been committed to their agenda," he insisted.