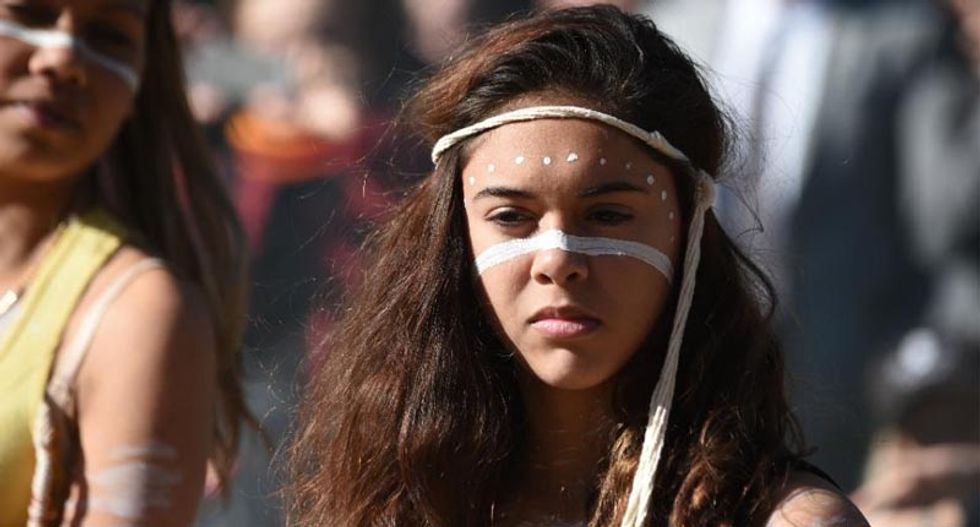 Support for the movement to recognise Australia's indigenous people in the constitution is high, with one national poll published in The Sydney Morning Herald putting it at a record 85 percent (AFP Photo/Peter Parks)

Australia moved closer to recognising Aboriginal people in its constitution Monday after talks with indigenous leaders, Prime Minister Tony Abbott said as he urged an end to the "echoing silence" in the founding document.

Written more than a century ago, Australia's constitution fails to mention Aboriginal or Torres Strait Islander people and a campaign has been underway for several years to "recognise" the continent's first inhabitants via a referendum.

"I am confident that the time is right to move down this path," Abbott said after unprecedented bipartisan talks in Sydney with some 40 indigenous leaders and Labor opposition leader Bill Shorten.

"I think that there is an abundance of good will. I think we are good enough, big enough and brave enough to do this, but it is important that we get it right."

Abbott praised Australia with its indigenous heritage, British foundation, and multicultural character but said: "What we now need to do is to end that echoing silence in our constitution... the omission of indigenous people."

Debate on the content of the changes has already begun, and Abbott said he was ruling nothing in or out, but that both he and Shorten were committed to holding a recognition referendum.

"Based on today's discussions, we consider that the referendum could not be held before the next term of parliament and should be outside the politics of the election cycle," they said in a joint statement.

"We agree the referendum should be held when there is the best possible chance of success."

Both politicians also agreed to a broad national conversation on the issue, and proposed a series of community conferences across the country starting as soon as September.

They also plan a referendum council broadly reflective of the Australian people to consider the referendum question, timing and constitutional issues.

No timeframe was settled but Abbott said he was hopeful the question's wording could be framed by mid-2016 with a referendum held as early as 2017.

"I would be very disappointed, I would feel that we have not lived up to our high expectations and we haven't quite been our best selves if we weren't able to do this in the next term of parliament," he said.

Support for the "recognise" movement is high, with a Fairfax Ipsos national poll in The Sydney Morning Herald Monday putting it at a record 85 percent. Eleven percent were opposed.

Australian lawmakers formally recognised indigenous people as the country's first inhabitants in 2013, but there has been debate about how the constitution should be changed.

"We believe that this process must bring about substantial recognition, we don't believe that symbolic change is enough," she told reporters after the talks.

Abbott has prioritised improving the lives of indigenous Australians, who have significantly lower life expectancies than others in the country, with many living in remote and poor communities.

He said he would spend a week running the country in August from an indigenous area, in the Torres Strait Islands and Northern Peninsula in the far north of the country, following a similar scheme last year.

But he acknowledged in the joint statement that constitutional recognition could not address all the issues indigenous people face and this would remain a task for the government of the day.

"However constitutional recognition provides a chance for our generation to right an old wrong," they said.

Aborigines are believed to have numbered around one million at the time of British settlement in 1788, but there are now just 470,000 out of a total population of 23 million.