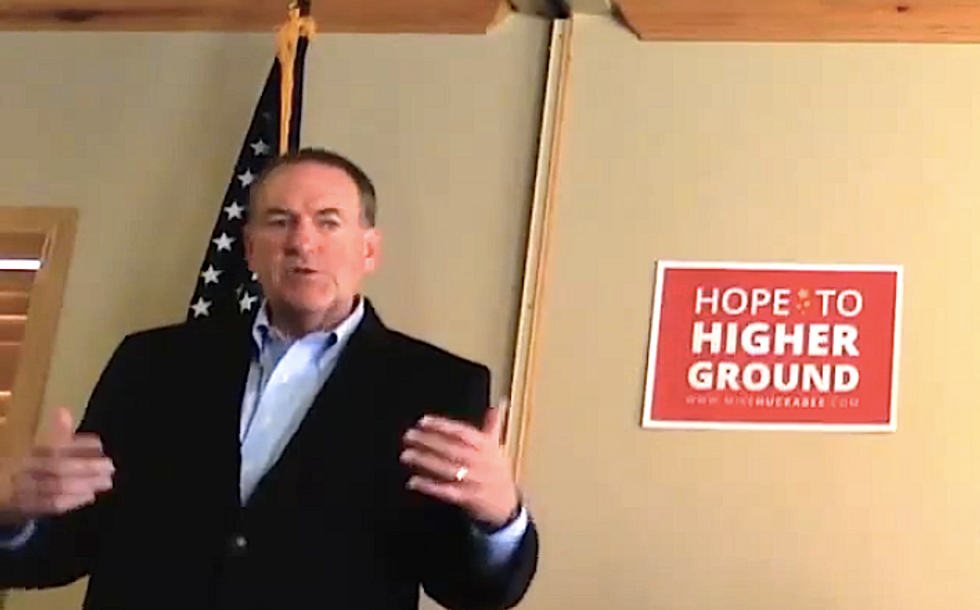 In the video embedded below, a man who identifies himself as Rod Webber raised his hand to ask a question of the erstwhile Fox News contributor and current 2016 Republican presidential hopeful.

"I'm not really a political person," Webber said, "but I have a bet with a friend. You're a religious person, a Christian?"

"Absolutely, I'm a believer," Huckabee, who is a former evangelical pastor, replied.

Webber quoted the Bible's Book of Proverbs, which says, "Whoever has a bountiful eye will be blessed, for he shares his bread with the poor."

He then quoted the Bible's final book, the Book of Revelations, saying that God commanded the righteous to "destroy those who destroy the Earth."

And finally, from the Book of Matthew, Jesus said, "You shall not kill; and whoever shall kill will be in danger of judgment."

Huckabee said that individuals should take it upon themselves to help the poor instead of "pawning that off on the government."

Webber reminded Huckabee that he is breaking Biblical law by shaving, quoting the Book of Leviticus: "You shall not round off the hair on your temples or mar the edges of your beard."

"There's more passages about shaving being a sin than there is about homosexuality," Webber said.

Watch video of the encounter, embedded below: