Bernie Sanders: America has ‘got to apologize for slavery’ 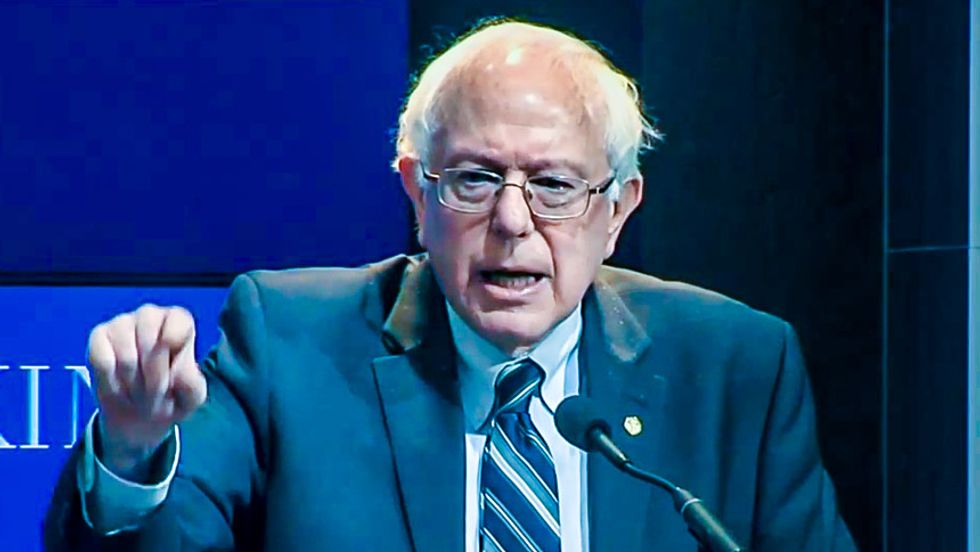 Senator Bernie Sanders (I-VT) says the United States, as a nation, should apologize for slavery. But the presidential candidate will not answer a direct question about whether he'd apologize himself if elected to office.

On the Joe Madison show Wednesday, the host -- who is black and also goes by "The Black Eagle" -- asks the white politician how he feels about a U.S. president apologizing for the country's centuries-long enslavement of black people.

"Well, slavery is, you know," Sanders begins, "obviously nobody in this generation, you know, is involved in slavery, but as a nation, uh, slavery is one of the abominations that our country, uh, has experienced. There's no excuse."

"What can we say about it?," Sanders asks aloud, before answering himself. "It was horrific," the Vermonter says of slavery. "It killed millions of people."

"It destroyed just the lives of so many people," Sanders continues. "So as a nation -- I don't think as a president -- but as a nation we have got to apologize for slavery."

"So is that a yes or a no?," Madison inquires of the would-be U.S. president.

"Well it's, I mean, I'm not exactly sure what it means," Sanders replies. "As a nation, we have got to apologize for slavery and of course the president is the leader of the nation."

Madison points out the Sanders one day may become the president, and that Bill Clinton didn't apologize for slavery while he was in office, even though civil rights activists wanted him to.

"It's important that we come together, you know," Sanders remarks, transitioning the conversation away from the topic of slavery. "What's happening in South Carolina now. Getting rid of the Confederate flag is a signal I think, a sign, that we have to understand what that flag represents."

According to Sanders, the Confederate flag represents racism.

"It's a good thing that it is going down," says Sanders.

The aspiring leader of the nation says, however, that we need look not just to the past, but also to the future.

"We've got to apologize today," Sanders says forcefully. "For so many young people not being able to afford to make it into the middle class."

Many people, particularly people from low-income families, aren't able to pay for college, Sanders explains. Which is why he supports the policy of making public colleges and universities free.

Madison and Sanders move on to talk about balancing the federal budget.

Slavery in the United States officially ended when President Abraham Lincoln signed the Emancipation Proclamation in 1863. With landowners in continued want of free labor, however, a post-slavery system of convict leasing developed. Essentially, law enforcement officers would detain black people on spurious charges, and then rent them out to the likes of coal mine bosses. The police kept the cash, and profited handsomely, and black people continued to supply free labor in the United States.

The United States formally prohibited the practice of convict leasing in response to unflattering propaganda campaigns by the Axis powers in the early years of World War II. Meanwhile, Jim Crow laws enforced race-based segregation in the United States, and white supremacist hate groups terrorized and lynched black Americans into the 1960s.

During the civil rights era, black Americans marched in the streets and sometimes died for the right to attend public school or vote in elections. Meanwhile, the War on Drugs began in earnest, putting a new generation of black men behind bars for recently-invented crimes.

Often stripped of their voting rights after serving out their sentences, black Americans have become disenfranchised at an alarming rate.

According to scholar Michelle Alexander, author of The New Jim Crow, there are currently more black American men behind bars in the United States than there were enslaved in 1850.