Bill O'Reilly freaks out: #BlackLivesMatter 'wants to tear down the country' 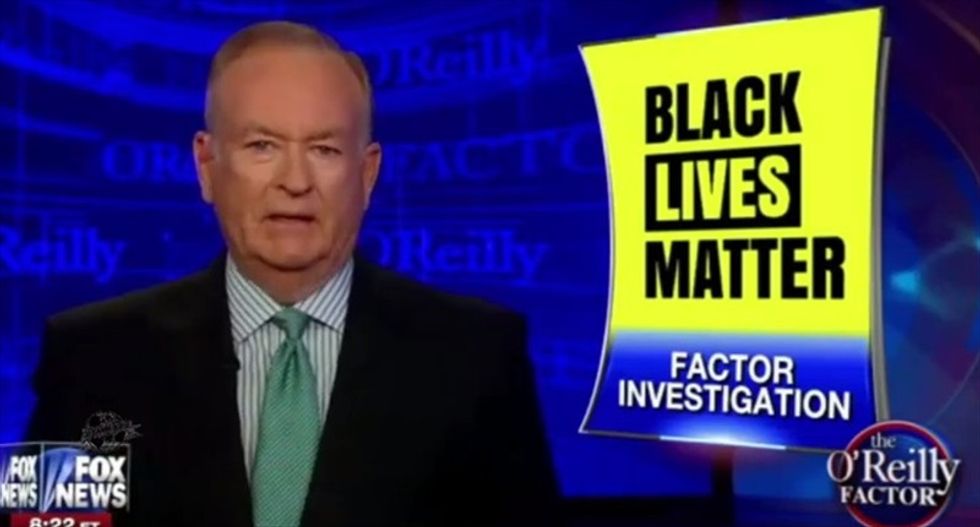 Fox News host Bill O'Reilly accused Black Lives Matter organizers again on Tuesday of being more political operatives than demonstrators, while also scoffing at Jay-Z and Beyoncé for donating money to groups affiliated with the movement.

"Do you think they know that [they are] giving money to an anarchistic group like this that wants to tear down the country and is talking about genocide, and really really extreme things," O'Reilly told Washington Times reporter Kelly Riddell. "You think they have any idea what they're doing?"

As he did last December, O'Reilly accused the demonstrations of being orchestrated by "agitators," noting a remark by co-founder Patrisse Cullors over the weekend that they would stage protests at next year's Republican National Convention in Cleveland.

"I don't know whether this crew, Black Lives Matter, have any constituency other than the radical left, the real fringe nuts that run around the country saying crazy things," O'Reilly said.

Riddell told the host that the demonstrators should be taken seriously in the wake of their protest during the Netroots Nation conference earlier this month, which prompted an apology from Democratic presidential candidate Martin O'Malley for using the phrase "all lives matter" -- typically seen as a way to downplay police violence against black Americans.

"He didn't have to issue an apology," O'Reilly said of the former Maryland governor. "He chose to. But that's O'Malley's fault for even going to the Netroots convention."

"I mean, Hillary Clinton has been there before," she replied. "A lot of liberal activists go to this on a yearly basis."

Riddell also referred back to her report this past January stating that groups affiliated with the movement had received donations either directly from progressive billionaire George Soros' Open Sources Foundation, or affiliated groups.

According to her, a number of organizations under the #BlackLivesMatter "umbrella" benefitted from the funding, and followed narratives set out by "think tanks."

"They believe fundamentally that it's social policy and 'The Man' and the professional political class that is out to get them with unjust policies," she said. "That basically all of their social woes, all their economic woes can be based on unfair policies."

Watch the segment, as posted online on Tuesday, below.