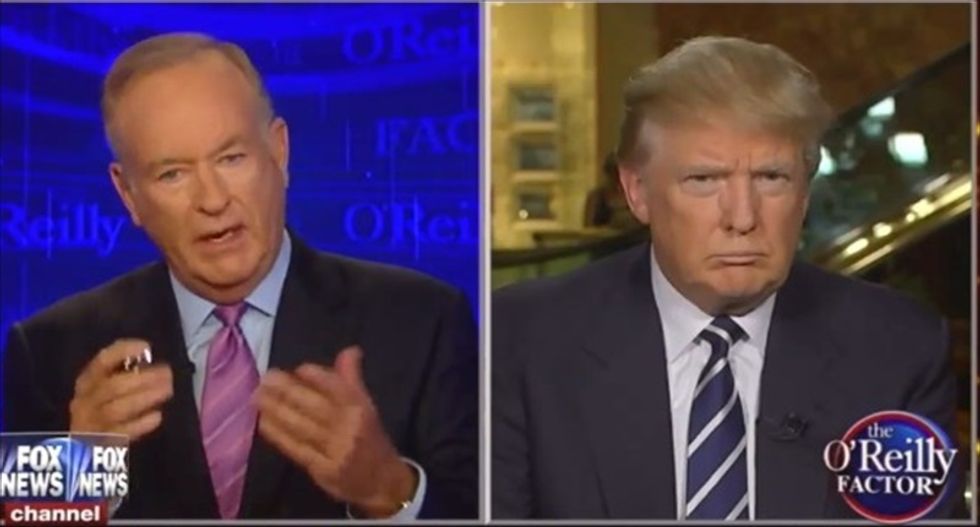 Fox News host Bill O'Reilly pushed back against Donald Trump for his criticism of Arizona Sen. John McCain on Monday, saying that McCain should not be made into a "whipping boy" for veteran-related issues.

"You picked the wrong guy here, I think," O'Reilly told him, citing legislation McCain has worked on during his tenure chairing the Senate Veterans' Affair Committee.

"Regardless of work or not work, they're suffering," Trump replied. "I see them all the time."

"You're right, they're suffering," O'Reilly said. "But McCain shouldn't be the whipping boy."

"But he's virtually the head person in Washington," Trump insisted. "Somebody's doing a bad job. It's massive corruption, massive incompetence, and the people are really being treated like third-class citizens. Who's in charge?"

Trump has been criticized by several conservatives since disparaging McCain last week, saying, "He's a war hero 'cause he was captured. I like people that weren't captured."

On Monday, Trump walked the remark back, telling the Factor host that he did think McCain was a war hero, and that he said the same thing four times following his initial remark, citing former CBS News correspondent Sharyl Attkisson.

For his part, O'Reilly insisted that Trump knew that McCain was a war hero, and asked him to say something "man-to-man" to the former presidential candidate.

"I have respect for Senator McCain," Trump said. "I used to like him a lot. I supported him. I raised a lot of money for his campaign against President Obama. And certainly, if there was a misunderstanding, I would totally take that back."

At the same time, he also blamed McCain for instigating the dispute by disparaging his supporters.

"We had 15,000 incredible Americans talking about [an] illegal immigration bill, and he called them 'crazies.' That was a very insulting thing," Trump told O'reilly. "They were all very insulted in Phoenix the other day, and I also see what's happening, 'cause I'm making the rounds all over the country and I see how badly veterans are being treated, and he's the guy. He's supposed to be doing it, and see him on television all the time; he's always talking, talking, but nothing gets done."

"You could have made the point that Mr. McCain's characterization of your supporters as 'crazies' was false, and then you could have just said what you said right now," O'Reilly responded.

Watch the interview, as aired on Fox News on Monday, below.