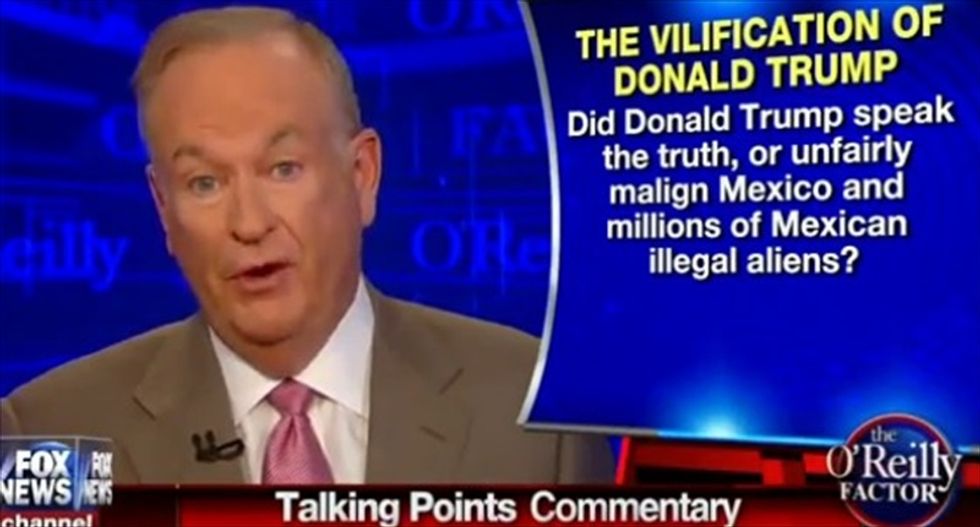 Fox News host Bill O'Reilly seized on a fatal shooting in San Francisco to argue on Monday that Donald Trump's real problem on immigration is that he spoke too generally.

"Here's the deal. Here's the deal," O'Reilly said. "The mayor and city supervisors of San Francisco are directly responsible for the murder of Kate Steinle, and the Obama administration is complicit."

Steinle was shot and killed last week while walking along Pier 14 in the city with her father. The suspect, 45-year-old Francisco Sanchez, has not contested the accusation, saying that he was high on sleeping pills and marijuana on the night in question, but did not recall shooting a person.

O'Reilly noted that Sanchez had been deported on five previous occasions but returned to San Francisco because it is a "sanctuary city," meaning it will not cooperate with federal authorities on immigration matters. Attorney General Loretta Lynch, the host argued, would be within her rights to arrest Mayor Lee and city officials, but will not because "racial politics" are put at the forefront.

"Which is why Trump caught so much hell," O'Reilly said. "The Constitution demands that the federal government protect Americans from foreign intruders -- demands it. Obviously, that responsibility's not being met. And if you point that out, as Trump did, you're a racist. A piñata for the open-border crowd to bash. The fact that a felon could be deprted five times and still be walking around San Francisco should shame Congress."

Trump, O'Reilly said, was right to say that a "massive wall" would curtail what he called the "chaos" regarding immigration and crimes connected to it. The Factor host said that the terrorist group Islamic State "has nothing" on the cartels who run rampant in cities along the border between the US and Mexico.

Watch O'Reilly's commentary, as aired on Monday, below.