Black people are not 'equal’: This is how the League of the South recruits a new generation on the web 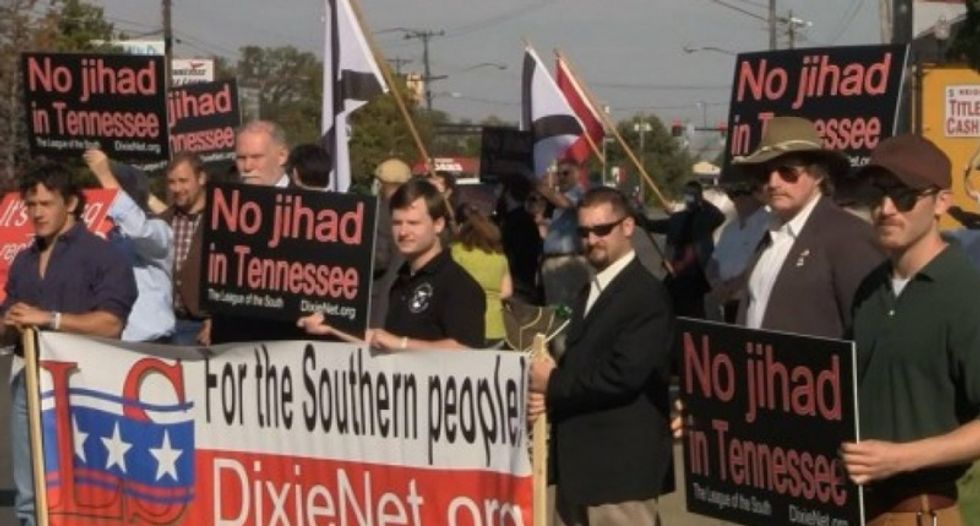 A League of the South rally (screenshot/leagueofthesouth.com)

The League of the South (LOS) promotes its brand through a multimedia web domain that features videos, photographs, and articles promoting white supremacy.

According to the Southern Poverty Law Center (SPLC), the LOS is a hate group that defends the enslavement of black people and "denounces the federal government and northern and coastal states as part of 'the Empire,' a materialist and anti-religious society."

"In recent years, [the LOS] has become increasingly rabid, writing about potential violence, criticizing perceived Jewish power, and warning blacks that they would be defeated in any 'race war,'" the SPLC writes. An explicitly pro-secessionist organization, the LOS boasts thousands of members nationwide.

What follows is a partial tour of the LOS' updated web presence, which aims to draw a new generation of activists into the armed defense of white supremacy in the United States.

An emboldened LOS welcomes visitors to its "cutting-edge site for a cutting-edge movement." 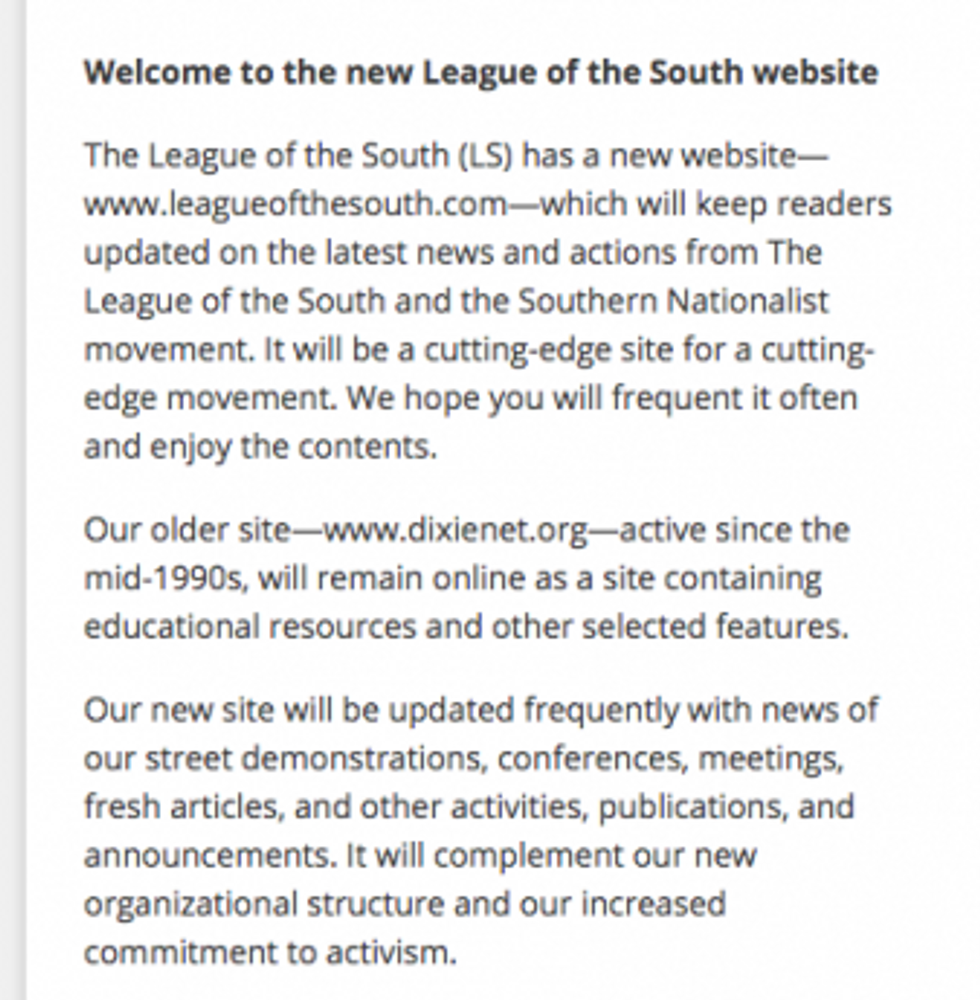 The LOS is careful to eschew the label of "neo-Confederate." 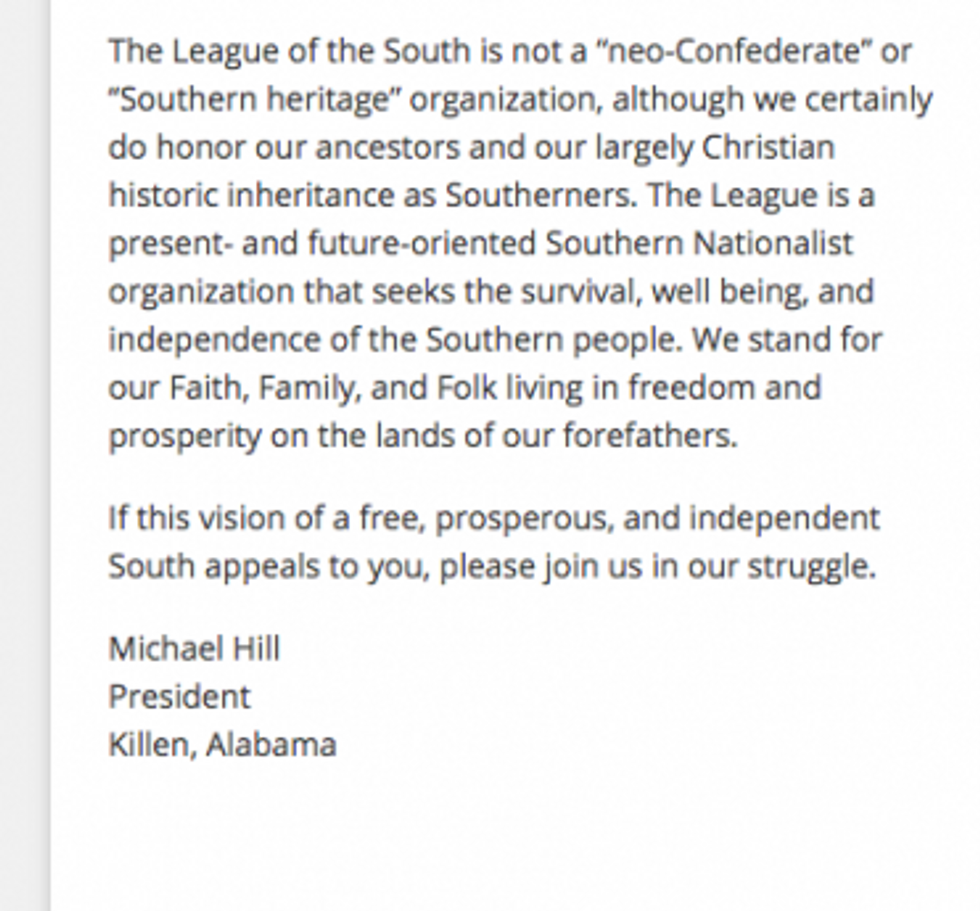 However, the LOS posts pictures on its website of members calling for the secession of southern states from the union. 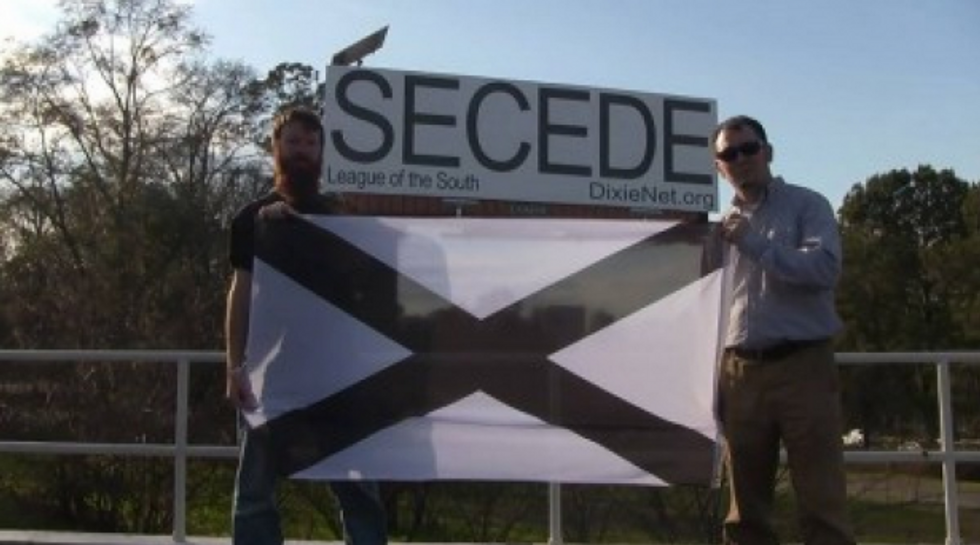 The League of the South apparently has concerns about an armed insurrection by Muslims in Tennessee. 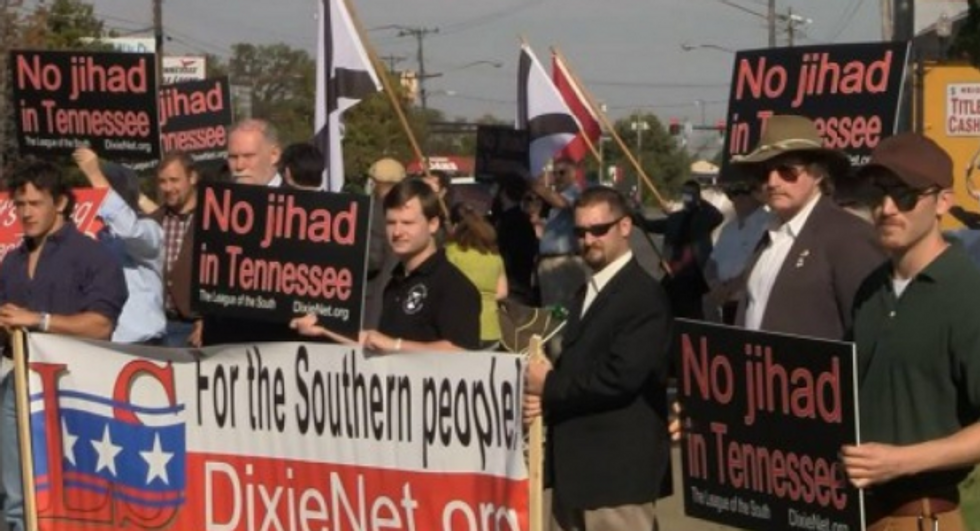 Further, the white supremacist group has discriminatory opinions that extend to gay people, too. 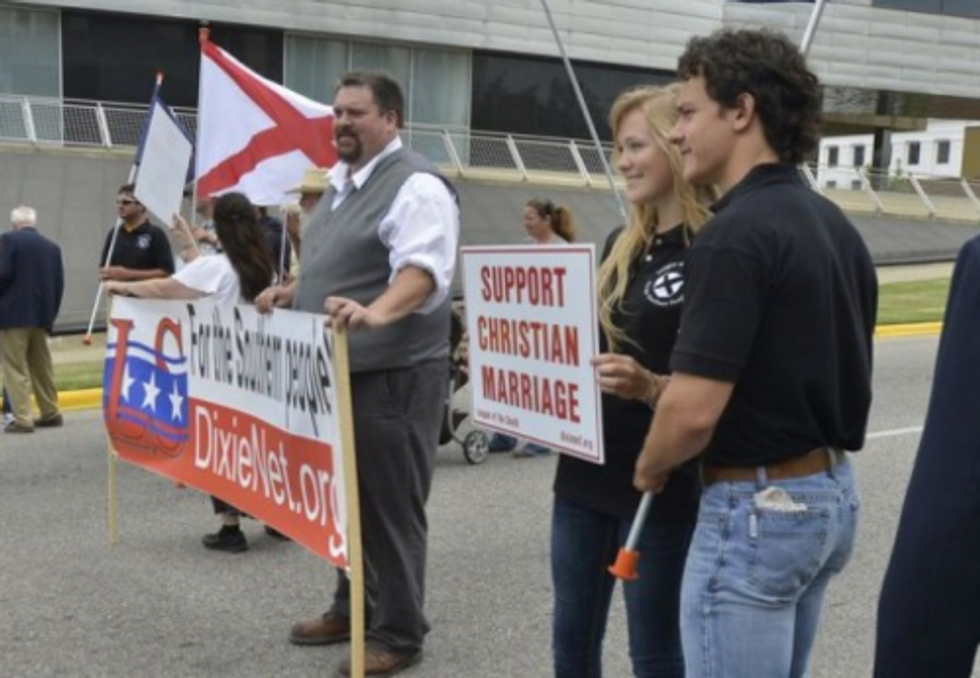 The LOS claims ownership of outdoor, public space whose basic infrastructure is paid for with taxpayer dollars. 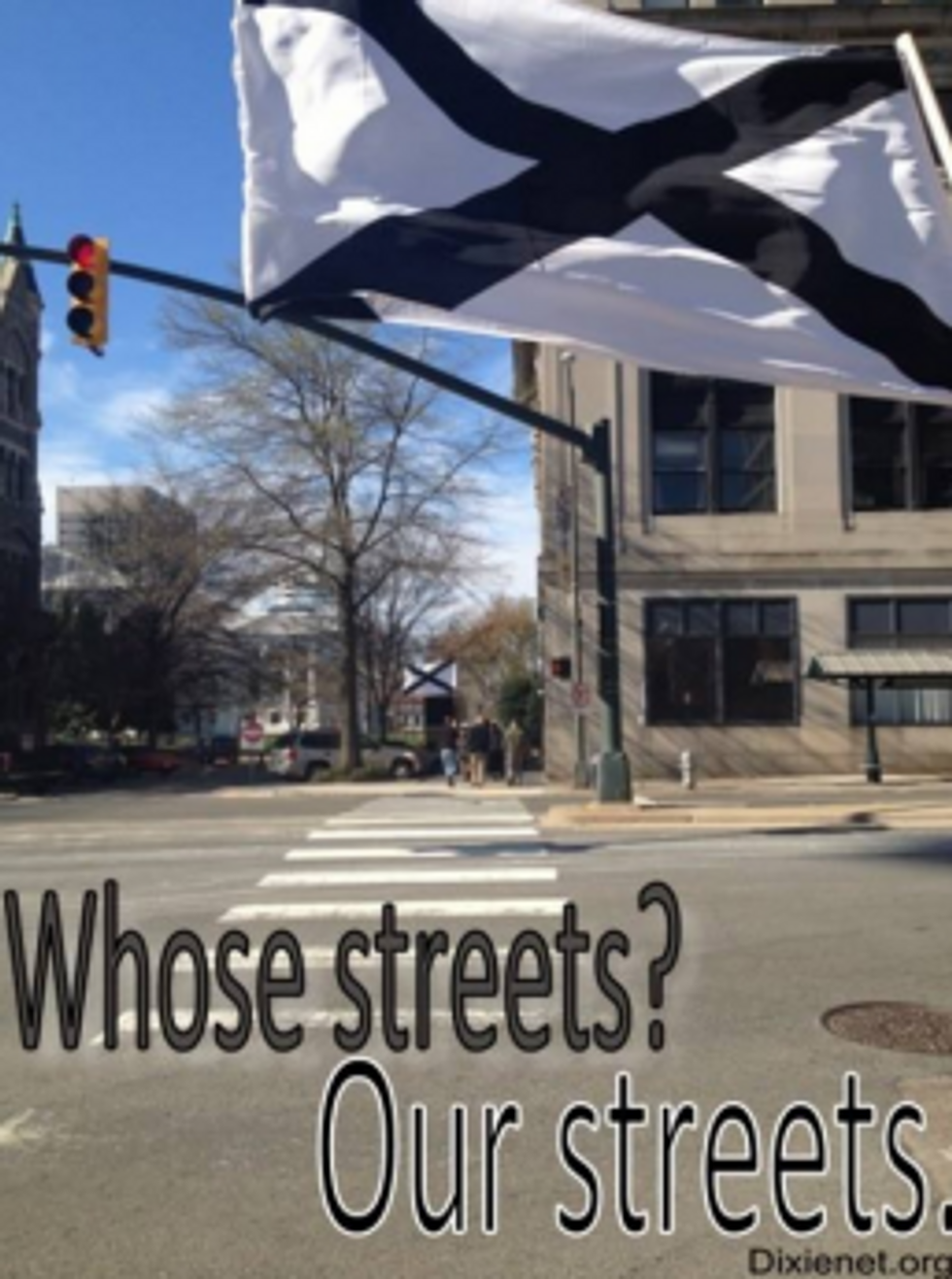 Prolific with blog posts on any given day, the LOS was particularly inspired on the Fourth of July, the day Americans celebrate an end to British colonial rule several centuries ago. Michael Hill, LOS' president, complains he stands "in the Cultural Marxists' cross-hairs. And they have pulled the trigger."

Hill goes on to whine about "cultural genocide" of white people, citing nary an example. 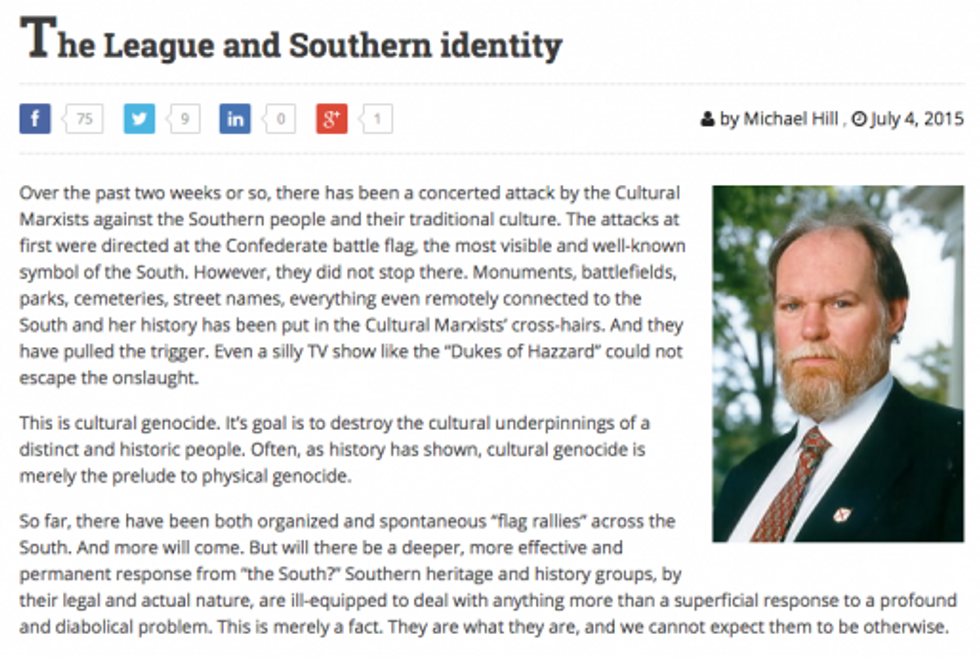 Identifying himself as neither "racist" or a "xenophobe," Hill continues his July 4 rant by explaining that "Southern people" are "white people... of European descent, who are committed to preserving a kith and kin, blood and soil nation on the lands bequeather by our ancestors who settled this area from the 17th century onward." 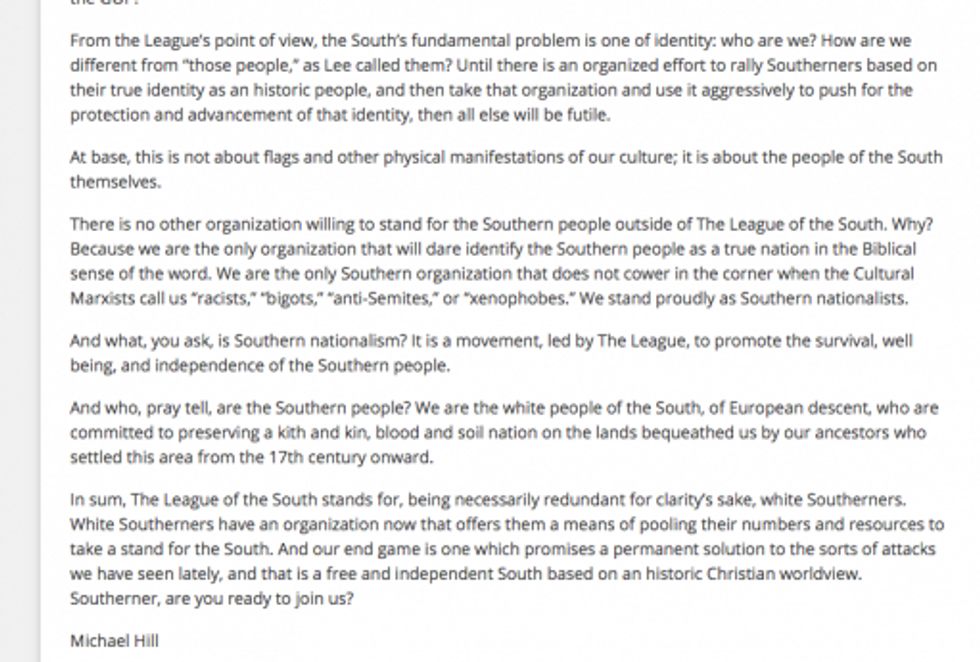 Hill informs readers he will celebrate America's successful rebellion against British occupation by flying a Confederate flag, which represents the largest military effort in American history to overthrow the U.S. government by force. 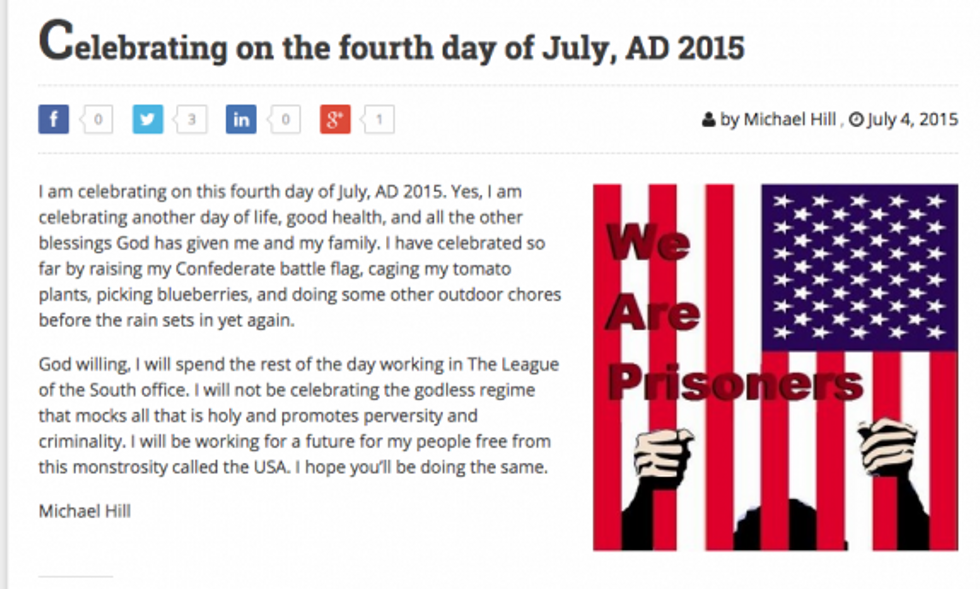 In a comment thread on the LOS site last month, Hill describes black people in dehumanizing terms, as a means to justify their subjugation. Hill cites the Bible as his source for slavery advocacy.