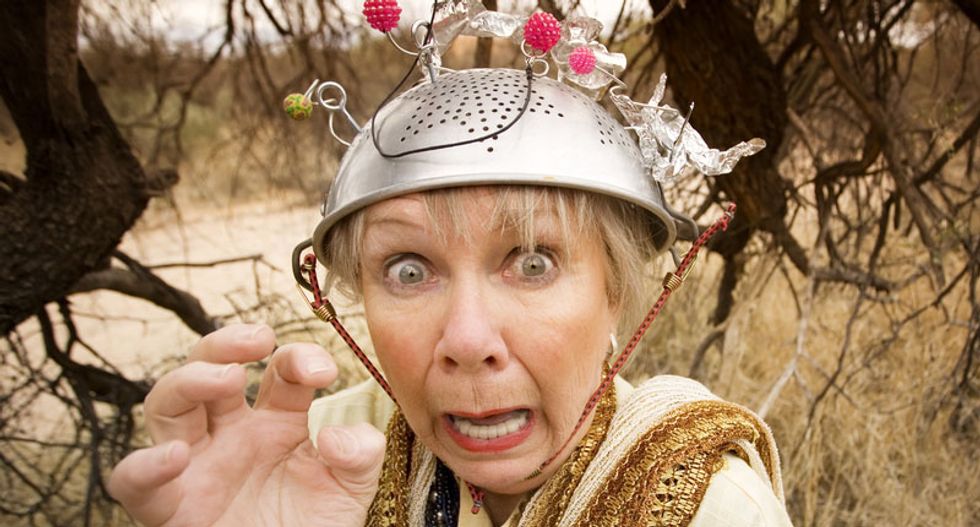 A new study has examined the comments on climate science-denying blogs and found strong evidence of widespread conspiratorial thinking. The study looks at the comments made in response to a previous paper linking science denial and conspiracy theories.

Three years ago, social scientists Lewandowsky, Oberauer, and Gignac published a paper in the journal Psychological Science titled NASA Faked the Moon Landing—Therefore, (Climate) Science Is a Hoax: An Anatomy of the Motivated Rejection of Science .

The paper detailed the evidence the scientists found that, using survey data provided by visitors to climate blogs, those exhibiting conspiratorial thinking are more likely to be skeptical of scientists’ conclusions about vaccinations, genetically modified foods, and climate change. This result wasreplicated in a follow-up study using a representative U.S. sample that obtained the same result linking conspiratorial thinking to climate denial .

Of course science denial and conspiracies go hand in hand

This shouldn’t be a terribly shocking result. When confronted with inconvenient science, those in denial often reject the evidence by accusing the experts of fraud or conspiracies. We saw a perfect example of this behavior just a few weeks ago. When scientists at NOAA published a paper finding that there was no ‘pause’ in global warming, one of the most common responses from those in denial involved the conspiratorial accusation that the scientists had somehow fudged the data at the behest of the Obama administration.

Nevertheless, nobody likes being characterized as a conspiracy theorist, and so those in the denial blogosphere reacted negatively to the research of Lewandowsky and colleagues. Ironically, many of the attacks on the study involved conspiratorial accusations , which simply provided more data for the social scientists to analyze. For example, the authors were accused of everything from faked data to collusion between Lewandowsky and the Australian government.

As a result, a year later Lewandowsky, Cook, Oberauer, and Marriott published Recursive fury: conspiracist ideation in the blogosphere in response to research on conspiracist ideation . The paper analyzed blog comments that mentioned the Moon Landing paper. It became the most-read paper ever published by the journal Frontiers in Psychology.

However, the study was subsequently accused of being defamatory because the public blog comments had not been made anonymous in the paper. At the request of Frontiers, the authors anonymized the comments, but the journal still withdrew the paper out of fear of legal action . Its failure to stand behind sound scientific research led to the resignation of three of Frontiers’ editors: Ugo Bardi , Björn Brembs , and Colin Davis .

Subsequent to the withdrawal of Recursive Fury, the journal Frontiers published an article that denied the link between HIV and AIDS. Despite widespread protest from the scientific community, the journal declined to withdraw the paper and instead classified it as an “opinion” piece . More recently, Frontiers fired 31 Editors in the medical arena, who expressed concern that Frontiers’ publication practices are designed to maximize the company’s profits, not the quality of papers, and that this could harm patients.

Lewandowsky, Cook, Oberauer, Brophy, Lloyd, and Marriott have now published Recurrent fury: Conspiratorial discourse in the blogosphere triggered by research on the role of conspiracist ideation in climate denial in a different journal - the Journal of Social and Political Psychology.

In this latest study , university undergraduate students (mainly psychology majors) were given the comments from denial blogs, together with genuine scientific critiques of the Moon Landing paper provided by 3 psychology PhD students at the University of Bristol.

In the end, the participants clearly identified the comments from science-denying blogs as conspiratorial in nature, and the comments from the 3 PhD students as genuine scientific critiques. In fact, the results were quite strong.

Normally we might expect the data to have a shape similar to that of a Bell Curve, with some of the comments mentioning the Moon Landing paper exhibiting a moderate level conspiratorial thinking, but few to an extreme degree. On the contrary, the results were heavily skewed, with most denial blog comments about the paper being heavily suspicious and questioning the motives of the authors.

I do not recall ever having seen such a strong effect in 30 years of behavioural research, and I have certainly never encountered ratings that favoured the extreme end of the scale to the extent observed here.

Given that those denying a 97% consensus among scientific experts must find a reason to reject that consensus, it’s not at all surprising that conspiratorial thinking is common among those who deny climate science. Conspiracy theories have even become a prime argument against climate policy among some top Republican presidential candidates like Ted Cruz, who said in a recent interview ,

I think the data is driven by politicians who have always supported more government control.

However, Lewandowsky explains why he believes the results of his study are important, if not surprising,

a. Conspiracism, by definition, is not skepticism. Hence it is important to show that self-anointed “skeptics” are not skeptical.

b. The blog content was identified not only as conspiracist, but also as lacking in scholarly incisiveness. This is very important because it shows that conspiracism isn’t “a price you pay for skepticism”—on the contrary, conspiracism detracts from scholarly critique.

c. The public is entitled to know what is happening on blogs, given that there is a pipeline from blogs to right-wing media to (in some countries) Parliament and/or harassment of meteorological and climatological institutions.

The key finding of Recurrent Fury is that those who label themselves global warming “skeptics” share more in common with those paranoid of a one-world government than with Galileo.