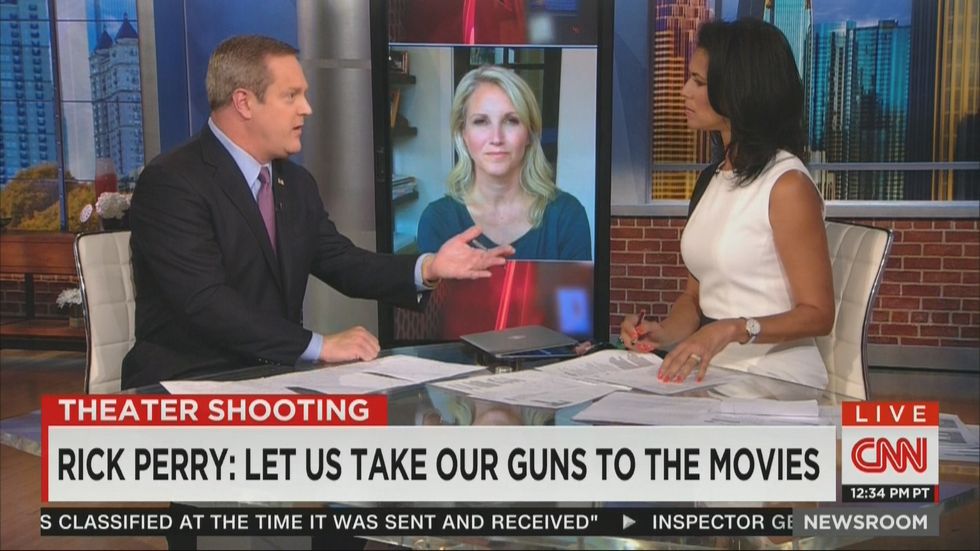 The panel was responding to former Texas Gov. Rick Perry (R)'s assertion that armed movie patrons would make everyone safer from mass shootings.

"The fear of armed resistance could be the thing that deters someone from picking that particular target," said Holloway.

However, he said, "Movie theaters are unique because they are dark and often times loud,and if you go in there and open fire, who knows what you're going to hit?" So, he suggested, firing blindly into the dark would not be a "good first choice."

Robbins argued that with more than 300 million guns on the streets in the U.S., "I don't think there is anything called a gun-safe zone anywhere in this country, and to think that we should just hope and pray that there is a licensed concealed weapons holder in a movie theater that can act appropriately in a mass shooter situation is putting the emphasis on the wrong thing."

Holloway said that if there is someone trained to take out an active shooter in the theater, "you don't want that person acting inappropriately, you want them to seek cover and then to decide whether or not they have a shot they can safely take. Otherwise, it can only make matters worse."

Studies have shown that in most active shooter situations, even people who are trained in the effective use of firearms are unable to stop the gunman with their own weapons. If they are able to get to their weapons and fire at all, they often end up striking bystanders or themselves.