Dashcam footage shows Texas cop threatening Sandra Bland with Taser: 'I will light you up' 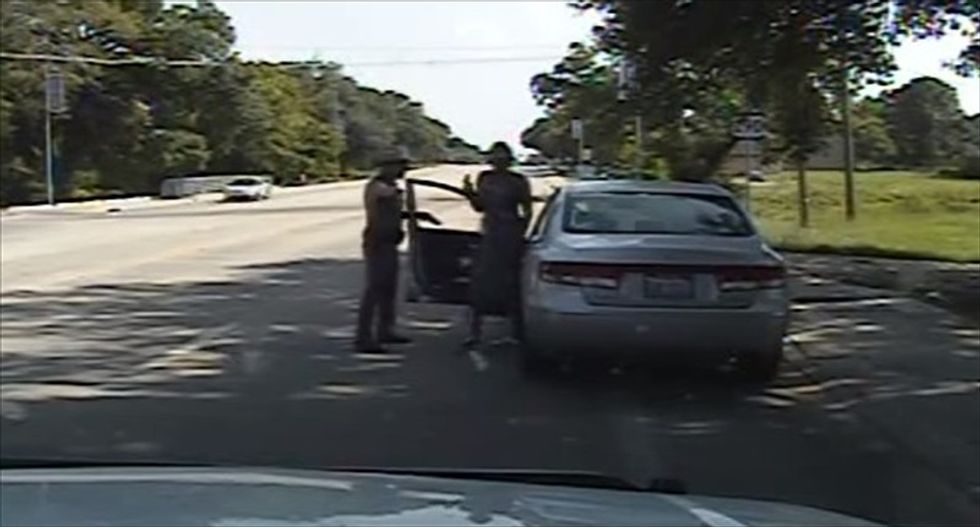 Dashboard camera footage of Sandra Bland's arrest, as released on Tuesday by the Texas Department of Public Safety. [YouTube]

Dashboard camera footage of Sandra Bland's arrest shows the arresting officer mocking her when she said she was epileptic, and threatening her with his Taser after trying to pull her out of her car.

The video shows state trooper Brian Encinia telling Bland, "I will light you up," before yelling, "Get out!"

According to Mother Jones, the Texas Department of Public Safety criticized Encinia after releasing the footage, saying he did not "maintain professionalism" during the July 10 encounter. Bland was found dead inside a jail cell in Waller County three days later, renewing criticism against law enforcement officials for use of excessive force.

After being pulled over, Bland can be heard telling Encinia she switched lanes to get out of his way because he was speeding up behind her. Seconds later, he asks her to put out her cigarette. When Bland refuses because she is still in the car, Encinia orders her to get out of the vehicle.

Attorney Cannon Lambert, who is representing Bland's family, has argued that this is what caused the trooper to escalate the encounter. The footage shows Encinia opening the door without her consent.

"Step out or I will remove you," he insists.

"I am getting removed for a failure to signal?" she asks. He then reaches inside, saying, "I am gonna yank you out of here."

"Don't touch me," Bland says. "I'm not under arrest. You don't have the right to take me out of the car."

"You are under arrest," he responds. However, he does not identify any charges against her except for "resisting arrest." She was later charged with assault on a public servant.

Encinia can then be seen walking Bland back to the sidewalk, with his Taser drawn, until they are both off-camera. A struggle can be heard. Bland later accuses the trooper of having his knee on her back and slamming her head on the ground. When she tells him she is epileptic, he responds, "Good."

As Reuters reported on Monday, authorities are investigating Bland's death as if it were a murder, but activists are calling for an independent inquiry into the case.

Watch the footage, as posted on Tuesday, below. Bland's interaction with Encinia begins around the 8:30 mark.