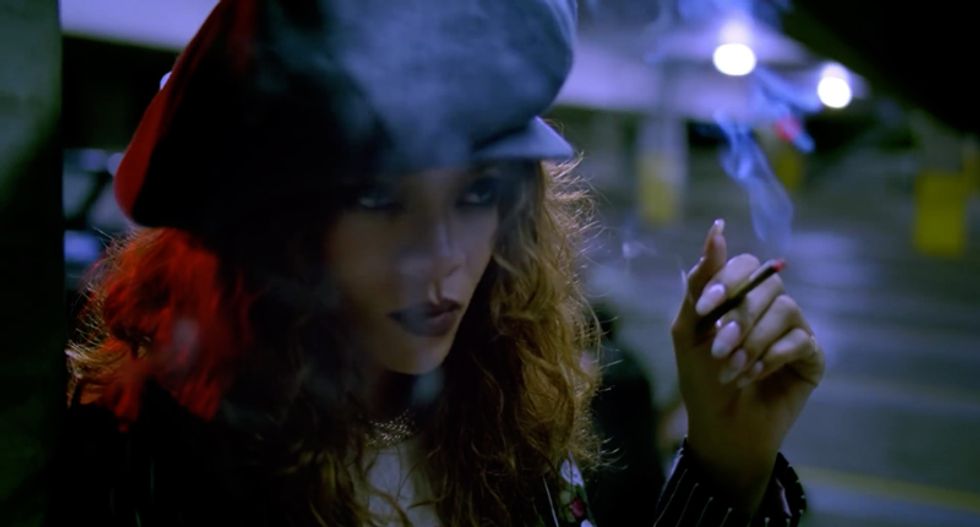 Screenshot from Rihanna's "Bitch Better Have My Money"

“Language. Nudity. Violence,” warns the first frame of the latest video from pop provocateur Rihanna. What follows certainly lives up to the billing.

Depending on which commentator or social media spat you choose, the video – viewed 12 million times since its release – is either an empowering challenge to music industry stereotypes or a racist and gory piece of misogyny.

Bitch Better Have My Money (BBHMM) is a slick seven-minute film, co-directed by one of the few black women in America who has managed to get right to the top of a male- dominated pop industry.

The plot is simple – an accountant has defrauded the singer out of money, so she kidnaps his wife, a spoiled, wealthy white woman complete with chi-chi dog and diamonds. With two friends, she bundles her into a trunk, strips her, swings her upside down from a rope, knocks her out with a bottle, then lets her almost drown in a swimming pool.

When that doesn’t get her the money, Rihanna finds the accountant, straps him to a chair, shows a collection of knives presumably used to finish him off, and then is shown blood-covered and naked in a trunk of money.

A show of sisterhood it isn’t, although the homage to Hollywood’s girl power blockbuster Thelma and Louise, with Rihanna and her co-conspirators riding off in a 1960s blue convertible, suggest the artist might think differently.

The song, the second single from the singer’s eighth album, is based on Rihanna’s grievance against an accountant, Peter Gounis, whom she filed a lawsuit against in 2012, claiming he gave her “unsound” financial advice that led to a loss of $9m in 2009 alone. She won a multimillion settlement.

Predictably, BBHMM ignited a furious debate. A headline on Refinery29 declared the video “Not Safe For Work or Feminists” while Twitter accused Rihanna of glorifying violence against women, and condemned the “kidnapped female” trope. Rolling Stone was attacked for praising the video and crediting the two minor male roles while not even giving a name to the actress who plays the main role.

Rachel Roberts, who has made several Vogue covers, said the offer of her part was “irresistible”. “The video was Rihanna’s concept,” Roberts said last week. “She co-directed it, so she personally cast me. Despite her out-there public image, she’s very professional and hands-on. The whole thing was an insane thrill ride. Helicopters, boats, gunfire, stunts, holding my breath underwater, a dozen locations, and a Pomeranian toy dog.” She praised Rihanna as “an undeniable talent”.

In an America seething over endemic racism, the presentation of a black woman exacting revenge on a white exploiter has been less controversial than the nudity. Vogue.com columnist Karley Sciortino said: “It’s good to normalise the female body. In so many music videos where you see nudity, it’s framed in these really specific ways: abstract female body parts just looking hot. When Rihanna’s naked she isn’t posing in a hyper-sexual way, she’s covered in blood and she’ll cut your dick off. She looks powerful, but it’s almost casual, normalised. It’s about showing a powerful representation of the female body, where women are in charge of the way that they’re being viewed.”

Rihanna’s co-directors, Leo Berne and Charles Brisgand, said her intention was clear. “From the beginning she was like, “I don’t care if it’s not aired on TV’,” Brisgand said. “She wanted something that people don’t expect from her.” The director said it was Rihanna’s idea to hang Roberts from her feet naked.

Rihanna, who has 22 million followers on Instagram, is one of the few whose appearance on a magazine cover will boost sales. Her past as a victim of domestic violence has brought her fans among young women who see a successful survivor. She certainly has the power to provoke – and she is using it.