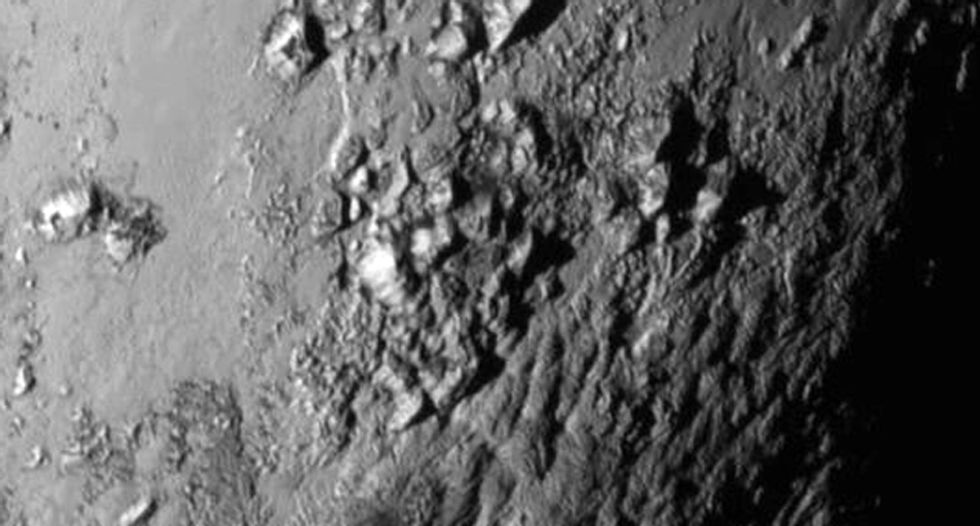 Icy mountain ranges can be seen rising from Pluto's surface, according to the first close-up images released Wednesday from NASA's New Horizon's spacecraft after its historic of flyby of the dwarf planet.

The mountains' elevation reaches 11,000 feet (3,400 meters), the US space agency said, or about as high as the Rocky Mountains.

Scientists were also stunned to see a close-up section of Pluto that showed no sign of craters, despite its home in the Kuiper Belt, the region beyond Neptune where cosmic debris is constantly pelting Pluto and its five moons.

NASA said the findings suggest that Pluto is geologically active, and contains parts that are youthful in astronomical terms, perhaps less than 100 million years old, a small fraction of the 4.5 billion year age of the solar system.

Scientists first saw hints of a geologically active phenomenon on Triton, a moon of Neptune that was glimpsed by the Voyager 2 space mission in the 1980s. It also had virtually no impact craters.

"Now we have settled the fact that these very small planets can be very active after a long time and I think it is going to send a lot of geophysicists back to the drawing boards to try and understand how exactly you do that," said principal investigator Alan Stern.

"The bedrock that makes those mountains must be made of H20, of water-ice," said Stern.

Other kinds of ice that are abundant on the surface of Pluto are made of nitrogen, methane and carbon monoxide.

"You can't make mountains out of that stuff. It is just too soft," Spencer told reporters.

New Horizons, a $700 million nuclear-powered spacecraft, spent much of Tuesday snapping pictures and collecting data as it zoomed by Pluto.

The piano-sized spacecraft passed 7,750 miles -- or about the distance from New York to Mumbai, India -- from Pluto's surface.

Those images, including color data on Pluto and some of its five moons, offer 10 times more detail than ever before seen.

But the information the spacecraft has gathered is only beginning to reach Earth, after a journey of nearly 10 years and three billion miles (4.8 billion kilometers).

And the data is going to keep coming in for the next 16 months, according to Stern.

Other images released Wednesday showed Charon, the largest moon of Pluto -- measuring about the size of Texas -- as having its own belt of troughs and cliffs that extend about 600 miles (960 kilometers) across the surface, as well as a canyon that is four to six miles deep.

"Charon just blew our socks off when we had the new image today," said deputy project scientist Cathy Olkin.

"It is a small world with deep canyons, roughs, cliffs, dark regions that are still slightly mysterious to us," she added.

"There is so much interesting science in this image alone."

Not since NASA's Voyager 2 mission, which flew by Neptune in 1989, has a spacecraft visited a planetary system.

And Pluto, long considered the farthest planet from the Sun before it was reclassified as a dwarf planet in 2006, has never before been explored.

So far, a series of pictures from the spacecraft have revealed curious surface features, from a dark shadowy whale figure to a bright heart shape.

But just what these shapes are, or what kind of terrain they represent, remains unclear.

The images released Wednesday have a resolution of about 100 meters (yards) per pixel.