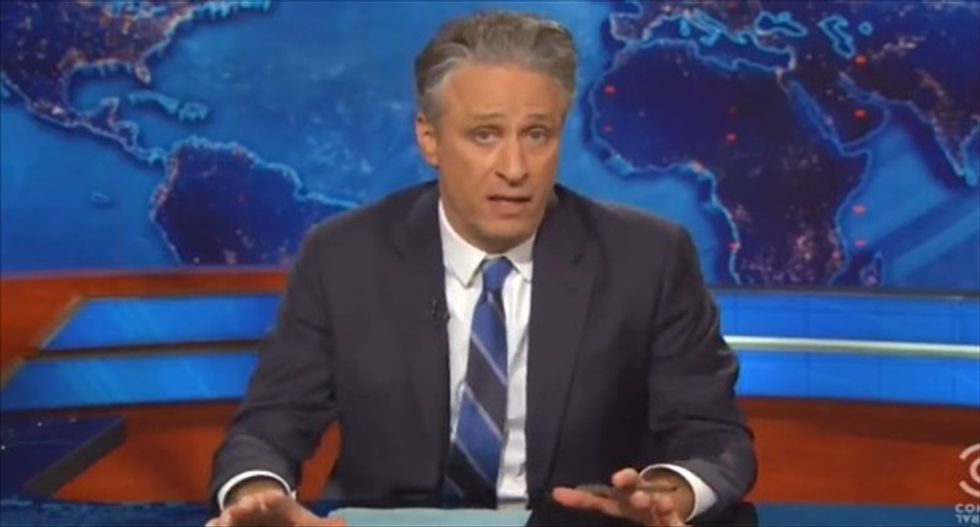 While Daily Show host Jon Stewart lost his patience on Thursday with Republicans -- and especially Sen. Ted Cruz -- for downplaying Donald Trump's remarks denigrating undocumented immigrants, he did thank Trump for giving him enough material to carry the show until the end of his run.

"It is hard to get mad at Donald Trump for saying stupid things, in the same way you don’t get mad at a monkey when he throws poop at you at the zoo," Stewart explained. "It's a monkey. It's what they do. In some ways, it's on you for watching. What does get me angry is the ridiculous, disingenuous defending of the poop-throwing monkey."

Case in point, Cruz's attempt to describe Trump's describing the majority of Mexican immigrants as criminals, "rapists" and drug dealers as the reality TV star "speaking out" on the perceived security issues at the US-Mexico border, only to be silenced by "mainstream media" unwilling to admit there is an issue.

"That is such buzzword-nothing bullsh*t," Stewart shouted. "Who doesn't want to admit what?"

To emphasize his point, Stewart replayed Trump's remarks throughout the segment, both in slow-motion for Rep. Steve King's benefit, and with a "classy" sing-along ball.

"Stop pretending," Stewart said. "[Trump] said Mexico is purposely sending us drugs, killers and rapists. And within that group there may be -- he's not sure -- some people who are good. That's the part he's not sure about. He's only sure about the overwhelming number of killers, rapists and drug addicts Mexico has sent us. That is what he f*cking said."

Stewart tried to console himself by musing that Trump's campaign would naturally falter once the "farce" of Trump's candidacy was exposed, only to see that the real estate mogul is actually in second place in early GOP polls.

On Thursday, The Daily Beast profiled Sam Andrews, a former member of the right-wing paramilitary group the Oath Keepers, who called for the Capitol protesters to arm themselves ahead of the insurrection — and now is trying to distance himself out of fear that the FBI could come after him.

"Andrews was outside the Capitol on Jan. 6, but says he did not enter the building," reported Kelly Weill. "Following Donald Trump's election loss, Andrews appeared in a widely shared video that called on the right to converge on D.C. 'armed, in large groups," as The Washington Post previously reported. Those groups, he said, should show up 'en masse in D.C., armed, demanding, not asking, that we get a peaceful resolution on these voter corruption issues.'"

'Senators Should Be Competent'