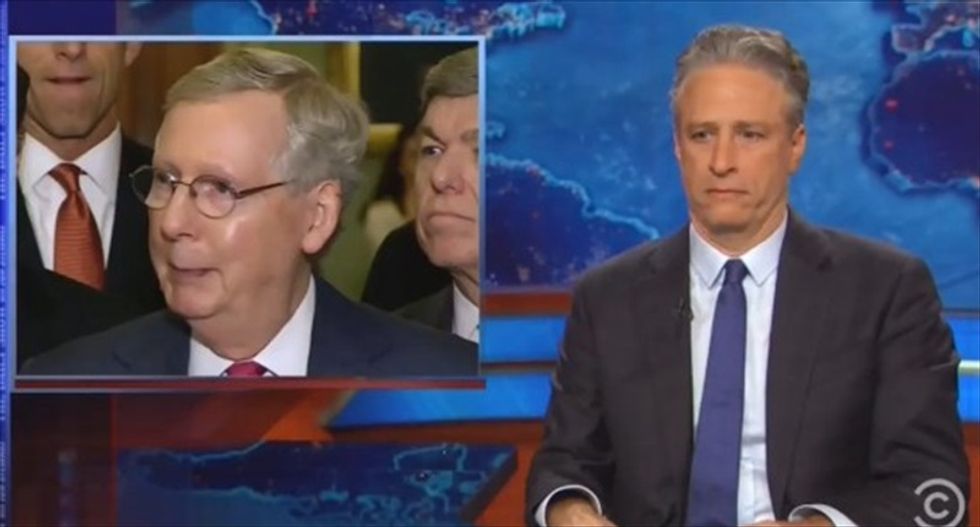 Daily Show host Jon Stewart tore himself away from Donald Trump coverage -- mostly -- on Wednesday to knock Senate Majority Leader Mitch McConnell and other Republicans for railing against the US nuclear agreement with Iran, in some cases doing so sight unseen.

"You didn't even read the deal?" Stewart said of Sen. Lindsey Graham. "Basically, you're treating this critical international accord like some kind of bizarro iTunes user agreement."

The host also showed footage of McConnell failing to explain how he would have specifically improved the agreement other than to say he wanted "a deal under which Iran would not be able to acquire nuclear weapons."

Stewart also mocked the various doomsday predictions by US conservatives and Israeli Prime Minister Benjamin Netanyahu, who went from fretting it would take "weeks" for Iran to have a nuclear arsenal three years ago to predicting it would happen within 10 to 15 years.

"With the way the world is going? F*ck," Stewart scoffed. "A nuclear Iran's gonna be the least of our problems in 10 or 15 years. Iranian nukes will be a break from swimming through our climate change-flooded cities fighting Ebola zombies with our teeth 'cause we can't hold guns thanks to our iPhone-shaped hand tumors. That's what's gonna be a treat."

If the US really wanted to bring Iran down, he argued, it would skip the drone strikes and use "loan strikes" to bury Iran under a hill of debt, much like Germany did to Greece. That McDonald's is already pushing to open franchises in Tehran, he said, shows it is already happening.

"Trust me -- after the complete Americanization of Iran, the only thing they'll be six months away from developing is diabetes and heart disease," Stewart said.