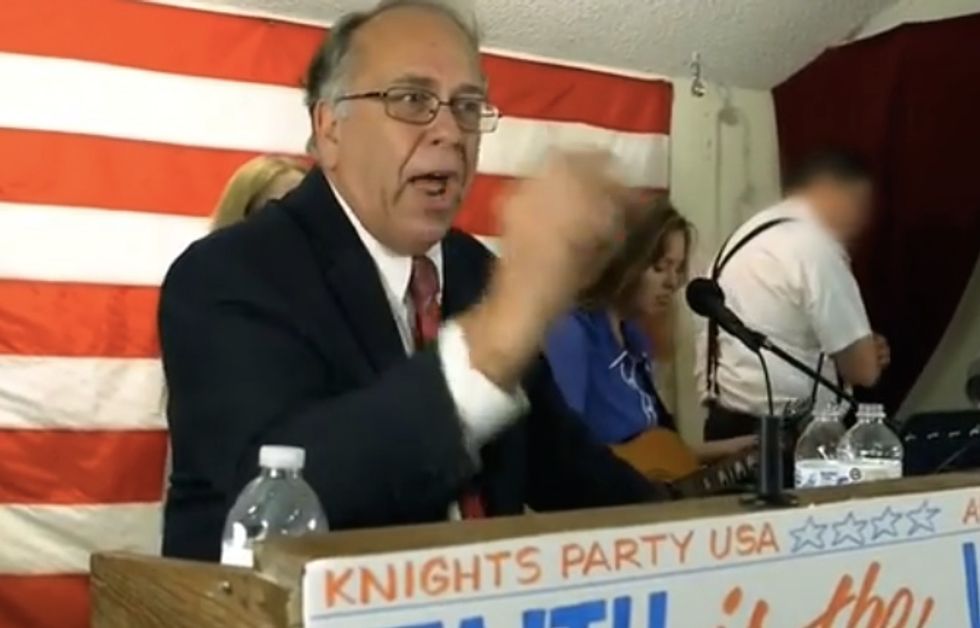 The Ku Klux Klan is encouraging interested citizens to attend a five-day training camp later this month, where students will study leadership skills intended to help them become better advocates of white supremacy in their own communities.

Listed under "national events" on the KKK website is the Soldiers of the Cross Training Institute (SCTI), to take place on July 20-25 outside of Harrison, Arkansas.

"The primary focus of this school," according to its website, "is to train future leaders who can return to their communities with the tools to become actively involved in this struggle for our racial redemption"

The institute's founder and chief instructor is Thomas Robb, who has acted as the Klan's "national director" since the 1980's, according to the Southern Poverty Law Center. As part of a PR effort to make the KKK more mainstream, Robb did not take the traditional leadership title of "imperial wizard," and rebranded the white nationalist group as the "Knights Party."

"Never before in the history of our people have we faced a challenge so threatening," begins the narrative on SCTI's homepage. According to the white supremacist organization, there is a "world-wide rebellion against our people." White people, says the KKK-endorsed summer camp, "are facing genocide."

"There are few who have the courage," the SCTI site reads, "to stand before the abyss and point the way to our racial redemption."

The leadership development school nestled in the Ozark mountains includes some militaristic language in its programming descriptions:

"Even though the hour is late and the night is deep upon us, we are sounding forth this final call to men and women – devout and brave – to rally to the flag and join this New Crusade for race, faith and homeland.... Though the beginnings are small and humble, like the first recruits in a mighty army, the potential is vast and powerful... We must mobilize ourselves into a force for freedom."

Classes at the institute focus on boosting participation and recruitment in the white nationalist movement, "establishing white consciousnesses in a modern society," and understanding how to effectively use propaganda.

The SCTI accept students as young as 16, but enrollees under the age of 18 must provide a signed, notarized letter of permission from their parent or legal guardian.

"Students will be expected to attend all classes and to wear professional casual attire," read the SCTI's camper stipulations. "Tuition for the six days of instruction will be $500 and will cover the cost of all books, materials, room, and meals. We will attempt to provide scholarships as funds are available.... Students who complete all classes and earn a satisfactory grade level will be awarded a Certificate of Achievement."

The SPLC notes that, after President Barack Obama's 2008 election, Robb "characterized what he saw as a 'race war … between our people, who I see as the rightful owners and leaders of this great country, and their people, the blacks.'"