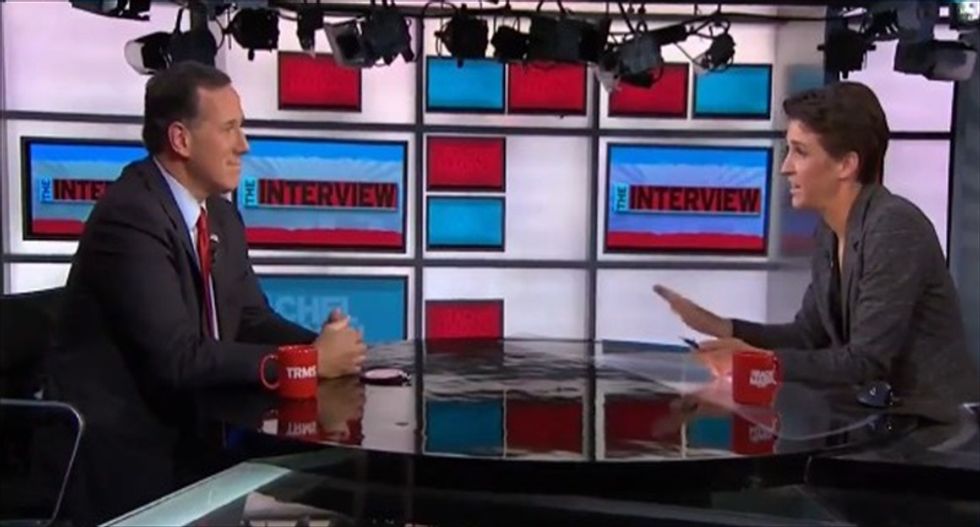 "You're fundamentally wrong on civics," Maddow said. "If there is a question as to the constitutionality of a law, it gets adjudicated. The second syllable in that word means it gets decided in the judiciary. The Supreme Court decides whether or not a law is constitutional. So you could not now pass a law that said, 'We're banning same-sex marriage.'"

Santorum then argued that "Congress can pass anything it wants to pass," regardless of the high court's decisions to justify passing a new ban on same-sex marriages.

"So you want them to pass a moot bill?" Maddow asked.

"It wouldn't be moot," he insisted, saying that the court could find it "misread the tea leaves" between its ruling last month and a possible new bill.

Maddow also showed footage of Santorum making his argument at the National Right To Life Convention.

"Is that the country you live in?" Santorum asked, repeating a line from his speech. "Of course it is, right?"

"But it's not a superior branch of government," Santorum said. "If the Congress comes back and says, 'We disagree with you, and we're able to pass a law and get it signed by the president, saying the courts are wrong --"

"No, you could not pass a law that could contradict the constitutional ruling of the Supreme Court," Maddow countered, as Santorum began asking why. "You could amend the Constitution."

"Because they're ruling on the constitutionality of that law," she responded. When Santorum tried to argue that the ruling was made "on an unconstitutional basis," Maddow shot back, "They decide what's constitutional."

The former Pennsylvania senator later hedged when Maddow asked whether he thought people chose to be gay, citing the legal ramifications of the court's decision.

"If it's an immutable characteristic -- you don't know if it's immutable or not?" she pressed.

"You're worrying about the consequences of this without knowing whether or not it's true," Maddow said, before asking again, "Do you think that some people choose to be gay?"

"There are people who are alive today who identify themselves as gay and lesbian and who no longer are," Santorum replied. "I've met people in that case. So I guess maybe in that case, maybe they did."

Watch the interview, as aired on MSNBC on Wednesday, below.