Mayci Breaux and Jillian Johnson: Lafayette victims were a bright student and an artistic entrepreneur 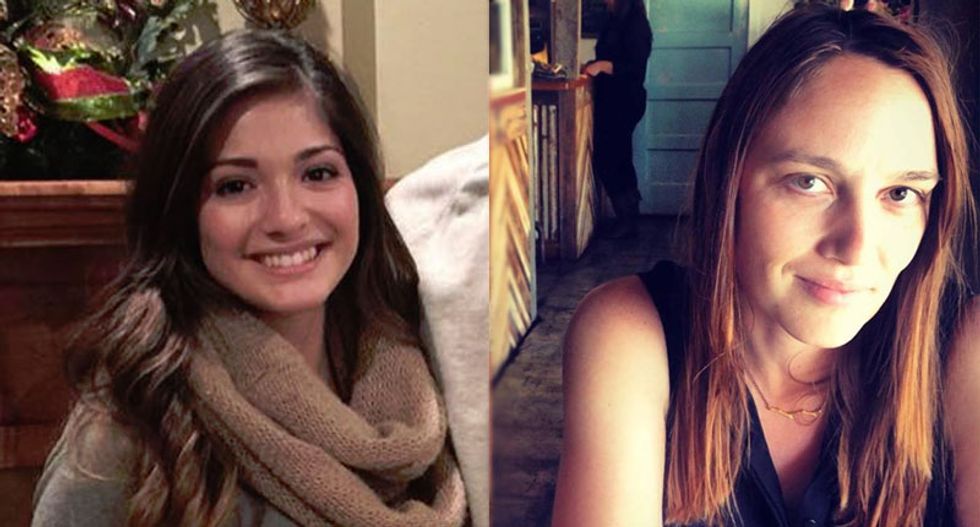 Mayci Breaux (L) and Jillian Johnson (R) were killed after a gunman opened fire inside a packed auditorium in Lafayette, Louisiana (Facebook)

A young university student beloved in her hometown and a woman who ran a business with her husband and played in a bluegrass-folk band were murdered in a Louisiana movie theater, police said on Friday.

They named the victims of the Lafayette shooting as Mayci Breaux, 21, and Jillian Johnson, 33.

Amidst social-media messages of support for the families of both victims, Johnson’s husband wrote on Facebook: “Our hearts are shattered. We will love you forever. She was a once-in-a-lifetime gal.”

A friend of Breaux wrote on Instagram: “God really does give his best angels their wings first.”

Breaux was a student at Louisiana State University in Eunice and lived in Lafayette, where she was working at clothing retailer Coco Eros. She was attending the 7pm showing of Trainwreck on Thursday night when 59-year-old John Russel Houser opened fire . Nine people were injured. One person remained in critical condition on Friday, police said.

According to a friend’s Twitter account , Breaux was with her boyfriend, Matthew Rodriguez, a student at the Lafayette campus of LSU.

Breaux filled her own Twitter account with teasing asides to her younger sister, joking commentary on classes and life, and playful, meme-strewn conversations with friends about nights out, American Idol and The Bachelorette. She was a cheerleader at her high school, her Facebook page showed, and a finalist in the 2012 beauty contest of the annual Louisiana Sugar Cane Festival.

Photos show a large and close-knit family from Franklin, Louisiana, where her father owns a large sugar cane farm .

“Nothing ever prepares you for a loss,” Breaux’s employer wrote on its Facebook page. “Much less the loss of such an amazing young woman.”

Family and friends expressed their grief as soon as they learned of her death, with one relative writing: “ It’s like it’s not even real. ”

“I’m ready to be awake from this nightmare,” another relative wrote .

“Nobody will ever know why God wanted her home so soon, but it’s all part of his plan,” a friend, Jeff Gotti, wrote on Instagram. “It was great to get to know you and your family that I have been so close to over the past couple of years. You were truly beautiful inside and out. God really does give his best angels their wings first. Fly high Mayci.”

The friend’s account also suggested that Rodriguez suffered a gunshot wound. By mid-Friday morning, police had not identified the injured.

Johnson, who died in hospital, was co-owner with her husband of a craft shop, the Red Arrow Workshop, in Lafayette.

“I work with my big brother Bram and my awesome husband, Jason, in the retail biz,” she wrote on her LinkedIn page .

Johnson studied fine arts at the University of Louisiana’s Lafayette campus a decade ago. Her husband, Jason Brown, studied journalism. The couple had been married just over two years, and expressed a love of Louisiana’s history and southern culture.

“Our hearts are shattered,” Brown wrote on Facebook. “We will love you forever. She was a once-in-a-lifetime gal. A mother, daughter, sister and a truly exceptional wife. She was an artist, a musician, an entrepreneur and a true renaissance woman. She was the love of my life and I will miss her always.”

Brown said his thoughts were with the Breaux family and Johnson’s best friend, who was with her in the Grand Theatre.

“This was a senseless act and, as is the case with all such acts, there is no playbook, no rules on how to cope. We’re trying our best to pull ourselves together.”

Johnson played ukelele in an all-female bluegrass band, The Figs , who for years played in the area.

“Went to bed shocked and saddened, and woke up to even more sickening news,” her friend Elizabeth Brooks wrote on Facebook.

“We will miss our dear friend Jillian Johnson immensely. If you didn’t know her, you knew her work. For over a decade, she has branded our beloved community and culture, its inside jokes and idiosyncrasies.”

“Jillian was so talented, so creative, so committed to making Lafayette a better, more beautiful, more interesting place,” her friend William Winters wrote on her Facebook page. “Sending love to her family, friends, and community as we all struggle to make sense of the senseless in a world that is dimmer without her light.”

Others praised her activist work and her creativity, saying they could hardly believe Louisiana had lost “ such a bright light ”.

“There are no words,” friend Shannon Hughes wrote. “You were a rock star at life and you have left your mark for generations to come. Lafayette has lost one of its brightest stars.”

“Don’t lose sight of the fact that these two individuals had a vision, had a name, had a future,” he said. “It wasn’t to die as they did horribly in this theater here.”