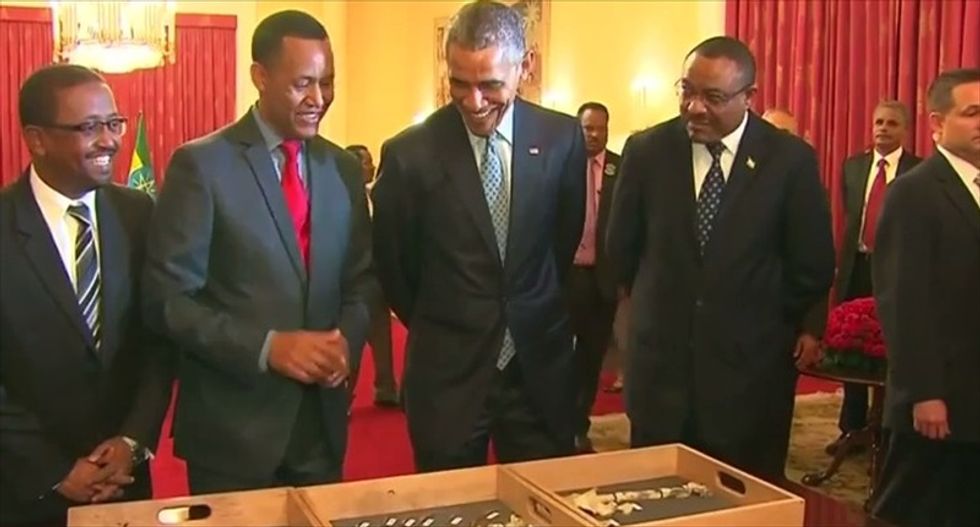 Lucy is a 3.2 million-year-old member of Australopithecus afarensis and the most complete skeleton of an early human ancestor ever discovered

She had never heard of Barack Obama, or the United States for that matter, and did not say a word when she met the president before a state dinner in Ethiopia.

Lucy, a 3.2 million-year-old member of Australopithecus afarensis, is the most complete skeleton of an early human ancestor ever discovered. The fossil, normally housed in Ethiopia’s national museum, was brought to the national palace on Monday for Obama’s visit and helped put the ephemera of politics in perspective.

The US president even touched a vertebra from Lucy’s torso after being encouraged by Dr Zeresenay Alemseged, senior curator of anthropology at the California Academy of Sciences.

Obama, the first sitting US president to visit Ethiopia, commented: “That’s amazing. So Lucy was on the chain to homo sapiens.” He asked “how many jumps” there were between Lucy and homo sapiens.

Alemseged said there were multiple generations in between. Referring to later discoveries, he added, “we have the evidence that homo sapiens indeed emerged in Ethiopia”.

Lucy had a very small brain, primitive wrists, feet and teeth and was only one metre tall, but was still declared “the grandmother of humanity” after her discovery in Ethiopia’s Afar region. Paleoanthropologist

Donald Johanson, who made the find in 1974, played a Beatles cassette at his campsite that night and the song “Lucy in the Sky with Diamonds” came on, giving the fossil its name.

Obama was so fascinated that he came back later with some of the members of Congress who made the trip to Africa. Alemseged explained: “It means he had fun here, and he wanted to share that excitement.”

As for encouraging Obama to touch the bones, unthinkable for almost anyone else, Alemseged said: “Extraordinary people have extraordinary access.”

Scientists present could not recall a time when the bones of Lucy were displayed uncovered. The last time they were displayed outside the museum was two years ago, during the 50th anniversary celebration of the African Union, whose headquarters are in Addis Ababa.

Dr Berhane Asfaw said the bones of Lucy were transported in a group of “multiple cars so people don’t know which one the fossils are in – as you are protecting your president”.

Later, Obama told the Ethiopian prime minister, Hailemariam Desalegn, and other guests at a state dinner that Lucy is a reminder that the world’s people are part of the same human family.

“You know Ethiopians are an ancient people in an ancient land,” he said. “We honour Ethiopia as the birthplace of humankind. In fact, I just met Lucy, our oldest ancestor. As your great poet laureate wrote, ‘Here is the land where the first harmony in the rainbow was born … Here is the root of the Genesis of Life; the human family was first planted here.’”

Seeing this ancestor, he added, “we are reminded that Ethiopians, Americans, all the people of the world are part of the same human family, the same chain. And as one of the professors who was describing the artifacts correctly pointed out, so much of the hardship and conflict and sadness and violence that occurs around the world is because we forget that fact. We look at superficial differences as opposed to seeing the fundamental connection that we all share.”

Watch a report on the visit, as posted by Reuters, below.