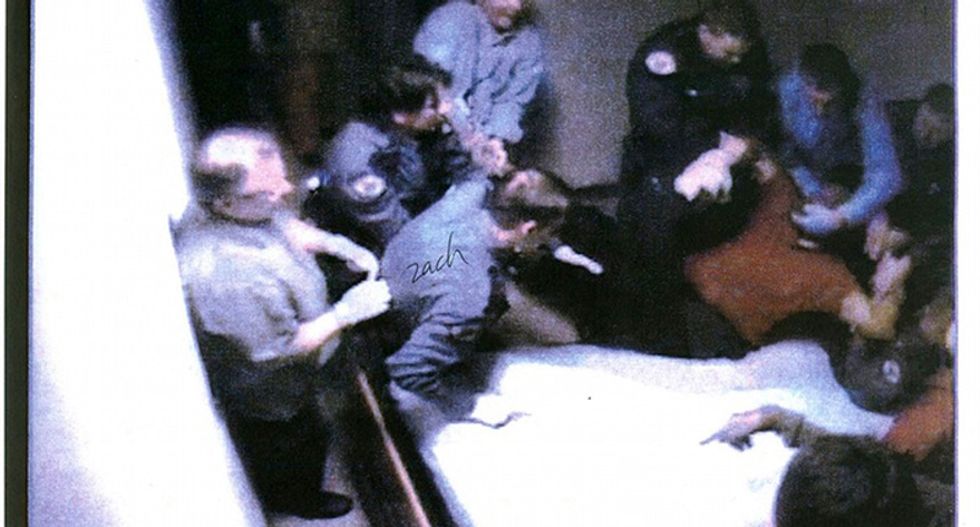 Five years before University of Cincinnati officers Eric Weibel and Phillip Kidd corroborated the seemingly false account of an officer now charged with murder, they helped as Kelly Brinson was shocked and shackled

Two police officers who corroborated a seemingly false account of the fatal shooting of Samuel DuBose in Cincinnati were previously implicated in the death of an unarmed, hospitalised and mentally ill black man who died after he was “rushed” by a group of seven University of Cincinnati police officers.

Kelly Brinson, a 45-year-old mental health patient at Cincinnati’s University hospital, suffered a psychotic episode on 20 January 2010 and was placed inside a seclusion room at the hospital by UC officers. He was then shocked with a Taser three times by an officer and placed in restraints. The father of one – son Kelly Jr – then suffered a respiratory cardiac arrest and died three days later.

In court documents obtained by the Guardian and filed by Brinson’s family in a civil suit against the UC police and the hospital, all seven officers are accused of using excessive force and “acted with deliberate indifference to the serious medical and security needs of Mr Brinson”.

According to the lawsuit, before Brinson was placed in restraints he “repeatedly yelled that slavery was over and he repeatedly pleaded not to be shackled and not to be treated like a slave”.

The documents named University of Cincinnati officers Eric Weibel and Phillip Kidd – the same men who, in a formal report, supported officer Ray Tensing’s claim that he was “dragged” by DuBose’s vehicle on 19 July.

Tensing’s account that he was “dragged” was used as justification for the lethal use of force. It was later dismissed as an attempt to mislead investigators and as “making an excuse for the purposeful killing of another person” by the Hamilton County prosecutor Joseph Deters, who charged Tensing with murder on Wednesday.

The revelation that officers Weibel and Kidd provided the corroboration for Tensing’s account of the incident was met with anger by Brinson’s family members, who told the Guardian on Thursday that if both officers had been disciplined correctly in 2010, the death of DuBose might have been avoided.

“If something had been done in 2010, I don’t think this wouldn’t have happened,” Kelly Brinson’s brother, Derek, said in an interview.

The officers involved in his brother’s death were “supposed to be fired”, Brinson said. “But what happened was because we had an out of court settlement, they had immunity and they couldn’t be prosecuted.”

“Everybody … associated with this case was supposed to be terminated,” he said. “And they didn’t – they didn’t terminate them.”

Brinson’s family settled a federal civil court case with the hospital and the police department for $638,000. All University of Cincinnati campus police officers were also removed from patrolling the psychiatric wards at the hospital after Brinson’s death.

The University of Cincinnati police division report on DuBose’s death, which supports the argument Tensing was dragged, is written by officer Eric Weibel. Weibel does not claim to have witnessed the shooting, but he writes of Tensing’s uniform: “I could see that the back of his pants and shirt looked as if it had been dragged over a rough surface.

A Guardian analysis of Tensing’s body-camera footage released by the Hamilton County prosecutor on Wednesday shows that on two occasions immediately after DuBose is shot, Kidd reinforces Tensing’s claim he was dragged: “Yeah, I saw that,” Kidd says in the aftermath of a split-second killing of DuBose, as Tensing recounts how he was dragged.

On Thursday, the prosecutor’s office released the footage from Kidd’s body camera, which shows that the officer – along with another University of Cincinnati police officer, David Lindenschimdt – was behind Tensing during the shooting.

Shortly after the release of their body camera footage, UC police confirmed both officer Kidd and officer Lindenschmidt had been placed on administrative leave.

A synced-up video of body-camera footage from Tensing, Kidd and Lindenschimdt reveals the dramatic aftermath of the shooting and shows that Lindenschimdt also backs Tensing’s claim he was dragged, later telling another officer: “I just arrived to back him [Tensing] up, the guy took off. The officer was stuck in the vehicle. He fired one round.”

Neither Kidd nor Weibel responded to requests for comment from the Guardian left at listed numbers.

Witness documents for the 2010 case show that it was a different officer who deployed the Taser against Brinson, but both Kidd and Weibel were involved in restraining him. In Weibel’s handwritten account of that incident, he states that he had observed Brinson was “greatly agitated” after he was placed in a seclusion room and a request for leather restraints was made.

Following five minutes of discussion between hospital staff and Brinson, Weibel recalled that force then became “warranted” and he indicated to another officer “that I was going to rush the patient” as Brinson “turned his attention away”.

“At this point, without announcement, I quickly lundged [sic] at the patient,” Weibel writes in block capital letters.

Brinson was then shocked with a Taser and placed in restraints, according to the complaint filed in US district court. Weibel writes in his statement that he later observed Brinson was non-responsive and “had a blank stare on his face”, at which point a doctor was called.

According to Kidd’s deposition, he heard “grunts” coming from Brinson after the Taser was used. Kidd told attorneys he assisted in restraint by placing his elbow on Brinson’s jaw and his hand near his temple and face.

The University of Cincinnati police division declined to respond to a request for comment on the 2010 death.

• Do you have information about an officer-involved death that the public deserves to know? Help us document every police killing in America with The Counted