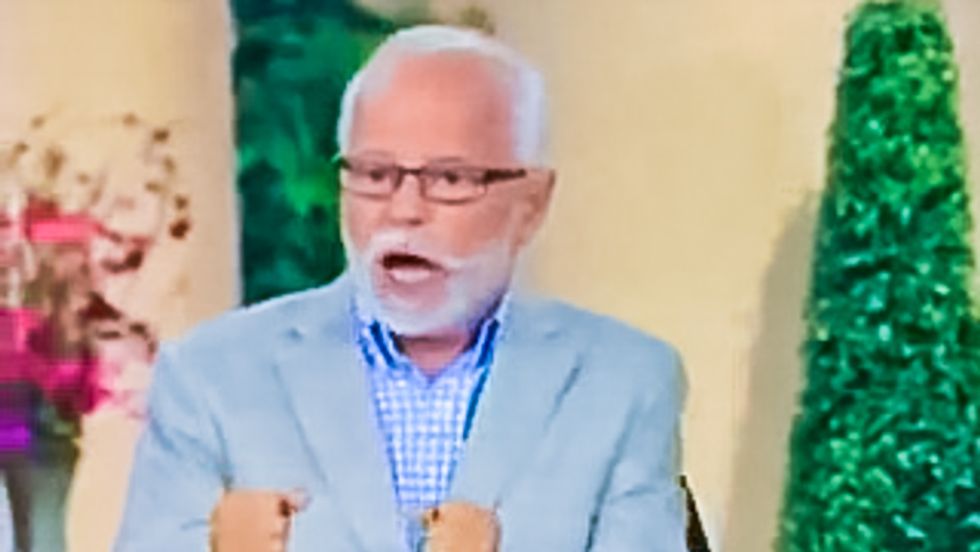 Televangelist Jim Bakker warned this week that a historic deal with the goal of preventing Iran from getting a nuclear weapon was to blame for the drought in California and was a sign of the Second Coming of Christ.

During a discussion about the End Times on The Jim Bakker Show, Alabama Pastor John Kilpatrick explained that God was punishing America for abortions, idolatry, homosexuality and fornication.

"What God said is that blood itself had a life," Kilpatrick told Bakker. "So whenever a doctor aborts a baby and that blood is being flushed down the commode, God hears the voice of that baby going down that commode, saying, 'Help! Forgive Lord! Forgive them! Forgive my mother!'"

Kilpatrick pointed out that the Bible said that "the land is full of sexual sin" like homosexuality.

"Because the curse of the sin the land lies parched," he said. "What's going on in California right now with such a drought."

The Alabama pastor noted that God was also punishing the U.S. for "breaking covenant."

"We've been Israel's second home!" Bakker agreed. "We have been a second Israel. We have been somewhat as a God-blessed nation, a spiritual haven for the Jew. Israel and us are the only ones!"

"Every detail has taken place, people," he added.

"We're breaking covenant," Kilpatrick continued. "But not only are we breaking covenant now, but this [same-sex marriage] law has just come down from the Supreme Court. You've got the blood moons coming up... all this stuff is dovetailing and coming together right now."

"We are negotiating this minute while we are sitting here with Iran," Bakker lamented. "We're making covenant with Iran, who have vowed -- vowed -- to destroy Israel."

"We're not going to be able talk like this on the air much longer," the pastor said. "We have broken covenant with Israel and made covenant Israel's number one enemy."

"Can you believe a president would treat somebody of the stature of [Israeli Prime Minister] Benjamin Netanyahu like that?" Kilpatrick asked.

Watch the video below from The Jim Bakker Show, broadcast July 16, 2015.