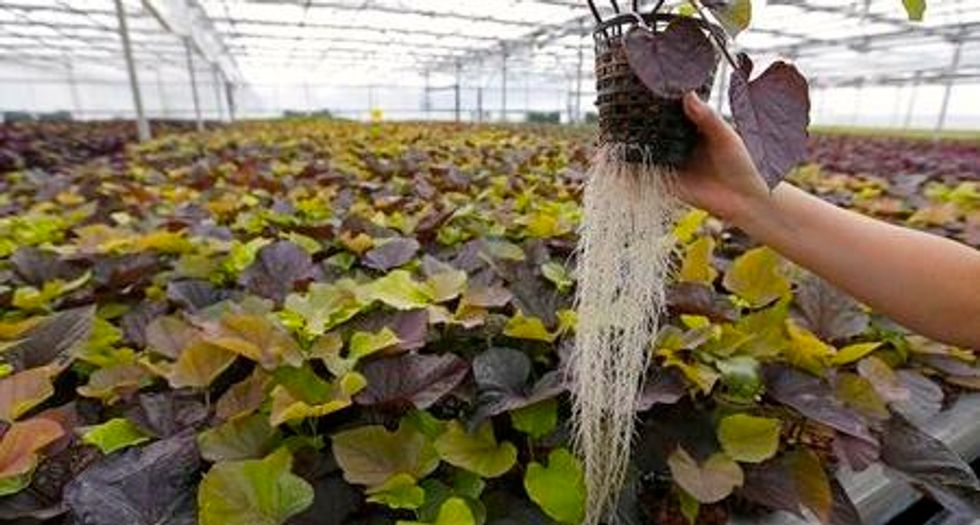 A quiet village in eastern France is home to an unusual greenhouse.

Farmers at the site in Laronxe, about 100 km (60 miles) from Strasbourg, are growing plants in an unconventional way so they can "milk" them for rare molecules that could be used in medicines, cosmetics and agrochemicals.

Several major companies, including German chemicals group BASF and French cosmetics maker Chanel, have teamed up with Plant Advanced Technologies (PAT) in the hope of securing privileged access to the so-called biomolecules it extracts through the use of a patented technique.

"Our job is to develop vegetal platforms that will produce very rare biomolecules on an industrial scale," Jean-Paul Fevre, co-founder of PAT, and a former head of research with French drugmaker Sanofi, told Reuters.

The 10-year-old French firm tests around 100 plant species every year. They are grown using aeroponics, a soil-free culture system that allow roots to interact with a mist containing various nutrients to allow the plants to grow.

The biomolecules PAT hunts are those produced when plants' defenses are triggered, which it has found to be most useful for commercial applications.

In a process similar to vaccination, farmers spray on liquids containing traces of a bacteria, insect or fungus that attack the plant - to activate its defenses - before submerging the roots in a solvent to extract the desired molecules. The operation is repeated several times a year.

"Plants generate defense molecules naturally," said Frederic Bourgaud, a PAT vice president. "We ensure they produce as many of them as possible," he said.

PAT is not alone in seeking to extract commercially promising ingredients from plants - the field includes firms such as Italy's Indena and France's Pierre Fabre and Naturex. But it is the only company to use the "milking" technique to harvest molecules.

BASF, the world's largest chemicals company by sales, sealed a deal with PAT in May under which it gains exclusive access to tests involving molecules that could be used in agriculture, such as biological pesticides. In return, the German group provides PAT with research teams and industrial know-how.

"What makes PAT stand out is their ability to target the right plants. On a blind search, you may end up testing some 150,000 molecules before identifying the right one but I would say they have a 30 percent rate," said Jean-Marc Petat, BASF France's head of sustainable development, referring to their rate of success for finding potentially useful molecules.

The global biopesticide and synthetic pesticide market will grow from $54.8 billion in 2013 to $83.7 billion by 2019, according to research firm BCC. Biopesticides on their own accounted for around $3.6 billion of the market last year and that figure could reach $6.9 billion by 2019, it said.

Chanel was the first company to sign a production agreement with PAT, in 2012, teaming up to manufacture a new anti-aging cream made out of an edulis, a plant native to South Africa, that is now on the market.

PAT says it has 28 promising molecules in its pipeline and that some of its products could be used to design medicines to fight diseases such as cancer and Alzheimer's.

The company, listed on the European small and midcap Alternext index and owned by its three co-founders, aims to become profitable by the end of 2016.

The firm also aims to become one of the first groups to extract proteins from genetically modified carnivorous plants. The proteins could be used by the health sector to manufacture cheaper and safer insulin or growth hormones, it says.