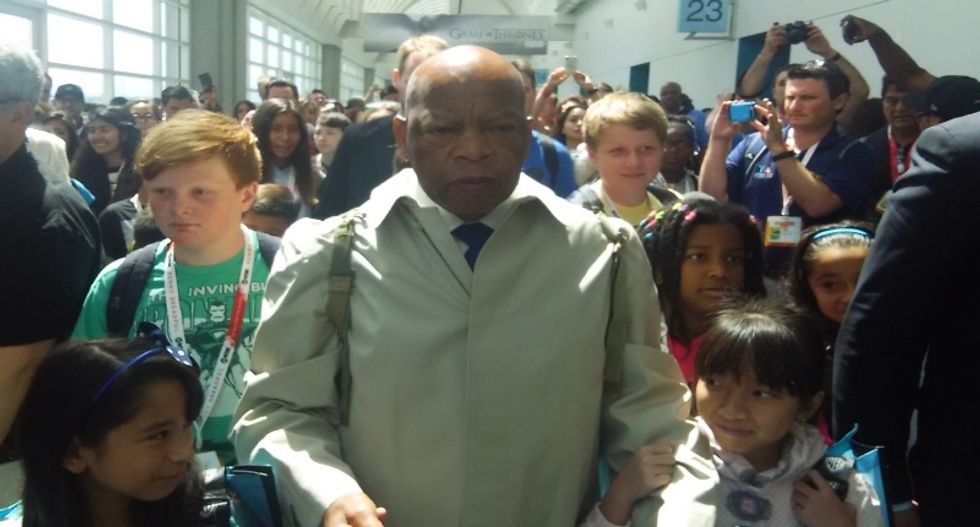 Rep. John Lewis (D-GA) leads a march of children for a signing of his autobiographical graphic novel, "March," during San Diego Comic-Con on July 11, 2015.

While most of the San Diego Comic-Con is devoted to pure pop-culture promotion, Rep. John Lewis (D-GA) said his second appearance at the event on Saturday was part of his push to inspire a new generation to pursue social justice.

"In America right now we're just too silent," Lewis said during a presentation for the second chapter of his autobiographical graphic novel March. "We need to make some noise."

While the series' first chapter dealt with Lewis' early life, Lewis and co-writer Andrew Aydin and artist Nate Powell devote the second installment to the congressman's experiences as part of the Freedom Riders. Aydin, who is also Lewis' press secretary, pointed out to the audience that Lewis wore a backpack and trenchcoat to Saturday's panel that were replicas of the ones he wore during the March 1965 march on the Edmund Pettis Bridge in Alabama.

The panel took place a day after South Carolina removed the Confederate battle flag from its state capitol, the mention of which drew applause from the audience. Lewis noted that many of the people who beat him and his fellow protesters during the "Bloody Sunday" march wore that same flag on their helmets.

"It's a symbol of a divided house," he said.

A spokesperson for Top Shelf Productions, the series' publisher, said that since its debut two years ago, March has been used as an educational resource in schools in more than 40 states. Powell said the creative team worked to make the book "incontestable" as a historical document as well as a comic.

For his part, Lewis stressed both student and teacher involvement with the material, ending the panel with a march of children onto the crowded convention floor for an autograph signing.

"It's really good to see how people are responding. The great majority of the American people -- especially young people -- they're doing what they can to get things right," he told The Raw Story during a brief interview. "We will get it right because of the young. The young are leading the way. They are pushing those of us in American government at the national level, state and local level, to do more, to get on board. If not, we would all be left behind."

He also had an exchange with University of California-San Diego instructor Zeinabu Davis, who has used March as reading material both in her classes, and her daughter's elementary school.

"Many of them did not know this history," she said of her students. "We're not talking about it enough. We're not teaching about it enough. For me as an African-American woman, it's hard. I have to go through these experiences and talk about it over again and again. It gets to be a little bit debilitating. But it's very necessary work."