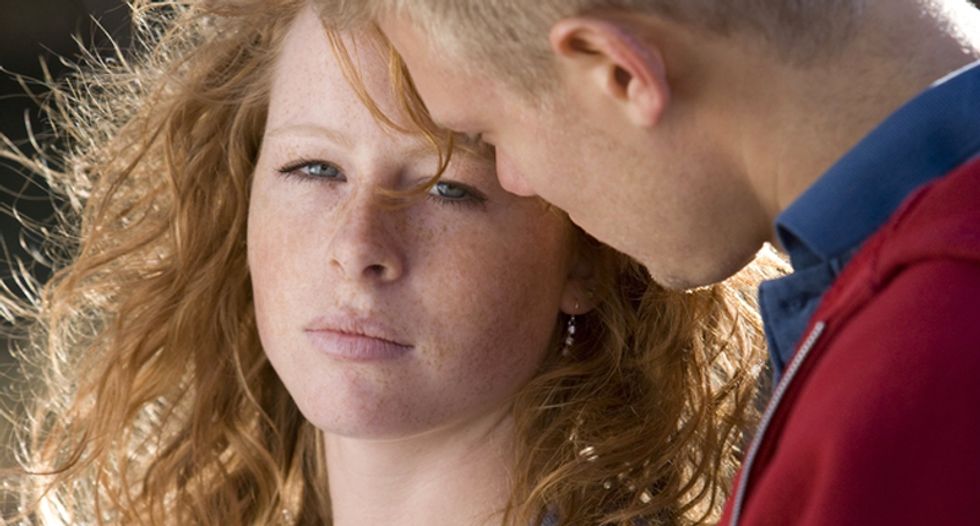 As a former Quiverfull fundamentalist Christian in the business of rescuing women from religious subjugation and abuse, very little biblically-justified misogyny shocks or surprises me, but a recent post by the cowardly Patriarch who writes anonymously on a site called “Biblical Gender Roles,” is too abhorrent to ignore.

BiblicalGenderRoles.com is run by a 40-something Christian self-proclaimed expert on “Feminism and the deterioration of gender roles in America and in Western society.” His credentials include “more than 15 years” cumulative marriage experience (he is divorced and remarried).

In his July 11, 2015, post titled, “Is My Husband Raping Me?,” Mr. Biblical Gender Roles responds to an extremely distraught female reader whose husband frequently demands sex against her wishes, even when intercourse is painful for the wife.

Here’s the appalling “biblical response” to the question of whether it is wrong for a husband to have sex with his wife when she is in pain, according to Mr. Biblical Gender Roles:

“It depends. Had he just had sex with her in the last few days? Then perhaps he should have put her need to not experience more pain and discomfort ahead of his need for sex. But if she had been in pain for weeks or a month and he finally came to her and said ‘Babe I need this, I promise I will make it quick’ – then she should have put his need for sex above her need to not experience additional discomfort.”

Only when forced sexual relations could jeopardize the broodmare - er, wife’s future fertility could it possibly be considered a sin for the husband to refuse to respect her wish to not have sex while in pain.

Sadly, this bullshit gets worse. Much worse!

To the inappropriate and offensively-worded question, “Was her husband treating her like a whore?,” the contemptible Mr. Biblical Gender Roles wrote the following reply:

What wives who make these statements are actually saying is “He does not romance me anymore, he does not talk to me enough and spend time with me outside the bedroom enough”. When wives express these sentiments it comes from a place of them feeling like their husbands have not earned the right to have sex with them. Only when their husband makes them feel the way he once did, then and only then will they be able to have sex with him without feeling like “a whore”, “a prostitute” or “just plain used”.

While insisting that “talking to [his wife] on a daily basis and knowing her better is NOT a prerequisite to sex in marriage,” the anonymous fuckwit at Biblical Gender Roles chides a woman who would desire or expect to be treated like a human being by the man who wants to use her for his own sexual gratification.

“She seems to have been very grudgingly yielding to her husband, and while a Christian husband can accept grudgingly yielded sex – it does not make it right on the part of the wife to have such a horrible attitude.”

If nausea and an impending migraine haven’t already compelled you to quit reading, brace yourself for one of the most disturbing examples of spiritual abuse. It’s exactly this sort of twisted, hateful, perverse religious coercion which makes support and recovery groups like No Longer Quivering’s Spiritual Abuse Survivor Blogs Network necessary:

There you have it, Christian wives … submitting to marital rape makes Jesus happy.

The desperate woman who (unfortunately) asked for help in her abusive marriage stated that she even went so far as to get drunk so she could have sex with her husband. While Mr. Biblical Gender Roles called the husband’s behavior “wrong,” he goes on to blame the wife because “she needed to exercise restraint and not engage in getting drunk.”

And then there’s this:

“Is her husband raping her or abusing her by having sex with her when she is not in the mood?

Aside from his physically harming her by forcing himself upon her no he is NOT abusing his wife from a Biblical perspective. Even if he did physically force himself upon her – it is IMPOSSIBLE Biblically speaking for a man to rape his wife. Abuse? Yes. Rape? No.”

Even when a Christian wife submits to unwanted sex out of obedience to God, she still may not be fully pleasing the Lord, as Mr. Biblical Gender Roles concludes, “But it is very possible that even if she yields to him – there is still sin on her part. If she acts disgusted by him and acts like he has no right to have sex with her – then the sin lies squarely in her court.”

I wish I could say the teachings at “Biblical Gender Roles” are a rare and extreme interpretation of biblical manhood and womanhood in American contemporary Christian community, but while the anonymous fundamentalist writer lacks much of the subtly and sugar coating of more established and prominent ministries, his interpretations and instruction are not misrepresentative of the “biblical” advice which married couples who seek Christian counselling for relational problems encounter on a daily basis.

For more information regarding spiritual abuse, check out the survivor stories at No Longer Quivering. Go here, for practical help and resources available to victims of abuse.